The US May Conduct A Review Of Its Strategy In Afghanistan, For The 50,000th Time

The U.S. military is preparing to conduct a review of its strategy in Afghanistan for what is probably the 50,000th... 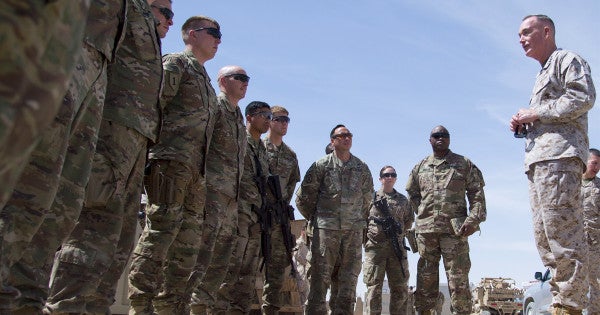 The U.S. military is preparing to conduct a review of its strategy in Afghanistan for what is probably the 50,000th time in the 17-year-long conflict.

Reuters reported Tuesday the White House hadn't yet formally ordered a review, but several officials said preparations are being made for a “government-wide appraisal” within the next few months. The news comes as President Trump has reportedly expressed “frustration” over his August 2017 Afghanistan strategy's mediocre results — and weeks after Lt. Gen. Austin S. Miller, a former Army special operations officer, was confirmed by the Senate to take command in Afghanistan and receive his fourth star.

The general was careful not to talk about “turning points” or offer a timeline during his confirmation hearing. Instead, he forged a new line of reasoning for a continued presence there: to stop the next 9/11 — a logical leap that doesn't pass the smell test.

Miller will be the 17th commander in Afghanistan (yes, 17), taking the reins from Gen. John Nicholson. A strategy review once he takes over is pretty much par for the course at this point; it will likely uncover plenty of problems with Afghanistan's security forces, government corruption, and lack of infrastructure and security in rural areas — all issues that have vexed U.S. commanders for many years.

As The American Conservative points out, the next few steps are fairly predictable:

Sadly, we’ve now seen this movie over and over again for over a decade and a half. In the first scene, a decorated general is appointed by the president to turn the war around. Act II involves a few glowing profiles in the media about the new commander’s unique traits as a thinker, an innovator, and a warfighter. The American people are told that perhaps this particular commanding officer will be the one to sprinkle fairy dust over the war and transform an unwinnable conflict into something the White House can call a victory.

It wasn’t too long ago when General McChrystal was giving interviews to 60 Minutes onboard his helicopter talking about his “government in a box” initiative and stressing the absolute imperative of reconnecting the Afghan population to their government. After that, General David Petraeus, hailed as the most influential officer of his generation, was tapped by President Obama as McChrystal’s replacement and popularized by commentators and lawmakers as America’s last, best hope to win a war that was going in the wrong direction. More recently, the Washington Post published a profile on now-outgoing commander John Nicholson as the American officer who would use his deep understanding of Afghan society and culture to ride the U.S. to success.

“This campaign will not be resolved by military means alone,” Miller told the Senate in June. “There has to be a political component that takes place here.”

Although he was speaking about the politics of Afghan governance and, perhaps, bringing the Taliban to the negotiating table, the political component that's actually needed is a president and a Congress with a backbone to get us the hell out of there.

Sadly, that isn't going to happen.