"We want partners, not adversaries," Trump said in an address before world leaders at the United Nations General Assembly 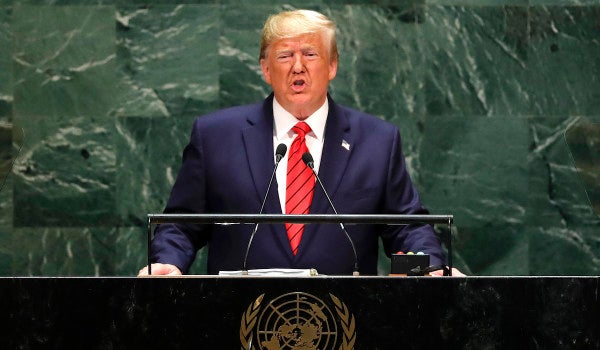 UNITED NATIONS (Reuters) – President Donald Trump denounced Iran's “blood lust” and called on other nations to join the United States to pressure Iran after attacks on Saudi oil facilities but said there is a path to peace.

“We want partners, not adversaries,” Trump said in an address before world leaders at the United Nations General Assembly.

Trump also had a stern message for China and its president, Xi Jinping, in what was his third annual appearance at the U.N. saying the world is watching how Beijing handles mass demonstrations in Hong Kong that has raised concerns about a potential Chinese crackdown.

“How China chooses to handle the situation will say a great deal about its role in the word in the future. We are all counting on President Xi as a great leader,” he said.

The Sept. 14 attacks in Saudi Arabia have rattled the Middle East and raised concerns about a broader war. Trump has shown restraint in the crisis, holding back from military retaliation, at least for now.

“All nations have a duty to act. No responsible government should subsidize Iran's blood lust. As long as Iran's menacing behavior continues sanctions will not be lifted, they will be tightened,” Trump said.

He urged Gulf allies to normalize relations with Israel to provide a regional counterweight to Iran.

With the president looking to improve his standing among Americans as he looks ahead to a tough re-election battle next year, Trump aimed to present a reassuring message to ease voters' concerns about his tendency toward inflammatory rhetoric.

Trump offered a more toned-down message compared to the bombast of his previous speeches to the world body in 2017 and 2018 while stressing the United States military remains the world's mightiest.

Still, he was tough on Iran and its leadership, with Iranian President Hassan Rouhani in New York for U.N. activities amid speculation about whether they might meet to discuss their differences.

Rouhani was at his New York hotel, not in the U.N. chamber, during Trump's speech.

In remarks to media on Tuesday, Rouhani said he was open to discuss small changes, additions or amendments to a 2015 nuclear deal between Iran and six major powers if the United States lifted sanctions imposed on the Islamic republic.

Tehran has been widely blamed for the attacks in Saudi Arabia but it denies involvement. Over the past week, Trump has tightened economic sanctions on Iran and ordered more U.S. troops to Saudi Arabia and the United Arab Emirates in a show of support for those U.S. allies in the tense region.

“After four decades of failure it is time for Iran's leaders to step forward and to stop threatening other countries and focus on building up their own country,” Trump said.

“America is ready to embrace friendship to all who genuinely seek peace and respect,” he said.

Trump has sought to pressure China to agree to reduce trade barriers through a policy of increasing tariffs on Chinese products.

“Hopefully we can reach an agreement that will be beneficial to both countries. But as I have made clear I will not accept a bad deal for the American people,” Trump said.