Tulsi Gabbard: ‘Defeating ISIS Has Nothing To Do With Party Politics’

In the wake of the Nov. 14 Paris terror attacks, Rep. Tulsi Gabbard of Hawaii has become an outspoken critic... 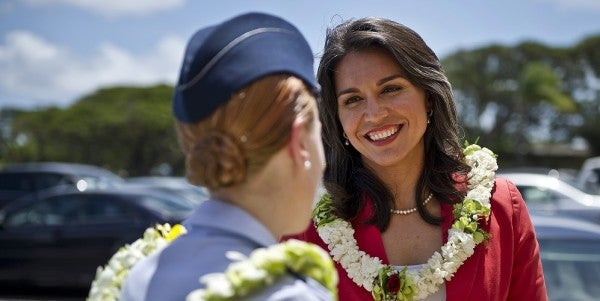 In the wake of the Nov. 14 Paris terror attacks, Rep. Tulsi Gabbard of Hawaii has become an outspoken critic President Barack Obama’s policies in Syria. Gabbard, who serves as a major in the Army National Guard, has argued that U.S.-led efforts to oust Syrian President Bashar al-Assad should cease as his removal from power may destabilize the country even more. Gabbard has even introduced legislation to defund efforts to overthrow him.

“My responsibility is to the people of Hawaii and the American people to stand up and fight for what is right and what is in the best interest of our country,” she said in a Nov. 24 interview. “That has nothing to do with party politics.”

Gabbard is a rising star among Democrats, and was the first Hindu and the first American Samoan elected to Congress, as well as one of the first female combat veterans, reports The New York Times