Why We Fight: It’s Not Always Because We Face An Enemy

When looking at interstate wars, conflict between groups may actually be more about internal group dynamics than about the actions... 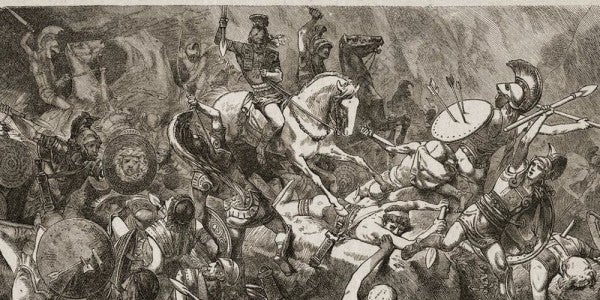 When looking at interstate wars, conflict between groups may actually be more about internal group dynamics than about the actions of the other side. Thus, much as groups will fight back when threatened by others, if war is motived by a threat to individuals’ sense of belonging to a cohesive group, then they will fight to reestablish their own group’s cohesion. The same goes for leaders seeking to reinforce their internal status in their groups. If the group problems are not being adequately solved in a particular group, then war is about re-establishing coherence, or ‘order’, around the solutions—re-establishing the group’s internal cognitive clarity. In this argument, the enemy is, in fact, tangential to the motivating force of the war. I would like to highlight two current trends that further illustrate this argument.

The first is the feeling in many parts of the increasingly globalized world that cultures and religions are being disrupted by technology and/or migration. This has resulted in people flocking to new global movements, like revivalist religions, as old structures break down. Groups can now be arranged horizontally across the Internet, rather than vertically in the real world. In many cases, this loss of identity is keenly felt and has contributed to some of the turbulence in (especially) European and American politics in the second decade of the twenty-first century. We can find analogous events in human history, such as the Wars of Religion in seventeenth-century Europe, when Protestantism and Catholicism vied for supremacy in small part because of the disruption wrought by the printing press. This technological innovation had democratized religion, allowing more widespread vernacular translations of the Bible.

The second trend is that described in Thomas Piketty’s Capital in the Twenty-First Century. Piketty amasses a wealth of data to show that, over the long run, the rate of return on capital (for example, the rent received from land) outstrips the growth rate of the economy (GDP growth). This means that capital accumulates over time in the economy, and thus the ratio of capital to income gradually increases, so that the society becomes more unequal (because capital is more likely owned by those with high status). Eventually, the ratio will be reset—and the major activity that resets the capital to income ratio is war. Military expenditure and taxation to pay for it completely disrupt this accumulation of capital—money is fired into the sky and blown up on the battlefield. By definition, then, war reduces inequality in the societies fighting it, because it destroys the peacetime accumulation of capital—resources—among those with high status. The previous peak—when capital reached up to 700% of annual income— was just before World War One. During the war itself, it declined to around 300–400%, and then again during the 1930s Depression and World War Two to around 200–300%. The ratio has been climbing ever since; it sat around 500% in 2010, and has now risen beyond that level.

The arguments I lay out in my book, Why We Fight, also have implications for our understanding of the dynamics of civil wars. The definition of a civil war is one between two groups that were, until just before the start of hostilities, previously one group, or subject to the same overall leadership (sovereignty). In the modern day, the two sides will fight each other whilst remaining part of the same legal entity (nation-state). Civil wars are known for their particular barbarity, brutality, and viciousness. Why?

I argue that this is because, in a civil war, people lose the membership of their primary group—the group, we might assume, that solves the five group problems for them. Humans are very strongly motivated to belong to a social group, and so when nations collapse they turn elsewhere. This usually occurs while their new group, be it ethnic, religious, tribal, ideological or geographical, is under attack. They then have to confirm their membership of one of the groups party to the civil war and prove to others in their new group that they are worthy of group membership. For the groupishness mechanism, this is the most challenging situation possible—not being a member of any group—and requires motivating the individual to carry out desperate (~brutally violent) measures to re-establish belonging within a new group.

Analysis
opinion
The Long March
voices
why we fight