I fought in Afghanistan. Those who served there always feared it would fall apart

Our politicians threw us into another war with no end state, no exit strategy, and no purpose. 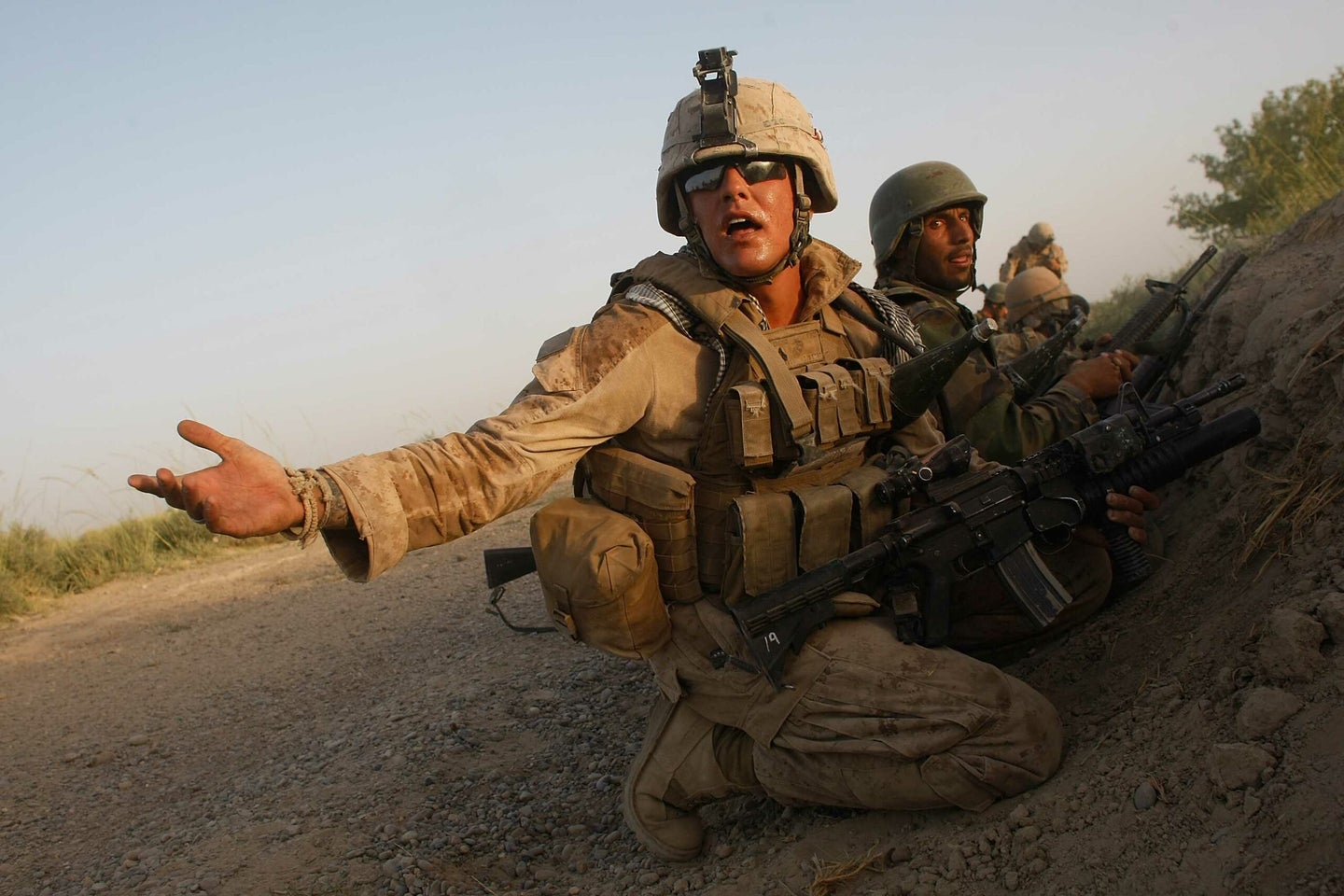 MIAN POSHTEH, AFGHANISTAN- JULY 17: U.S. Marines with the 2nd Marine Expeditionary Brigade, RCT 2nd Battalion 8th Marines Echo Co. and an Afghan soldier take cover after taking enemy fire near where an IED was detonated on July 17, 2009 in Mian Poshteh, Afghanistan. The Marines are part of Operation Khanjari which was launched to take areas in the Southern Helmand Province that Taliban fighters are using as a resupply route and to help the local Afghan population prepare for the upcoming presidential elections. (Photo by Joe Raedle/Getty Images).
SHARE

As the world learns that the Taliban has taken over Afghanistan and we evacuate the last Americans from Kabul, I find myself as many veterans of this war do, emotionally numb. I’ve known this day was coming for 10 years. That may come as a surprise to most non-veteran Americans. Whenever I said this would happen, my viewpoint was so far from their understood reality, it would be dismissed as inconceivable.

1st Battalion, 2nd Marine Regiment took over Musa Qal’eh Afghanistan from Britain’s Household Cavalry Regiment in March 2010. Serving alongside my fellow Marines through the next seven months will always be one of the most challenging yet proudest times of my life. Proudest mostly of the men of extreme valor, courage, and bravery that I had the honor of serving with. Challenging because 11 years ago we discovered our mostly undefined “counterinsurgency” mission was impossible to achieve.

A good interpreter interacting with the locals might let you in that the locals were confused about our presence there. A great interpreter would take the time to explain to you that outside of a few select people tied directly to the government, many locals were confused by even the mention of Afghanistan. They identified themselves as “Pashtuns” and if asked where they lived, believed they were in “Pashtunistan,” encompassing a region that is parts of Southern Afghanistan and Pakistan. This isn’t like visiting a state where they say something like “This ain’t America, it’s Texas.” The people truly did not identify in any way as Afghans.

The laws they either chose not to follow or didn’t even know existed demonstrated this better than their words. Marijuana plants grew in the district center despite being outright banned. But more importantly, the poppy was the primary crop, and poppy tar for heroin/opium was the economic engine of the region. It was openly and freely grown and traded without question despite being illegal under Afghan law.

We had our victories in the region, such as helping locals with medical assistance, expanding the economy, and bringing a better sense of security during our time there. But whenever we expanded our area of influence, there seemed to be a pattern. After about three weeks of trying to directly fight us, the enemy usually realized it was a futile effort. Most then put away their guns, stopped trying to fight us head-on, and planted IEDs at night — continuing their poppy trade without fighting us. We were leaving their poppy trade untouched so as “not to affect the locals’ way of life.” This was how they would win — not by attrition warfare to the last man — by continuing their business and making as much money as they could until we finally left.

Our battalion returned home in September 2010. I was going out, as General Mattis was coming in. He sent an envoy to Camp Leatherneck and asked for outgoing company commanders to debrief members of his staff. Sitting with a fellow captain from our deployment, I looked across a table at a two- and three- star general with only one point written out that had to be made: “If we don’t stop the poppy, if we don’t shut down the Taliban’s illegal drug business, we might as well leave now. They will put down their guns, not fight us, continue business as usual, and then the day we leave pick back up their guns and take over. In the end we will achieve nothing if we don’t stop their poppy trade.” I saw a press release or article several months later that mentioned considering options to take a harder line against poppy, but in the end, little was done.

After a few years, American forces withdrew from the region, the police chief who held the city together, Commander Koka had been attacked in his police headquarters, and the city was clearly in the grips of the Taliban. When news spread among veterans from the battalion, many shared a similar question and answer session as you hear across America today: “what was it all for?” I struggled for years to answer that question, even amongst private conversations with fellow veterans, mostly due to wanting to upkeep the honor of our fallen brothers, for their memory but also for their families.

The father of a fallen Marine pulled me aside years after our deployment at a memorial service. As if he could read my mind, he read the questions going through my head back to me: “What did he die for? I know — he died for his brothers, he died fighting for his country, he died doing what he loved. But what’s happening over there? Why was he there? Why were you there?”

There was a pause that seemed to last forever, for a question that now seems will go unanswered forever. Before I could think of what to say, he realized that he had been asking me these questions instead of sharing them with me out of frustration and anger, which was his intent. In the end, he told me there was no answer, and that he had finally accepted that.

I spent years of my life trying to find meaning in Afghanistan. Trying to make sense of it for others, trying to help give a broader purpose to it. But in that moment, with that Gold Star father, my conscience was finally wiped clean. If a father who lost his son feels it and can say it, then I can too. Those who fought, killed, were injured, or died in Afghanistan did so bravely in service to their country and for the brothers and sisters beside them. But our politicians threw us into another war with no end state, no exit strategy, and no purpose.

From one Marine who has seen combat to all those who decide when we will fight again: let this be the last time we are forced to fight, kill, and if needed, die without purpose or plan.