We need more patriotic Americans willing to serve in our armed forces — and fewer ignorant politicians making their job harder. 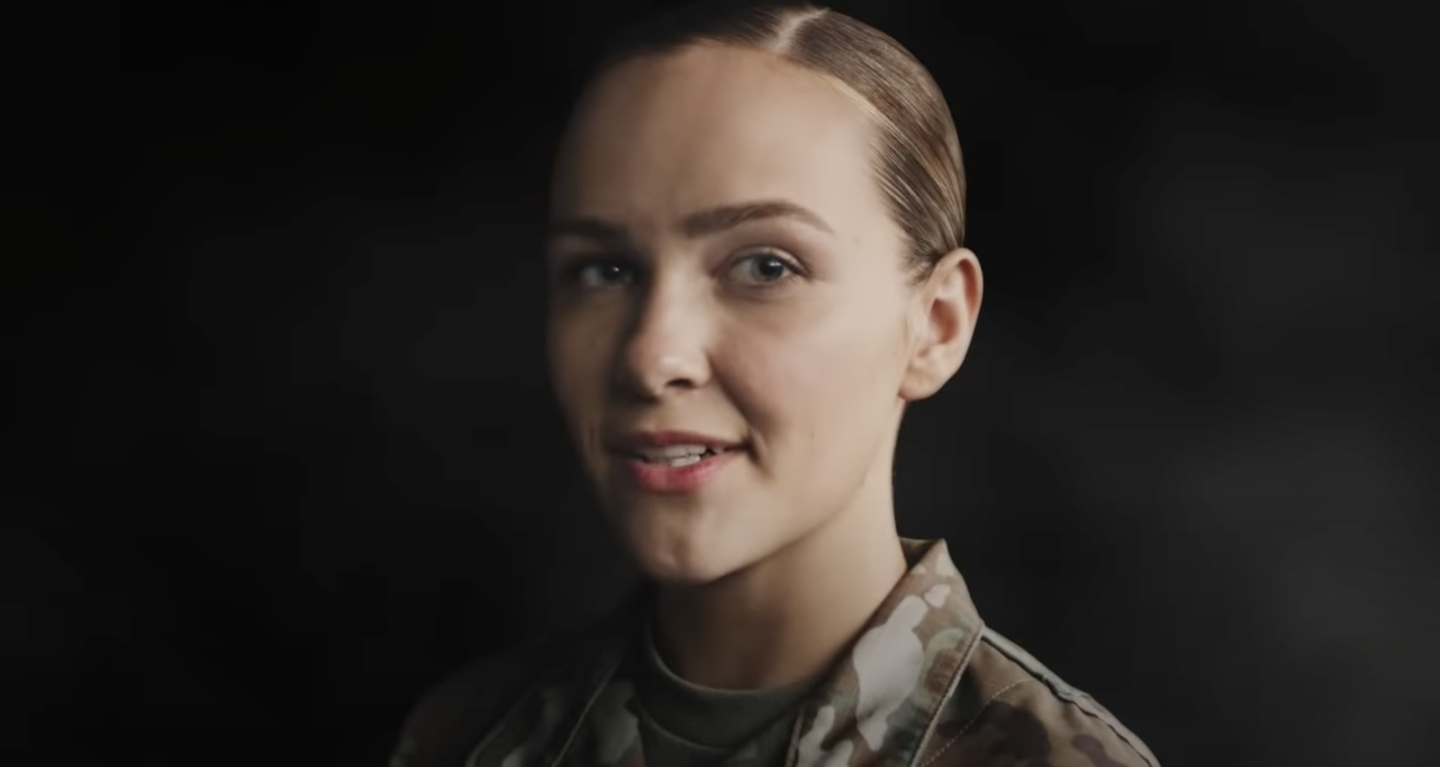 Holy crap. Texas Republican Sen. Ted Cruz recently shared deceptively-edited Russian propaganda to attack an Army corporal after she had the audacity to publicly reveal how she came to join the U.S. Army for a new recruiting effort.

Despite Cruz’s claim that Cpl. Emma Malonelord’s story of growing up with two mothers before joining the Army is an example of a “woke, emasculated military,” the truth is that we need more patriotic Americans like her willing to serve in our armed forces — and fewer ignorant politicians like Cruz making their job harder.

“There are different issues that we face with recruiting,” said Laura DeFrancisco, a spokesperson for Army marketing. “A lot of people don’t even think about the Army as an option,” she said.

Malonelord was one of five soldiers who voluntarily shared how they were called to serve for a recruiting campaign known as “The Calling,” a video series targeting 17 to 24-year-old Generation Z recruits that debuted exclusively on YouTube earlier this month. The Army disabled comments on YouTube after people made “borderline abusive” remarks toward soldiers in the video, DeFrancisco said, with Malonelord bearing the brunt of hateful commentary.

“To be critical of the campaign, that’s one thing,” said DeFrancisco. “We can deal with that. But when they were attacking the soldiers, no.”

As DeFrancisco explained, the Army selected soldiers for the campaign who had compelling stories that resonated with focus groups. Officials found a soldier telling their own story “means so much more to this age group,” DeFrancisco said. “These kids are smart. They see right through. Authenticity is incredibly important.”

“This is the story of a soldier who operates your nation’s Patriot Missile Defense System,” begins the narration of a two-minute-long video called “Emma,” which does not appear in the cut-down version Cruz shared on Twitter that left out important context.

In the Army video, Malonelord talks about being raised by her two mothers in California and how she marched for equality. “I like to think I’ve been defending freedom from an early age.”

She then describes a frightening experience as a child: When she was six, one of her moms was injured in an accident and doctors said she might not be able to walk again. “But she tapped into my family’s pride to get back on her feet, eventually standing at the altar to marry my other mom,” Malonelord says.

Malonelord credited her parents as “powerful role models” that helped push her to the top of her high school class. She went to The University of California-Davis and joined a sorority, but as graduation neared she felt like she needed her “own challenge” and met with an Army recruiter. “I’m U.S. Army Cpl. Emma Malonelord and I answered my calling,” she says as the real soldier behind the animation is revealed.

The videos are just one of the hundreds of messages Army Recruiting Command pushes out to potential applicants. Clips show life in the Army band, how soldiers can join the human resources field, and detail the rigorous and “challenging” training of Army Rangers. The point is, there are many jobs in the Army, and very few of them require American soldiers to look or act like the unthinking automatons featured in the Russian military commercial shared by Cruz. They also don’t need to jump through flaming hoops, either.

So what exactly is “woke” or “emasculating” to the U.S. military — which Cruz has no personal experience serving in — about Malonelord’s story? Is it the fact that she has lesbian parents? That she supports equal rights? Or is it that Malonelord is a woman in an overwhelmingly male military? Cruz didn’t elaborate, except to say that we have the “greatest military on earth” but Democratic politicians and “woke media” were trying to “turn them into pansies.”

“A senator called a US Army corporal who dared to tell her story in an Army ad a ‘pansy’ in order to score political points,” one Army officer responded on Twitter. “That is not right.”

“The origin story of any young, white male is called the American Dream,” 1st Lt. Kait Abbott, an Army National Guardsman, told Military.com. “Why does it become ‘woke’ when that story doesn’t quite fit the narrative?”

In a statement to Military.com, Cruz’s communications director Erin Perrine said the media was “politicizing” the armed forces to “promote a woke agenda.”

“Our military should be focused on winning wars, and we endanger our national security and our service members when they focus on anything else,” said Perrine.

Indeed, the military is focused on winning wars. Especially one it’s preparing for in the Pacific with China, which has the largest standing ground military force in the world. The U.S. Army needs highly-trained infantrymen on the front lines. It also needs soldiers serving as intelligence and logistics specialists, geospatial engineers, cyberwarfare technicians, or air defense enhanced early warning system operators like Malonelord to fight and win against a far more sophisticated opponent in Beijing than what U.S. troops faced in Iraq and Afghanistan.

“We are a better Army because of our Soldiers like Cpl. Malonelord,” said Col. Daniel Blackmon, an artillery brigade commander at Fort Sill. “She and many others like her stand guard to defend our nation and do it well.”

The U.S. military is a cross-section of the country it serves. There are about 1.3 million Americans currently serving on active duty who took an oath to support and defend our country. Fewer than 20% of them are women. Some are Black or Brown. Most of them are White men. And yet each year, the military services have to find 175,000 new men and women of all colors, creeds and cultural backgrounds to voluntarily enlist in America’s professional military — unlike Russia’s heavily conscripted one — at a time when the pool of qualified applicants is growing smaller.

“Our only agenda is to expose the Army to people who may not otherwise think about it,” DeFrancisco said. “There are people here from all walks of life and all kinds of backgrounds.”

As Adam Linehan extensively reported for Task & Purpose in 2017, recruiting has become one of the most important jobs in the military, and arguably, one of the toughest. Despite Americans’ overwhelming support for the military, Pentagon surveys show that nearly 90% of youth said they would “probably not” or “definitely not” enlist.

“A significant proportion of our nation believe joining the military is a good choice for someone else,” a senior Pentagon official said in 2019.

Meanwhile, the conservative Heritage Foundation warned in 2018 that “over 24 million of the 34 million people” who are eligible to serve “cannot join the armed forces—even if they wanted to.” Why? Low levels of education, criminal records, poor health, and physical inactivity mostly, the latter having been reported as a “substantial obstacle for military recruitment” to members of Congress.

“This is an alarming situation that threatens the country’s fundamental national security,” wrote Heritage. So alarming in fact, that a nonpartisan organization of nearly 800 retired admirals and generals called on Trump’s Acting Defense Secretary Chris Miller last year to do something about it, saying that some 71% of young Americans were unable to serve “because they are too poorly educated, too overweight, or have a history of crime or substance abuse.”

All this comes at a time when Cruz and many lawmakers call for hundreds of ships to be added to the Navy’s fleet. Needless to say, it takes qualified people to crew those ships. The Army needs men like 1st Lt. David Toguchi, another soldier profiled in “The Calling” videos, ferrying troops and supplies to the battlefield as a Chinook helicopter pilot. It needs women like Spc. Jennifer Liriano, also in the series, to sign up and serve as a nurse. And it needs people like Emma Malonelord to voluntarily raise their right hand and swear an oath to defend the Constitution before going through 21 weeks of training on radar and computer electronics, data analysis, and tracking incoming enemy missile attacks and aerial surveillance. They all joined for different reasons, but unlike many Russian soldiers, none of them were forced into service.

“CPL Malonelord is an amazing Soldier and we’re proud to serve alongside her in the Dragon Brigade,” said Col. Glenn Henke, commander of the 35th Air Defense Artillery Brigade to which Malonelord is assigned in South Korea. “My [command sergeant major] and I have had the privilege of telling her this in person.”

So if supporting Cpl. Malonelord and other American soldiers over Russians is somehow “woke,” then give me another shot of espresso. Because it looks like I’ll be staying up for a while.

Watch next: A service member talks about being transgender and his support network