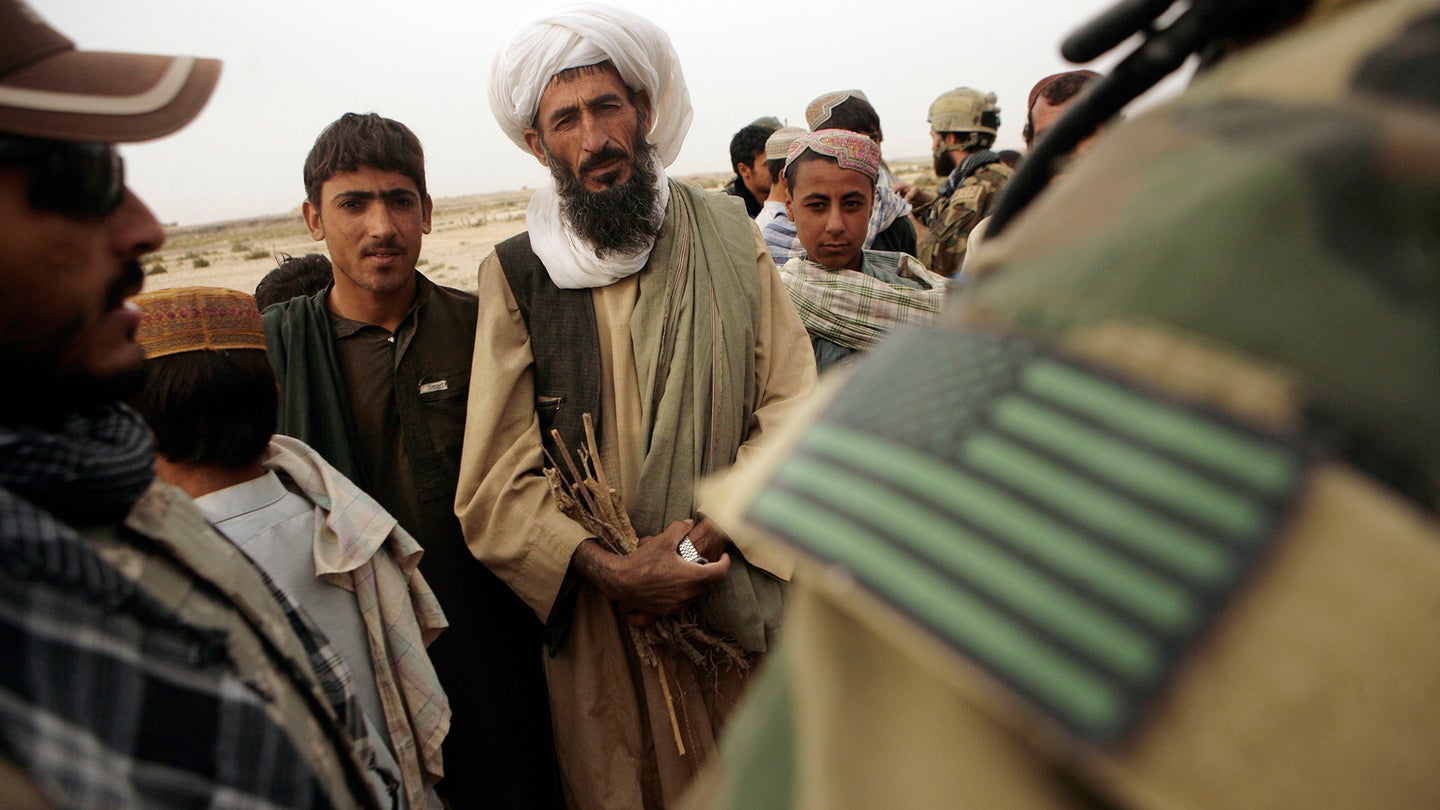 FILE PHOTO: An Afghan man speaks to a member of U.S. special operations forces with the help of an interpreter in Afghanistan's Farah province, Sunday, Nov. 1, 2009. (AP Photo/Maya Alleruzzo).
SHARE

On Thursday, I received a series of frantic texts from Sher Ahmad Ahmadzai, an Afghan man who worked for coalition forces, after someone threw a Molotov cocktail at his home. He included a picture of his son’s hand, which was burned.

Then I listened to his voicemail. He was crying as he said he had a “big problem” and did not know what to do. He asked me to help him and his family.

Ahmadzai, a former interpreter, is one of several Afghans who have reached out to me in recent weeks as I’ve written about Afghans who have helped the United States over the past 20 years but are unable to secure visas allowing them to get out of the country due to bureaucratic issues.

Afghans who are not in the process of getting a Special Immigrant Visa have no hope of being evacuated as part of Operation Allies Refuge. Even if they are in the application pipeline, Afghans would still have to get to Kabul to be flown out of the country, and Taliban checkpoints make the journey to the city extremely dangerous.

In addition to writing about Ahmadzai, I’ve tried to help him get a new letter of recommendation for his visa application. It has turned out to be much more difficult than I expected in part because the medical evacuation company he worked for years ago no longer exists. Letters of recommendation must be written in a precise way and even the most minor error causes visa applications to be summarily denied.

Advocacy groups are also working with Ahmadzi but the fact is the situation in Afghanistan is very bad and there is little that anyone can do for the Afghans left behind now that the U.S. military has withdrawn most of its troops from the country.

This story is difficult to write because journalists are rightly expected to not get involved in the stories we cover, and the modicum of help that I have tried to provide to Ahmadzai clouds my objectivity. In a way, I’ve already failed at my job.

My father, who spent nearly 40 years in the news business, once told me that reporters are the conduits through which stories are told.

We don’t solve murders. We don’t put out fires. We are ethically bound to be passive. Our responsibility is to report the news accurately and truthfully. We are never the story. And we don’t get involved.

My obligation is to let the world know about the Afghans whom America has left behind. Each one has a family that is also in danger. These are the stories that many in power would hope that you don’t read because they shatter the myth that the United States is doing all it can to save Afghans who are in danger of being murdered by the Taliban.

Once at the Pentagon, I heard another reporter say our job is to report the problems and it’s up to the powers that be to fix them. Sometimes, that happens, such as when the Washington Post and Army Times revealed atrocious conditions wounded service members faced at Walter Reed Army Medical Center.

But the crush of news coming from television and social media has had a numbing effect on the American public. We can no longer be shocked. We shrug after every mass shooting because we know nothing will change.

The reality is no matter how many Afghans plead for help, U.S. government officials are not likely to make any meaningful action. They don’t have to. News about Afghanistan rarely gets on television, the medium of choice for the ruling class.

The only way I can truly help Ahmadzai and the other Afghans who feel the Taliban closing in is to tell their stories. If the U.S. government officials in charge of the ongoing evacuation fail to rescue all the Afghans in danger, I can guarantee I will report that story too.

Still, that doesn’t feel like enough. I’ve been watching clips of Schindler’s List recently, including the scene in which Oskar Schindler dictates the names of the hundreds of Jews that he is about to save from Auschwitz.

I’ve also been thinking about Raoul Wallenberg, a Swedish diplomat who saved thousands of Jews from Budapest towards the end of World War II. He died in a Soviet prison in 1947.

But I’m not Schindler. I’m not Wallenberg either. I’m just a no-name reporter who is powerless to help a man and his family.