It’s time to admit the US is abandoning Afghanistan

We’re at the end. 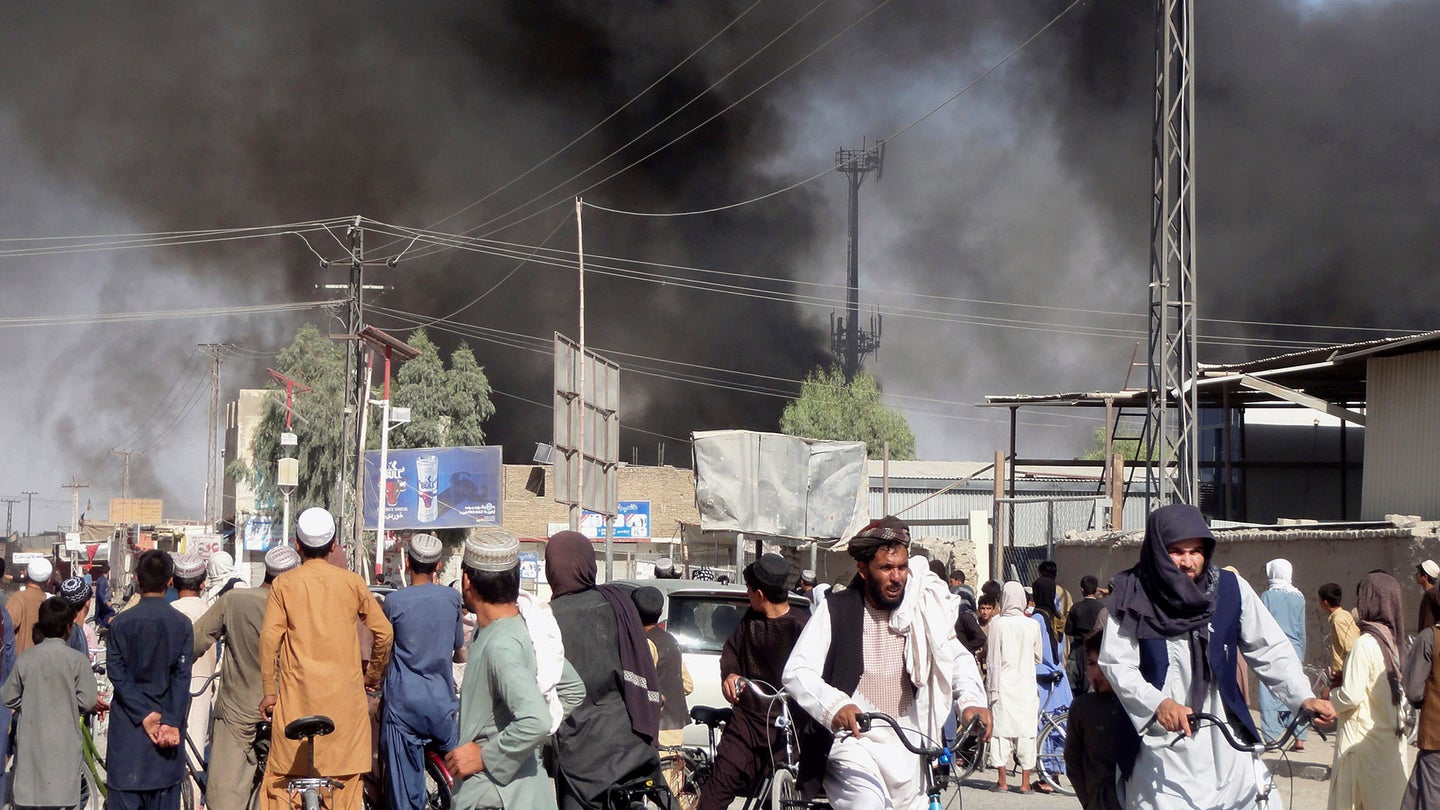 Smoke rises after fighting between the Taliban and Afghan security personnel in the city of Kandahar, southwest of Kabul, Afghanistan, Thursday, Aug. 12, 2021. (AP Photo/Sidiqullah Khan).
SHARE

We’re at the end. This is the moment long predicted and just as long feared. The United States is leaving Afghanistan amid the Taliban’s onslaught. We have been defeated, and the tens of thousands of Afghans who bravely supported the Americans for two decades await their executioners.

On Saturday, the Taliban captured the strategically important city of Mazar-i-Sharif. Afghanistan is slipping away so rapidly that the only question now is whether Afghanistan’s capital city can hold out for days or a week.

Roughly 3,000 soldiers and Marines are headed to Hamid Karzai International Airport to help evacuate the U.S. embassy in Kabul by the end of August. Another 3,500 to 4,000 soldiers will be in Kuwait in case they are needed at the airport as well.

Perhaps to avoid a mass panic in Afghanistan’s capital, President Joe Biden’s administration is going to Orwellian lengths to claim the U.S. government is not leaving Afghans to face the cruel Taliban victors on their own.

“This is not abandonment,” State Department spokesman Ned Price told reporters on Thursday. “This is not an evacuation. This is not the wholesale withdrawal. What this is is a reduction in the size of our civilian footprint. This is a drawdown of civilian Americans who will in many cases be able to perform their important functions elsewhere, whether that’s in the United States or elsewhere in the region.”

The facts on the ground indicate otherwise. NPR Pentagon correspondent Tom Bowman revealed on Friday that most staffers at the U.S. embassy in Kabul are leaving and they are getting ready to destroy sensitive documents, computers, and phones.

Even if some consular officials remain in Afghanistan, it is hard to imagine how they can continue to process the Special Immigrant Visa applications for Afghans who have worked for the U.S. government and desperately need to get out.

But the evacuation effort just began last month with the first Afghans arriving at Fort Lee, Virginia, on July 30. As of Thursday, about 1,200 visa applicants and their families have arrived in the United States, according to the State Department.

The U.S. military expects to be able to “move thousands per day” as part of its mission to help evacuate the embassy in Kabul, Pentagon spokesman John Kirby said on Friday.

Notably, Kirby did say how many of those passengers would be Afghans.

“I think you can surmise that when I say ‘thousands’ of people, that would include a population of Afghans, of course, that are being processed through the Special Immigrant Visa program, including their families,” Kirby said.

It has become abundantly clear that Biden waited far too long to begin rescuing Afghans in danger. In little over a week, the Taliban has captured most of Afghanistan’s 34 provincial capitals including the country’s second and third largest cities: Kandahar and Herat.

While Price said the State Department is continuing to “ramp up” processing of visa applications, most of the Afghans who need to get out find themselves in the position of standing on the deck of the Titanic as the first-class passengers fill the few available lifeboats.

The non-profit group No One Left Behind is taking matters into its own hands, said James Miervaldis, chairman of the group’s board.

With the help of a recent $500,000 donation from philanthropist Greg Perlman, the group is paying the costs for 40 Afghan families to fly to the United States, Miervaldis said.

“My wife and I felt it was our moral obligation to pay for the flights of these families and also give them $500 upon arrival to help them settle in this new country,” Perlman said. “Our sole goal is to lead and inspire other patriotic folks to do the same. If you love our U.S. military then we urge you to join us in helping save the lives of these interpreters and other people who took the risk to serve our military and are now certain to be hunted down and killed as traitors if we can’t get them out of Afghanistan quickly.”

Five of the Afghan families have already reached safety and the remaining 35 are expected to fly commercially to the United States, said Miervaldis, who added his group is looking at chartering its own aircraft.

“These families had visas but were not contacted by the embassy about evacuation, so it’s just a completely chaotic environment at the moment,” Miervaldis said.

Miervaldis also said he does not know for how much longer it will be possible to fly out of Kabul’s international airport because many commercial airlines have lost their insurance policies for flying there since Biden announced the troop withdrawal.

Based on the most recent comments by U.S. officials, it appears the Biden administration will continue to pretend the outcome in Afghanistan is not inevitable right up to the point when the Taliban inevitably hoist their flag over the presidential palace in Kabul.

This is Biden’s Saigon moment. Many people in previous administrations bear a lot of the responsibility for this outcome, but it is happening on his watch. The U.S. government’s ongoing farce that a negotiated settlement with the Taliban is still possible has become more than a cruel joke. It’s an outright lie.

We are witnessing one of the biggest failures in American foreign policy’s history play out in real time. Instead of trying to pretend we’re not at the end, the Biden administration should use every available hour before Kabul falls to save as many Afghans as possible, regardless of whether they are being processed for a visa.

This is life and death. We’re beyond political spin at this point.