Editor’s Note: The following story highlights veterans at Verizon. Committed to including talented members of the military community in its... 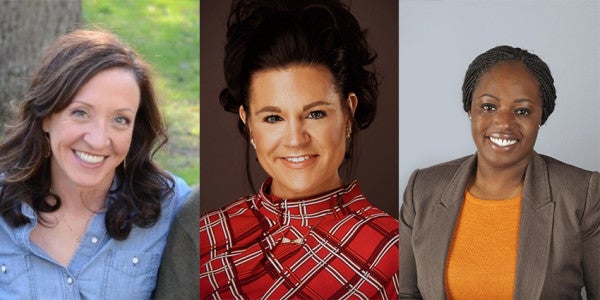 Editor’s Note: The following story highlights veterans at Verizon. Committed to including talented members of the military community in its workplace, Verizon is a client of Hirepurpose, a Task & Purpose sister company. Learn more here.

Named the number one Military Friendly® Company for 2018, Verizon is following through on its promise to do more than thank veterans for their service. The corporation is helping transitioning service members launch thriving post-military careers.

Three female veterans share how they have found success in tech roles at Verizon, what they love most about the company, and why they would love to see more women join the ranks.

When Stacy McGarr realized she wasn’t ready for college yet, she shocked her family and friends by enlisting in the Navy.

“I went into a male-dominated field. It surprised a lot of people,” she remembers. “I was one of two women in the entire school. It was during that time that I really changed my study habits. I felt pressure to prove to myself and others that I deserved to be there.”

Upon graduating among the top five in her class, McGarr was selected to attend a specialized school to learn how to operate missile systems.

“That was really my first encounter with technology, and I enjoyed it,” she says.

Afterwards, McGarr went to work on the USS O’Bannon, where she faced gender-based road blocks to practicing her new, hard-earned skills on the job.

She explains, “Even after all that — graduating at the top of my class — the chief wouldn’t let me work on the missile system. I had to do the administrative tasks. I was very disappointed.”

McGarr’s career path changed when she discovered she was expecting her first child. A short time later, her baby’s father was killed on his way to meet his newborn son.

“It really came full circle. I used my GI Bill to go to college. I got my foot into Verizon, and the rest is history,” McGarr says.

In less than 20 years, McGarr has climbed the corporate ladder from Associate Engineer to Director of Engineering at Verizon. As she looks back on her journey, she credits much of her success to skills she gained while serving in the Navy.

“I think I took everything that I learned in the military — the good and the bad, the ability to learn how to swing at life’s curve balls, sometimes a hit, sometimes a miss, but either way— I used it as a growing opportunity. My experience pushed me to take the risks I needed to in order to move up in the business.”

Now, McGarr is using her story to help Verizon inspire a new generation of women veterans in technology.

She is also going to schools and workplaces to get young girls and women interested in STEM.

“And not just get them interested, but keep them interested,” she shares. “Society has pigeonholed women into certain fields. Verizon is very passionate about getting more women involved in this industry.”

“There is a sense of purpose in service, and you have more control in your career.” — Amy Bejtlich, Cyber Threat Intelligence

For Amy Bejtlich, a career in national security and intelligence was love at first sight.

“In college, I was a political science major, and I knew almost immediately I wanted to do intel,” she reveals. “I spent six years on active duty as an intel officer. After that, I worked as a contractor. I ultimately ended up at the FBI as a counter intel analyst.”

Even though she found a deep sense of purpose and fulfillment in her work, a lack of control over her roles and responsibilities kept her from accomplishing another life goal.

“The lack of flexibility was the biggest reason I left the military and FBI. I wanted to have a family,” she reveals.

Bejtlich met her husband of 20 years while serving in the Air Force.

“It was a tech school romance,” she shares. “I told him I wouldn’t start my family while we were on active duty because I didn’t want to be separated from my children.”

After a break in her career to become a mom, Bejtlich found the work/life balance she was looking for at Verizon.

“Verizon capitalizes on a lot of the strengths that you learn and practice when you are on active duty. There is a sense of purpose in service and the bigger picture, and you have more control in your career,” Bejtlich continues. “In the military, you often have to make certain concessions for career progression. When working for Verizon, being taken out of your primary career field isn’t a factor.”

Bejtlich shares she was first drawn to the Fortune 100’s company’s culture.

“The Air Force core values are ‘Integrity first, service before self, excellence in all we do.’”

At Verizon, our core values are similar: ‘Integrity, respect, excellence and accountability,’” she explains.

Bejtlich continues, “After the Hurricane in Puerto Rico, Verizon donated five million dollars for recovery efforts and sent teams out there to make sure self-service was available so people and first responders could communicate. On a day-to-day, I’m doing cyber security, but taking a step back, this touches people’s lives in a very real way.”

“Verizon understood the challenges I faced as a transitioning veteran and was willing to work with me.” — Shawnette Haynes, Local Manager

With retirement looming after more than two decades in the U.S. Army, Shawnette Haynes found herself unsure where to launch a post-military career.

“About a year out from separation, I attended the MOJO job fair,” Haynes shares. “I was so naive to the many different career opportunities you can have with Verizon. A recruiter took a look at my resume and said, ‘You are qualified for all of these positions.’”

When she got home, Haynes researched the company and local openings online, and what she learned caught her attention.

“There’s always room for growth. There’s room to delve into fields that I may not have prior experience with but know I could learn,” Haynes says. “Verizon provides great opportunities to take my skill set and grow as a professional. It’s right in line with the work I’ve done in the military.”

Haynes was even more impressed – and admittedly surprised – when the company worked to ease the fears and challenges she faced as a separating service member.

“When I interviewed in January 2017, I had to explain my situation,” she remembers. “Verizon understood the challenges I faced as transitioning veteran and was willing to work with me. They waited for me. That was the best thing of all.”

Now a local manager, she reflects on how many correlations helped make the transition from military to civilian culture as seamless as possible at Verizon.

“The structure and fast-paced environment; the field operations. Everything fit right in. You must be accustomed to constant change, and time management is key,” Haynes explains. “I already had these skill sets, so everything fell into line.”

If you are a woman veteran looking for professional opportunities after the military, there are a few reasons why Haynes urges you to consider pursuing a technology career at Verizon.

“Number one, you’re needed. Number two, the trepidation that you have as far as transferring from the culture of the military is diminished when you come to Verizon,” she says. “All the skill sets that you have are needed and transferable here.”

McGarr, Bejtlich and Haynes are three of many women veterans paving the way for more to find success in tech roles at Verizon. They’re rooting for you. Will you join them?