We’ve all heard it. It’s a constant across pretty much all branches of the service. And it usually centers on... 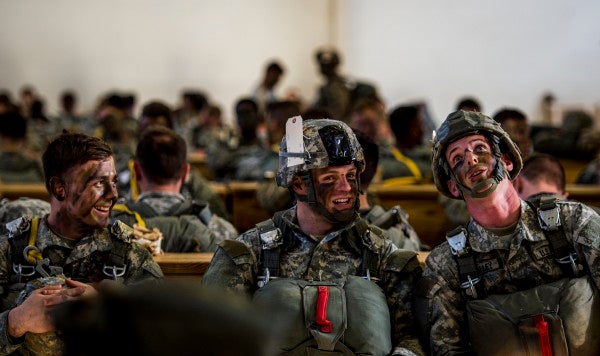 We’ve all heard it. It’s a constant across pretty much all branches of the service. And it usually centers on one person, someone whose delivery is just right, who can nail the timing, and who always has a good topic. And it invariably starts out this way: “No shit, there I was…”

That simple phrase contains within it the seeds of books, movies, plays, poetry, and music. In all probability, it is what Homer had as the first sentence of “The Odyssey” before his editor made him change it. It is how Siegfried Sassoon started out his war poems before he realized he was British and had to be more classy. Tolstoy would have started “War and Peace”that way, but he couldn’t figure out the right translation into Russian. At Valley Forge, it is probably why Baron von Steuben asked for someone to swear for him in English. It is the essence of beginning a good military story.

Because, at the heart of it, all military members are story tellers. This comes from several three factors that being in the military pretty much guarantees you’ll acquire: a mission, a story, and time. We all have a mission — whether it is the reason we joined, why we stay in, who we’re serving for — it doesn’t matter. Every service member carries with them a mission; otherwise, they wouldn’t be serving.

The second is the story. Good stories come from many sources — training exercises, deployments, drunk nights in the barracks, our own backgrounds, that one friend we all have who does some incredibly stupid things and is somehow still alive, our pets, our families — but they all one thing in common: They are easily relatable to others and are usually incredibly funny. Some people just excel at military storytelling. Southerners, especially, seem to have a natural talent to be able to draw in a crowd and keep them engaged. Every unit has at least one storyteller, the one person who can be found with a small crowd huddled around them, deeply engaged in listening. If they are a really good storyteller, you’ll find the company commander or first sergeant surreptitiously standing off to the side to listen.

Related: We Need To Come To Terms With This Generation’s True War Story »

Which brings me to the last element: time. We’ve all heard the old maxim, “Hurry up and wait.” There’s a lot of truth to this, as in eight years of Army experience, the constant has been waiting in lines, or waiting for meetings, or waiting before an exercise, or waiting before a convoy…well, you get the idea. Although the military is by nature a very active organization, we find ourselves in all sorts of situations with time to kill. Which is where the storytellers emerge. It might be as mundane as waiting in line for medical examinations, or it could be while sitting in an MRAP waiting for route clearance to show up. My own most vivid memories of Army storytelling come from one of my gunners, who could while away the long hours on Afghan roads with story after story.

Beyond the immediate and visceral need to pass time, storytelling meets a vital human need: to relate our cultural and personal experiences to a group, bring them into the story in an intimate setting, and reveal a shared identity. Stories can take relative strangers and turn them into friends, in just a few minutes. In the military, we share a common identity and purpose, one that is extremely profound: to protect and defend the Constitution and serve the people of the United States. As service members, we feel the need to share our experiences — both good and bad — to be able to add a human dimension to our larger purpose.

Stories serve as a way to bridge the gap between services, branches, and the civilian-military divide. Even after veterans transition, many still see the need to tell their stories, through memoirs, books, blogs, and poetry. It is a way of finding closure and healing unseen wounds brought about by war. Given that war, in its essence, is a series of unnatural actions carried out by humans, stories serve as a way for veterans to make sense of what they have experienced and translate that experience to those who have not lived it. It makes sense, then, that one of the oldest known forms of cultural experience going back to prehistoric times — cave drawings were a form of storytelling, much like latrine art, but that’s another story — would still be vitally important in our modern age.

So when you are out in the field, passing a group of junior enlisted huddled together wrapped in their woobies and cradling canteen cups full of awful coffee, and see a sergeant laconically throw in a dip and drawl, “So no shit, there I was…,” maybe slow your stride and listen: You might just catch a great story.