The military runs on the sweat and hard labor of its junior enlisted personnel. They do the crappy, and occasionally... 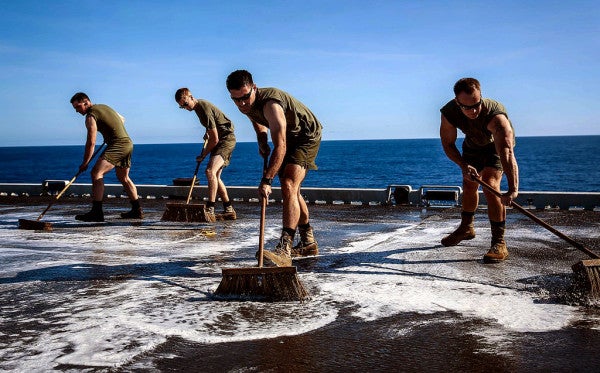 The military runs on the sweat and hard labor of its junior enlisted personnel. They do the crappy, and occasionally degrading jobs, for low pay. In many cases, those long days and tiny paychecks can be the totality of their time in the service, with many E-3s and below getting out after their first enlistment.

I enlisted in the Marines in 2008, and promptly separated four years later — could not wait for that freedom cake, and G.I Bill — but in that short time, I learned that you don’t have to have a lot or really, any rank, to get things done.

These are some suggestions on how to make the most of your time by blending the two key aspects of being a junior enlisted service member — you’re one of many, and can blend in. It’s unlikely that many of the officers or staff noncommissioned officers outside of your immediate chain of command know you very well, so you can get away with or more importantly, you can accomplish things that few expect. Whether you want to use this power for good (dodging working parties, avoiding duty — err…I mean evil), or to suddenly pop up out of nowhere in crunch time like a digipat ninja is up to you.

Second, and most importantly you’re new and unlike some of those above you, you have a clean slate.

1. Being a fly on the wall isn’t the same as being a passive observer. The saying among junior enlisted is rightfully, “Fly below the radar,” but it’s not just for dodging shitty work details. You’re perfectly positioned to see what’s going on within your unit and your command structure. You’re going to be overlooked, maybe even ignored, so be curious, watch, and listen — figure out how things are done without having to ask or skyline yourself.

2. Take the initiative, but don’t stick your neck out too readily. It sounds good to say things like, “Better to ask for forgiveness, than permission,” but usually the ones saying that have been around for a while and have the clout or service record to back up the risks they take.

3. Crawl, walk, run. If you’re a worker, then excel at your work — don’t be one of those guys who keeps adding different responsibilities to his/her plate, but can’t do any one of them particularly well. Be shit hot at your job, and once you excel at that, then pick up new things.

4. Maintain your sense of self-pride. Be a team player without becoming someone's coffee bitch.

5. Make yourself indispensable, whether that’s by excelling at a specific job or task, being the go-to person on a specific problem, weapons system, or just being the person who knows all the right people. Whatever it is, life will be easier if others see you as an asset, and not an ass.

6. Earn your keep before you start taking liberties or chances. The points you earn with your squadmates and leaders by doing a good job, being a team player, or being reliable during crunch time, that’s your currency. You don’t get away with showing up to unit PT hungover, or still drunk, if you’re a dirtbag. You’ve got to earn that right.

7. Barracks life sucks, but we all have to deal with it. Try to make the best of it without breaking the bank. My buddies and I stole a couch from an abandoned building next to the barracks and lugged it up the stairs to our room, which made the place a bit more homey and gave us a few good stories.

8. Identify mentors and seek them out, they won’t come to you. That salt dog corporal or petty officer who’s been there, done it all, and can speak with authority to those who outrank him or her, that’s the one you want to emulate, so make the effort to watch, listen, and learn from that person.

9. Identify shitty leaders and watch them closely to make sure you never end up like that.

10. Take the bullshit in stride, it’s only fleeting.

11. Don’t be a brown noser. Period. Nobody really likes that guy, nobody respects that guy. Not his peers, and not the supervisor he follows around. There’s a difference between being liked, and being respected.

12. Understand the difference between experience and rank. Give the proper greeting of the day, but respect another’s billet and experience first and foremost (and for those in the Marine Corps, “Senior Lance Corporal” is a real thing, especially if you’re in, or are ever around the infantry.)

13. Remember why you enlisted. It was important enough at the time to put your civilian life on hold, possibly forever, so don’t lose sight of it.

14. Don’t get too comfortable. When you establish a good rapport with your NCOs and leadership, you should feel confident about sharing your opinions and views when prompted, but don’t get so comfortable you forget about their rank, because they won’t hesitate to remind you.

15. Sometimes your life will fucking suck. Deal with it. Nobody’s going to throw you a pity party, because they’ve all been there. However, it does get better and shared misery can create a lasting bond between those who serve together.

16. If you only plan to be in for one enlistment, accept the fact that some lifers just won’t understand you. They’re going to assume you’re just in it for the paycheck, or the benefits. Don’t sweat it, you’ll be out in a few years, and they’ll still be there.

17. Life will be easier if you master the little things: get a haircut, keep your uniform clean, you know, the daily bullshit we all hate. As long as it doesn’t conflict with your morals, play by the rules. And if shaving daily or wearing a clean uniform is at odds with your moral values, then you’re in the wrong profession, bro.

18. Do not “volunteer” to get a humvee or MRAP license if you like your job, and you're nearing deployment, because that’ll be all you end up doing. If you hate your MOS, then go for it.

19. Try not to set too many precedents. Don’t volunteer your personal time too readily, otherwise you may find yourself “volunteering” for things every weekend.

20. Finally, don’t smoke weed, snort cocaine, or in general, be an idiot with drugs. You’ve sacrificed a lot, and in the case of some, you’ve risked your neck overseas. Don’t risk losing your veterans benefits because you wanted to get stoned and watch “The Hobbit.” That’s what post-military life is for.

There’s certainly more that can be done to excel and rise through the ranks, but this about how to make the most of those first few years. The key is to maintain perspective, both of your situation and the mission. You’re in the military for a reason, and you have a job to do, that comes first. After mission accomplishment, you can worry about how to make your life a bit better, but never before.