When it comes to advice on camping, hiking, and the outdoors, the internet seems to be fairly divided into two... 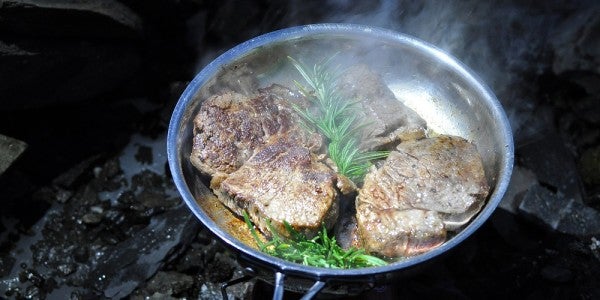 When it comes to advice on camping, hiking, and the outdoors, the internet seems to be fairly divided into two distinct camps: There’s the hardcore survivalists who want to spend a weekend trip fending off bears with a spear they made in the woods. Then there’s the equally die-hard glampers. By glamping — which is a stupid millennial word that means glamorous or luxury camping — I’m not referring to folks who drive to a campsite, blow up an air mattress, and sleep in a tent. I mean the ones who pack solar chargers for their iPads and espresso machines, and have a tent for their dog.

However, not everyone falls into those two groups. Take the average guy or gal who just wants to get away from the daily grind, spend some time outside, and drink entirely too much while eating meat with every meal. You know, your typical red-blooded Americans.

Here are some simple tips geared toward those who think the hallmark of a good camping trip is a full belly, smelling like a campfire, and returning home with a hangover that takes two days to go away.

There are other options if you don’t have a camp stove.

If you forgot to pack your stove, or are too cheap to buy one, just cook your food over the fire. Duh. However, if you don’t want to, or can’t because you’re at one of those fascist campsites in California where everyone loses their mind about stray embers year round, there’s hope.

You can make a “penny stove” out of two soda cans, some fuel, and a penny, hence the name. First, you cut the the bottom third off each can, discarding the rest. Using a thumbtack, poke five holes around the center in the shape of a “+” symbol on one of the cans. Then punch several holes along the rim so it resembles a propane burner. Take the bottom half of the other can and crimp the edges with pliers, then press the two firmly together until they form a seal. Fill the can with fuel, slowly. Once it’s full, place a penny over the five holes in center, and add more fuel to the top, until the penny is covered, light it and let it burn down. As the can heats up and fuel burns off the top, fire will burn through the smaller holes on the side. Now you have a small, but functioning stove that literally costs a penny.

Alternatively, you can take any leftover or unused metal tent stakes, clear a patch of dirt, then place the stakes in the ground with the L-shape facing inward. They should be close enough together that you can place a can of soup, small cooking pan, or tin foil bowl on top. Start a small fire with twigs and brush underneath, and now you’ve got a working grill, of sorts.

Most people who camp throughout the year have a dedicated box for their supplies. However, it doesn’t take long before it’s a disorganized mess of random zip ties, broken plastic plates, and so full of crap you can’t close the lid. Add to it that you need to pack a cooler with food, and fit everything in your car or truck; space becomes an issue very quickly.

One way to make some extra room in your cooler is to store eggs in a water bottle. This also keeps them from breaking or the carton from becoming soggy as the ice melts. Before you leave for your trip, take the eggs out of the carton, whisk them until they’re yellow, then pour that liquid gold into an empty plastic bottle.

To keep your camping box somewhat organized, put your matches into a small Tupperware container and glue sandpaper to the top to strike the matches on. This keeps them from shaking loose and spares you the trouble of rooting through a box in the dark for a damn match. For cutlery, cut PVC piping to store knives, so they don’t puncture the rest of your supplies.

The liberal application of tinfoil is key.

With a bit of foil, and some prep work at home, you can eat red meat with every meal.

For starters, make meatloaf wrapped in onion. Take a pound of ground beef, season it, then divide it up evenly into six to eight balls. Then wrap each one in a layer of onion, wrap them individually in tin foil, then place them over a grill, in the fire, or on top of the coals.

Use this same method to make quesadillas, philly cheese steak sandwiches, sausage and hashbrowns, and pretty much anything else that’s mostly meat, cheese, and bread.

If you see camping as an excuse to day drink, you’re doing it right.

Unfortunately, some campsites can be pretty uptight about open containers. Though a stern talking to from some park ranger is a small price to pay for a nice outdoor buzz, if you want to avoid the hassle, here’s a tip.

Make some minor modifications to an empty soda can and use it like an incognito beer koozie. All you need is an empty can, a pair of scissors and a can opener. Just remove the top and bottom of the soda can with the opener, and cut along the side with scissors.