Can you blame him? 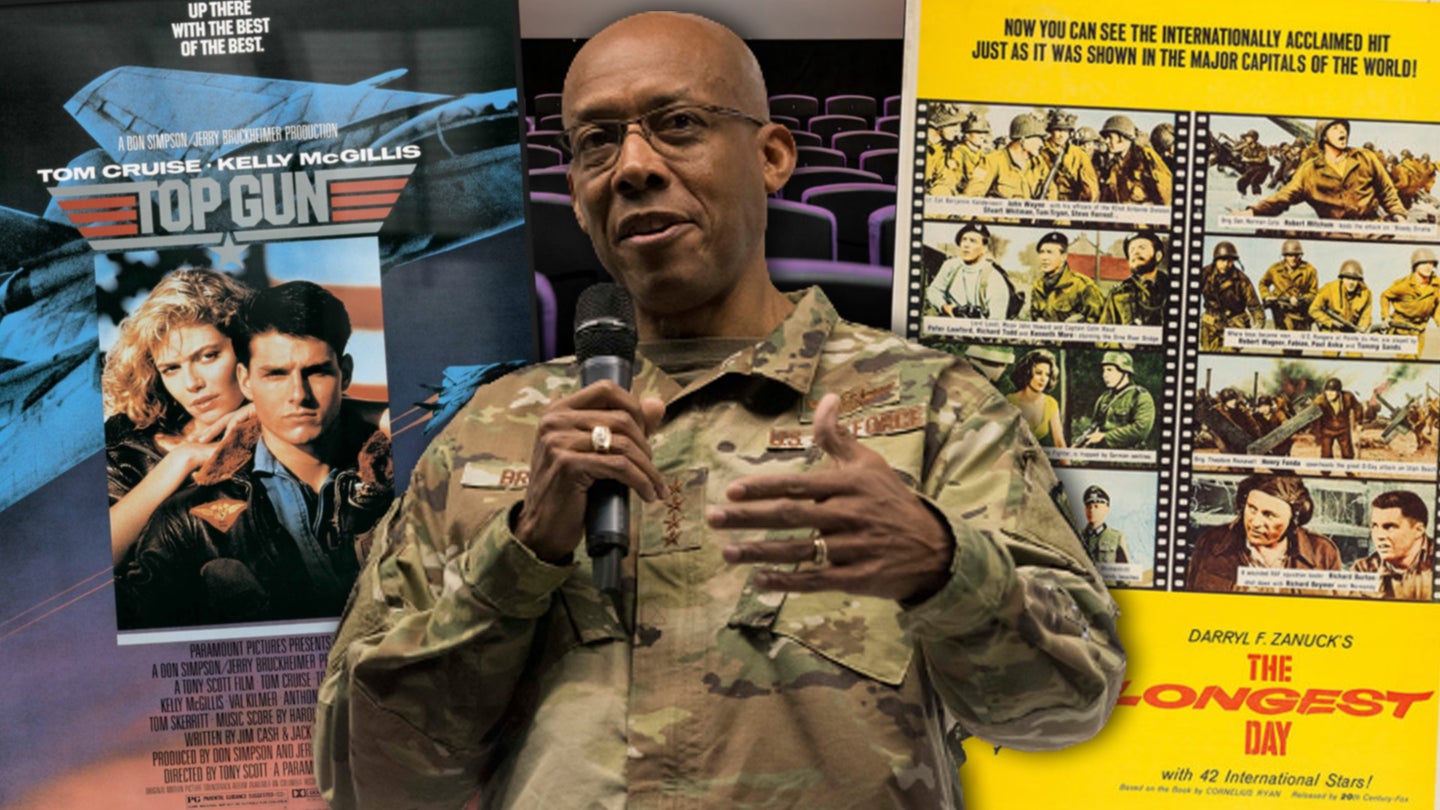 The top officer in the Air Force has two favorite military movies, and neither of them are about the Air Force. That’s right, Gen. Charles “CQ” Brown Jr., who is nearing his first anniversary as Air Force chief of staff, said in an interview on Friday that his two favorite military movies are “The Longest Day,” a 1962 film about the Army’s D-Day invasion of Normandy; and “Top Gun,” the 1986 classic about Navy fighter pilots, not Air Force fighter pilots like Brown.

The reason? Well, “The Longest Day” was “one of the ones that I grew up on,” Brown said at a National Press Club event. And “Top Gun,” despite being about Navy aviators, came out right when Brown was finishing undergraduate pilot training in April 1986.

“It was probably the most realistic flying movie that I’d seen, and it just left a mark on me,” the general said. “I was out of pilot training, and I was already going to fighters, so it was one of those where you kind of go ‘that’s pretty realistic.’”

Some moviegoers might push back on the notion that “Top Gun” is a realistic depiction of military aviation. In fact, one former Navy aviator wrote in 2020 that the movie “has a bunch of cringe-worthy technical errors that cause it to be as much cartoon as tribute.” But in Brown’s defense, if a movie came out depicting journalists as cool, volleyball-playing studs the year I graduated journalism school, well then I’d say it was pretty realistic too.

A lifelong fan of the comic book super hero Spiderman, Brown added that “all the Spiderman movies are on my list as well.”

You might be surprised to hear that neither of the top Air Force leader’s top military movies involve his own branch, but it’s hard to blame him. There simply are not many blockbuster Air Force movies out there, especially for a guy like Brown who, by his own admission, doesn’t “have a lot of time to watch movies,” he said on Friday.

Granted, there are a ton of World War II movies about the days where the Air Force was still part of the Army. There’s “Twelve O’Clock High,” the Gregory Peck film about beleaguered bomber crews flying over war-torn Europe; “Command Decision,” again about the bombing of Europe; and several movies about the Tuskegee Airmen, the Black fighter and bomber pilots who flew over Europe.

More recently, there’s “Dr. Strangelove,” much of which takes place aboard a B-52 Stratofortress; “Iron Eagle”; the very unrealistic movie about stealing F-16 fighter jets; and “The Last Full Measure,” about Air Force pararescueman William H. Pitsenbarger, who posthumously received the Medal of Honor for defending a group of soldiers pinned down by enemy fire in the Vietnam War.

But unfortunately, few of these rise to the same level of fame enjoyed by other war movies like “Saving Private Ryan,” “Full Metal Jacket,” or even “Top Gun.” One thing’s for certain: it’s not for lack of stories. Like any other military branch, the Air Force has enough tales of bravery and daring to give even Maverick a run for his money. For example, Air Force Brig. Gen. Robin Olds was such a stellar fighter pilot in World War II and Vietnam that male airmen still grow out their moustaches in March every year in his honor. And don’t forget Tech Sgt. Leonard Matlovich, a Vietnam War veteran with a distinguished service record who in 1975 became the first gay service member to publicly out himself (he was kicked out of the service as a result, though the Air Force now celebrates him).

Maybe Brown himself will be the subject of such a movie. At the National Press Club interview, club president Lisa Matthews asked who Brown would like to play as himself if a film were ever made about the general, who is the first Black service chief in American history. Brown suggested the actor Anthony Mackie, who plays the new Captain America in Disney’s Marvel Cinematic Universe.

“I think I’d give him a shot,” Brown said with a smile about Mackie. The two men recently chatted together for a Disney promotional interview, where Mackie expressed his respect for the general.

“Sometimes I meet people like General Brown, and I’m like, ‘That guy’s not a human being — he’s a rock star,’ you know, and you forget they’re actual humans and you place them in a light where they’re not allowed to be humans,” Mackie said, about portraying service members. Before Captain America, Mackie played the superhero Falcon, who in the Marvel movies is a former Air Force pararescueman.

Speaking of Air Force special operations, there could be a great movie coming down the pike about Air Force combat controllers, the airmen whose job is to bring in air support and coordinate air traffic in support of other special operations troops such as Navy SEALs, Army Special Forces, and British and Australian SAS. The unnamed movie is about Tech Sgt. John Chapman, a CCT who was killed by Al Qaeda fighters in Afghanistan while protecting his teammates in 2002. The movie stars Jake Gyllenhaal as Chapman, and is based on the book Alone at Dawn, which was co-written by a fellow CCT named Dan Schilling.

It’s still not clear when that movie will be released, but wouldn’t that be a nice birthday present for the Air Force’s 75th birthday in 2022? A movie that people actually remember.