Can Shia LeBeouf Convey The Trauma Of Combat?

In more ways than one, actor Shia LaBeouf is the perfect actor to embody a young Marine struggling with the... 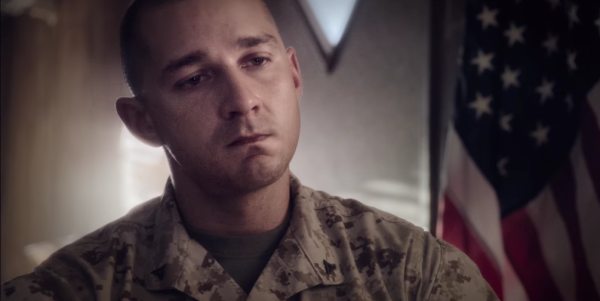 In more ways than one, actor Shia LaBeouf is the perfect actor to embody a young Marine struggling with the effects of combat as he does in new movie, “Man Down,” directed by Dito Montiel.

As the son of a Vietnam veteran who suffered from flashbacks, LaBeouf knows the personal struggle many Americans face when they return home from war. He knows the battle sometimes never ends.

Screenshot from “Man Down” trailer.

This wasn’t the first time LaBeouf took a beating for a military role. In preparation for the film, “Fury,” LaBeouf ripped out his own tooth and repeatedly cut own face with a knife to make his war wounds more lifelike. He also went months without bathing and sought training with the National Guard.

“I’m honored to stand in front of you this evening. We put a lot of love into this movie,” LaBeouf told an audience of active-duty and military veterans this past November at an advanced showing of “Man Down” in New York City.

Unlike most movies meant to entertain or provide an escape, “Man Down” shows the American citizenry the psychological toll war can have on those we send to war.

The hyperbolic realism presented in “Man Down” by LaBeouf’s character, Lance Cpl. Gabriel Drummer, can be compared that of the 1992 film, “Scent of a Woman,” in which an unlikeable and erratic Frank Slade, played brilliantly by Al Pacino, struggles with the inner demons of his military past.

“I have seen boys like these, younger than these, their arms torn out, their legs ripped off! But there is nothing like the sight of an amputated spirit. There is no prosthetic for that,” Pacino yells.

It is in a similar condition that we meet Drummer as he treads across desolate streets and past decaying buildings with blood-red graffiti that screams, “America, we have a problem!”

“Man Down” jumps frequently from this apocalyptic hellscape to present day where Drummer undergoes the hardships of Marine infantry training, forming relationships through adversity and navigating the complex waters of a young marriage faced with their first deployment — not to mention having a child naïve to the problems of society, but mature enough to notice the underlying strife in his own home.

While those whom have served in the military could easily pick apart the inaccuracies of infantry training — warfare insignia badges worn by actor Gary Oldman or firefights in Afghanistan — these very minor discrepancies are quickly forgiven amid the plethora of military life the filmmakers got right and the compelling storytelling used to portray the way post-traumatic stress disorder.

The scenes between LaBeouf and his wife, played by Kate Mara from “House of Cards,” and his son (newcomer Charlie Shotwell) are genuine and heartbreaking as Mara and Shotwell both give imitable performances of a story that will seem all too familiar service members, in which broken marriages and dysfunctional homes — or worse — are commonplace.

While the filmmakers of “Man Down” agree that their story is not representative of all service members and veterans and shouldn’t be taken as such, the film is aimed at demonstrating the very real mental health issues — PTSD, major depression, traumatic brain injury — that one in five Iraq and Afghanistan veterans endured when they returned home and the impact of those struggles.

While the film has received a lot of criticism, the one reason “Man Down” is worth seeing is simply the Oscar-worthy performance from LaBeouf that seems to be cut from the same cloth as Robert De Niro’s “The Deer Hunter” as he fully embodies a combat Marine: loyal to both family and Corps; yet, riddled with survivor’s guilt that he hopelessly tries to bottle down and suppress.

Film critic Peter Debruge, writing in Variety, compared LaBeouf’s performance to Marlon Brando and Montgomery Clift; however, he dinged the film for being an “awful mess” and a “appallingly manipulative psychological thriller, which scolds audiences for not caring enough about our veterans.”

Yet, what Debruge misses about “Man Down” is that the human story and the unique passion of Adam Simon, who crafted the screenplay eight years prior while being homeless, divorced, and bankrupt on the streets of Los Angeles, is that the film is meant to be raw and disjointed — there is no happy ending — because it’s society that’s reflected, and we are all responsible.

“We are what we consume,” Simon told Task & Purpose by phone. “We used to have these movies like ‘Taxi Driver,’ ‘Deer Hunter,’ and ‘Dog Day Afternoon’ that held a mirror to our society and that’s what ‘Man Down’ is doing.”

Simon added, “Our movie is here to punch you in the nuts and wake you up and say this is happening and if it happens to one person, it’s too many.”

“Man Down” is now playing in theaters.