Here's the story behind the most GWOT Christmas tree ever. 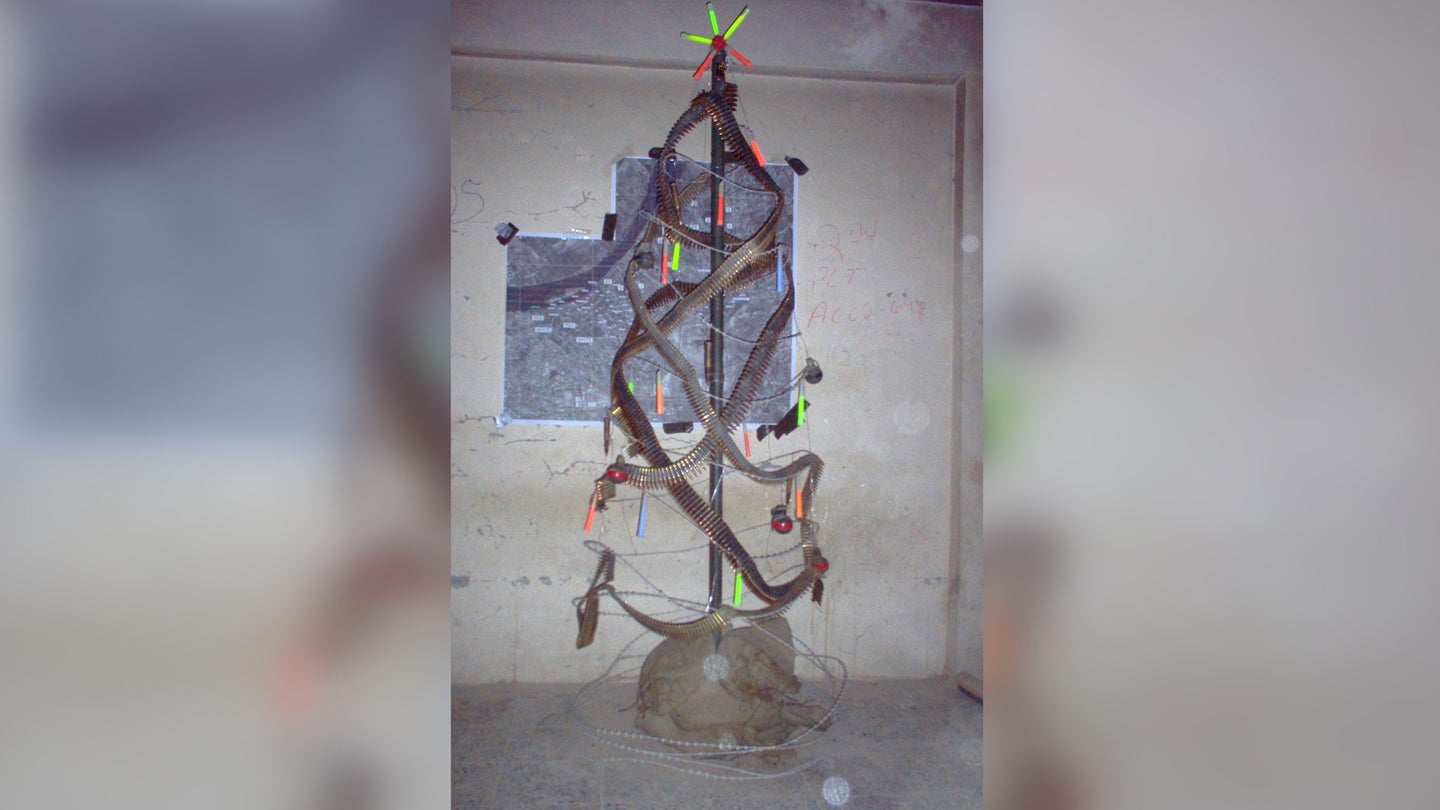 For generations, American service members have spent Christmas away from home in times of war. Each conflict has its own unique story, from Gen. General Washington’s morale-boosting attack against Hessian mercenaries immortalized by the famed painting of him crossing the Delaware River, to the relatively unknown Christmas story of a German family sheltering both German and American soldiers in the Huertgen forest during World War II. Indeed, the past 20 years during the Global War on Terror have provided no shortage of personal accounts of American troops celebrating Christmas while deployed to Iraq and Afghanistan.

While I spent Christmas in both countries during America’s conflict, the one that I remember most was in Iraq in 2005. As time moves forward, it seems the general flow of life starts to bury the past. For many veterans, we carry memories of a place none will forget for decades to come — and for me, Ramadi, Iraq is such a place.

In 2005, Ramadi was a city of nearly half a million people and was considered the heart of the insurgency in Iraq. American soldiers and Marines were locked in a contentious battle with al Qaeda militants and local Sunni insurgents that turned into some of the deadliest sustained combat of the war. Situated on the eastern flank of the city is Camp Corregidor, a relatively small battalion-sized outpost that previously was a university of Anbar Province. I first arrived there in June of 2005. This would be my home for the next twelve months.

I was a member of a sniper team in the Pennsylvania Army National Guard that was attached to an active duty unit, 2/69 Armor of the 3rd Infantry Division. Coincidentally, upon arrival, I was greeted by a guy I hadn’t seen since high school. My unit was replacing him but seeing a familiar face was a nice surprise, an abbreviated high school reunion of sorts. He gave me a couple of maps of the city, milk crates of ammo, grenades, and claymores, commenting that we were lucky we had trucks as all of theirs had been blown up by IEDs, so they mostly did foot patrols. His parting words to me: “you’re in the fight now, stay small and never stop moving.” As he left, I wondered to myself, what the hell are we walking into?

Summer and fall were a blur. It was hot, dusty, and violent. As a sniper in an urban conflict, most of my movement was at night and much of the city I saw was through the green phosphorus glow of my night vision goggles. The insurgency kept us busy, and our primary task was the interdiction of IED emplacement teams. About half a mile from Camp Corregidor was a concrete multistoried structure known as “OP Hotel,” a prime target for the local insurgency. In August, the boys of Able Company, 2/69 Armor, 3rd Infantry Division experienced a spectacular attack that fortunately only killed the suicide bomber. I felt the blast from over half a mile away while laying on my bunk in a concrete building.

One night in early July, I saw OP Hotel for the first time as we transitioned from Corregidor to our hide site. If there were troops in contact, it always seemed like it was OP Hotel getting hit or a unit in the vicinity of the Hotel engaged while on patrol. The hotel is an ominous-looking structure at night, like some outpost in Mordor. As our small element walked by the Hotel, I thought we would either run into the insurgency that night or the Hotel might mistake us for the enemy. It’s probably why I signaled with my IR floodlight on my PVS-14s as we moved by despite knowing prior coordination was made before the mission. It wasn’t long before our leadership had us staging a team to augment the platoon at the Hotel. We occupied a small structure on top of the Hotel that we called the “crow’s nest”.

The crow’s nest gave us a commanding view of the city, especially to the north and to the west. Often, it gave us some blazing hot sunsets as the sun disappeared on the western horizon; sometimes it gave us surreal views of the Marines defending the government center as we calmly ate dinner listening to Johnny Cash’s “Ring of Fire”. As fall faded to winter, there was a dramatic decrease in insurgent activity. Winter brought cold nights and even colder mornings. Being close to the Euphrates River gave the air an extra chill, a chill that didn’t abate until mid-morning.

As Christmas approached, the platoons we shared the Hotel with changed. Our brothers from Able Company headed home in  December after months of hard fighting. Animal Company took the reins during this transition and while seeing new and familiar faces was a welcome change, we would miss our old friends. Winter also brought overcast skies and cold rains. Strangely, Christmas decorations started to appear at the hotel. Mostly in the room where we ate our meals and in the tactical operations center (TOC). The TOC wasn’t anything noteworthy outside of sandbags, a bank of radios, and maps. It was as austere as the city in which we fought.

This changed almost overnight. It started with some simple lights and garnish but soon included what would be the most Ramadi Christmas tree an American infantryman could conjure up.

Standing at an impressive seven feet tall, this was no ordinary Frasier fir cut down at your local tree farm, as we were unsurprisingly short on conifers in this part of the world. With sandbags as the base and concertina wire providing the classic and symmetrical triangular shape of a tree that any mom would be proud of, it was clear that ingenuity and care crafted this token of Christmas. Belts of 7.62 mm ammo spiraled down from the peak to the base. Since running to Target for ornaments wasn’t an option, M67 fragmentation grenades with the appropriate red and green tape (for safety, of course) and .50 caliber armor-piercing incendiary rounds were hung with care. The piece de resistance was the five-pointed star made of chemlights that really brought the entire creation into the holiday spirit. The TOC wasn’t a place for people to gather but no doubt it was a place people would stop and admire for a moment before returning to their battle positions.

Santa never made it to the Hotel that night, but we were visited by our Brigade Commander, Iron 6, the call sign of then-Col. John Gronski. We called him Iron Balls 6 because he was well respected by our senior leadership on down to the squad level. He genuinely cared about his soldiers and often moved throughout the brigade area of operations in a four-vehicle convoy, which, in Ramadi, took some audacity considering the strength of the insurgency even if enemy activity had decreased since the fall.

To this day, now-retired Maj Gen. Gronski still can recall that death metal tree. “Since 2005, I think about that tree every Christmas season,” he recently told me. “And when I do I am filled with deep emotions due to the admiration and pride I have for the soldiers who fought a very tough fight in the most dangerous place on earth against a very violent and relentless enemy.”

Christmas came and went that year with little excitement. At the Hotel, we were a bunch of soldiers like all the soldiers before us, far from home but no doubt with home on our minds. Despite the cold and quiet, laughter could be heard as soldiers shared stories, drinking their Rip Its and eating food while pulling security. In the Crow’s Nest, we huddled around the glow of our electric heater not unlike our predecessors in the Ardennes during a lull in the Battle of the Bulge decades earlier. Spring would eventually come and with it, renewed fighting for control of the city but on Christmas, we enjoyed a small measure of peace.

Joseph Bennett served as an Army infantryman and as an aviator flying the Apache helicopter during deployments to Iraq and Afghanistan.

Joseph Bennett served as an Army infantryman and as an aviator flying the Apache helicopter during deployments to Iraq and Afghanistan. He is currently a graduate student at American University studying International Relations. An avid outdoorsman, he’s passionate about archery and backpacking.