Yes, the bend-and-reach was still a part of it. 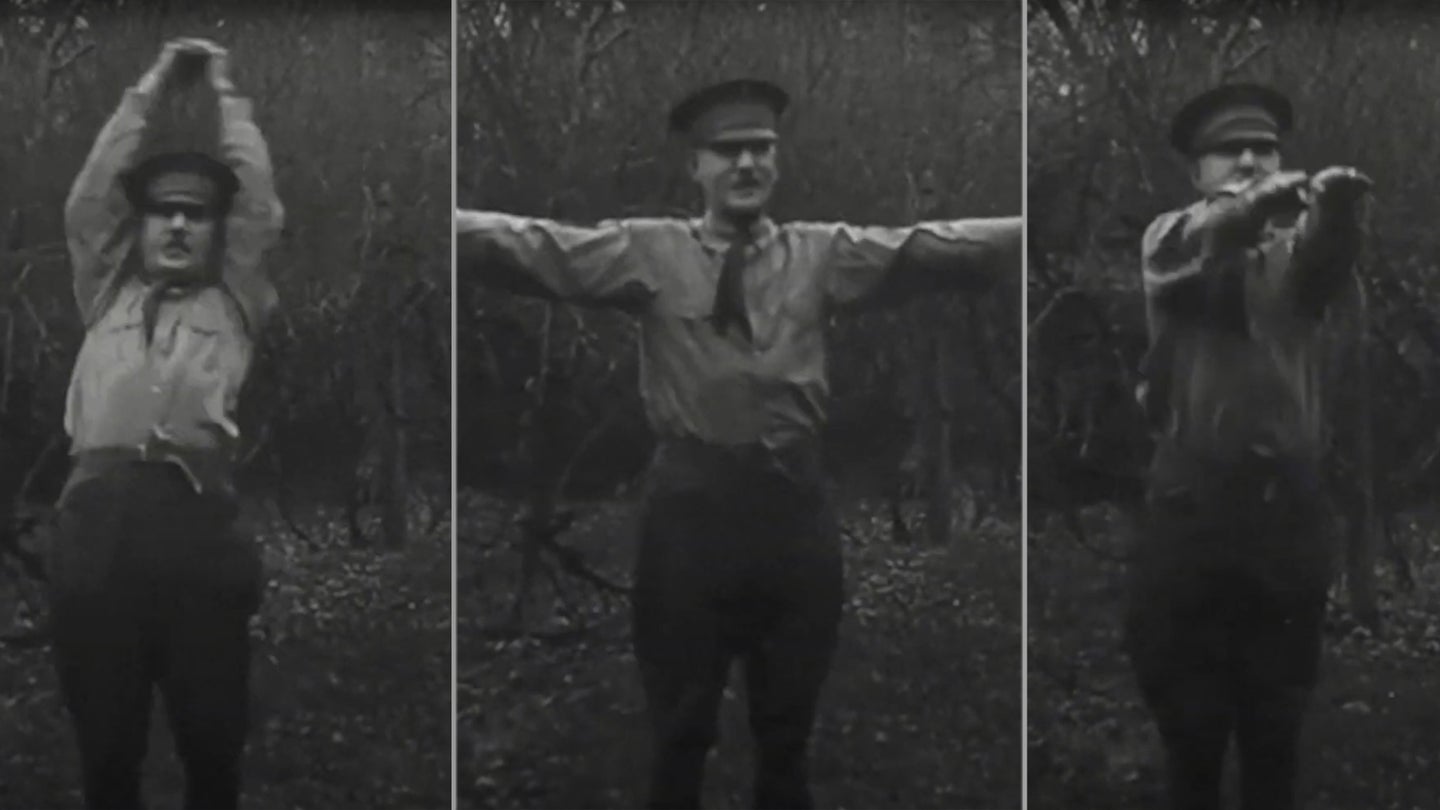 Screenshots of the "daily dozen" via footage from the National Archives.
SHARE

Ah, morning PT. There’s nothing quite like showing up at 6:30 a.m. to stand in formation and then spending the next hour or so engaging in some calisthenics, weight training, or perhaps your “daily dozen.”

The “daily dozen,” what is that, you may ask. Well, as Outing magazine’s fall, 1918 issue says, it’s a series of exercises developed by Walter Camp to give military recruits “a running jump start for the serious work day.”

Here’s a video of Camp demonstrating some of the exercises for the 83rd Infantry Division from either 1917 or 1918, it’s unclear which. And if you ever thought that wearing a button-down shirt and tie would prevent you  from training for the day’s activities, you’d be wrong.

As much as PT is a fixture of modern military life, it both has and hasn’t always been that way.

An analysis of the history of military physical training from the Army War College quotes a Roman legionnaire, saying, “every soldier is every day exercised… with great diligence, as if it were in time of war, which is the reason why they bear the fatigue of battles so easily… nor would he be mistaken that should call those their exercises unbloody battles, and their battles bloody exercises.”

Train as you fight, circa the first century, A.D. But, still, a soldier’s fitness came primarily from the fact that he was put to work all day.

Moving into the 19th century, militaries began to embrace “gymnastics,” which can best be thought of as general physical fitness. Within nations that had a national draft, such as France or Germany, there was at least an awareness that young men had to be in shape to serve.

In Germany, Gen. Gerhard von Scharnhorst encouraged all schools to provide physical training like fencing, swimming and track to students. One of his inspirations, a gymnasium owner named Frederick Jahn who was a bit like a Napoleonic-era version of a fitness influencer, led an infantry battalion that was renowned for its endurance and discipline.

This didn’t go unnoticed, and the fitness craze continued to spread, both in militaries and the civilian world.

In the U.S. there wasn’t even an organized system of military training until the 1830s, and even then it consisted mainly of digging ditches and building fortifications. But the concept of physical training for soldiers really began to take root in the mid-19th century. First with the officers training at West Point, and then when simply looking at the carnage of Civil War battlefields and realizing that a modern soldier may need to do more than march in a formation and fire a weapon.

This was also part of a general cultural trend of physical fitness that carried on through the late 19th century. There may not have been an L.A. Fitness gym on every corner, but something like “muscular Christianity” was definitely en vogue.

That same commitment to exercise also began to appear in the U.S. military.

In 1892, a man named Herman Koehler, who was working at West Point, published a “Manual of Calisthenics,” one of the first official Army publications codifying physical training.

That brings us back to World War I and Walter Camp.

Camp was born to a preppy New England family in 1859 and attended Yale. He was, in short, a rich kid. But while colleges were almost exclusively the domain of the rich in the 19th century, they were also hotbeds of sports. And Camp was not only fully committed to that 19th century fitness craze, he was also one of the founders of American football.

With America’s entry into World War I in 1917, there were literally hundreds of thousands of men either enlisting or being drafted. Prior to the war, there had been no centralized training system for military recruits. The various branches were small enough that you just signed up and got your training with your unit.

With so many men now under arms, though, the military wanted a system to ensure they met some basic level of physical fitness.

Camp developed the exercises and helped institute them as a standard part of military training. They’re mostly calisthenics and stretching, kind of like an early version of those preparation drills everyone goes through in basic training. The “daily dozen” starts with “The Grind,” which sounds menacing but is really just holding out your arms and rotating them. Then there’s “The Weave,” which is basically the bend-and-reach, otherwise known as touching your toes. There’s “The Crouch,” which is just squatting on the ground. The “Crawl” is kind of like the overhead arm pull – touch your right arm to your left shoulder, and vice versa. Still, it’s early in the morning. And if you’re really not in the mood to move your limbs, there’s the “Roll,” which is, of course, just twisting your neck around. Some of this might seem like what you do just waking up in the morning, but it will apparently fill you with all the vim and vigor you need.

In short, you stretch out, wave your arms, and get the blood flowing. For 1918 this was pretty good stuff. Especially if you were on a diet of tobacco, canned beef, and coffee.

Now, is it the Army Combat Fitness Test? No, but the way soldiers continue to train will certainly keep evolving. Just consider yourself unlucky that your PT doesn’t consist of trying to touch your toes.