This is easily the greatest military tattoo we have ever seen. 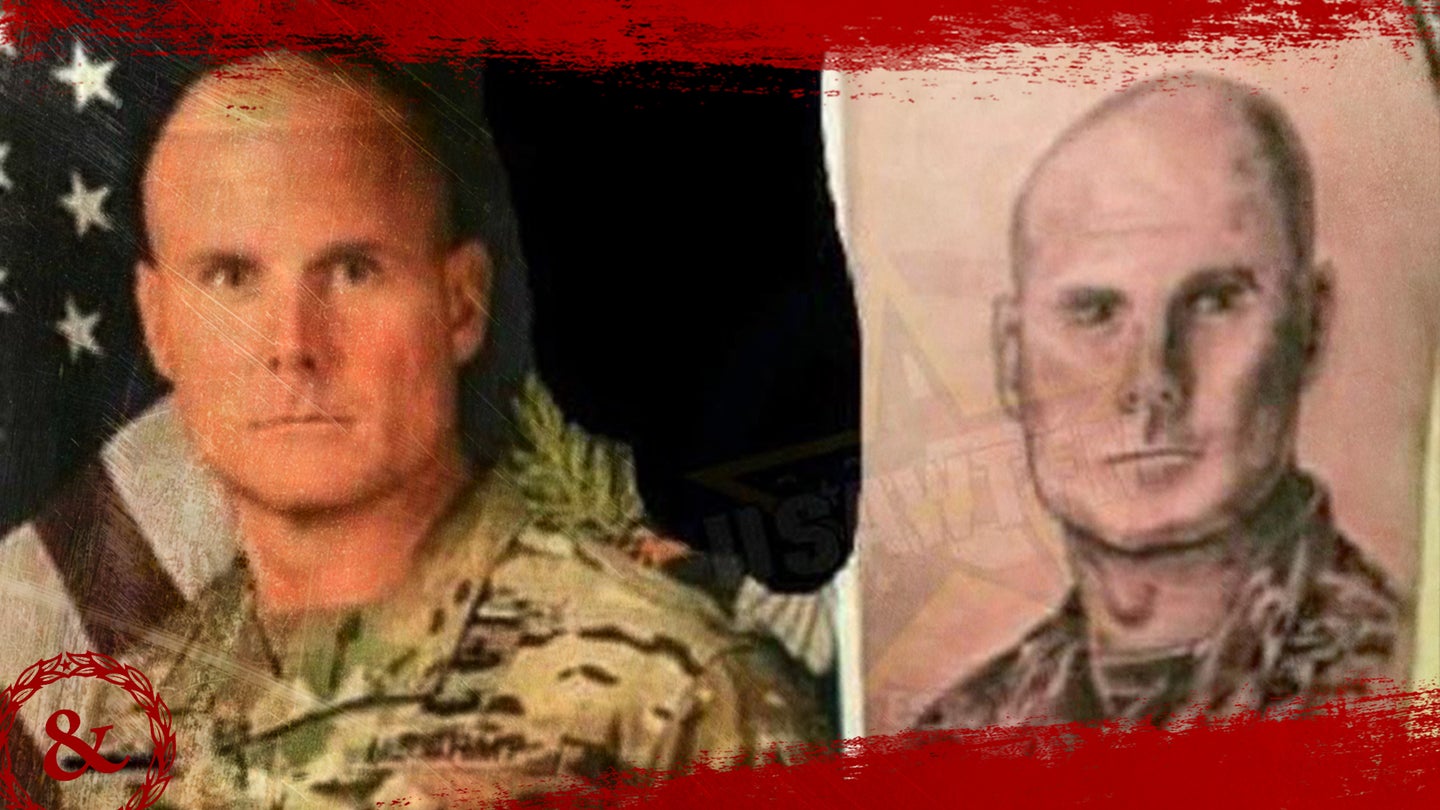 Tattoos are as ubiquitous in the military as high fade haircuts, high-stress jobs, and even higher annual percentage rates for brand new muscle cars. Given the prevalence of ink among service members, it’s no surprise that there are a few eye-brow-raising tats out there on sleeves, backs, chests, or the left-thigh of an Army private first class, such as this one:

This modern art masterpiece was brought to our attention by Capt. Daniel Mathews, an Army public affairs officer who shared the photo on Twitter in response to a previous Task & Purpose story, in which we asked readers to send us photos of their “best worst” military tattoos.

And yes, that is a tattoo of a command sergeant major that a soldier willingly paid real money to have put on his body. The only thing more impressive than the tattoo is the story behind it, and it’s one we now know and will share with you. Here’s how it happened.

Like so many great stories in the military that are destined to be told and retold at the smoke pit until the end of time, it all started with a friendly wager, explained Mathews, who’s assigned to the 2nd Stryker Brigade Combat Team, 2nd Infantry Division, based out of Joint Base Lewis-McChord in Washington.

“It was a soldier, a PFC in our unit, who made a bet with another soldier” on the Kamaru Usman vs. Jorge Masvidal UFC fight on April 24, Mathews said. The soldier, a private first class with the 2nd Battalion, 1st Infantry Regiment, “didn’t want to have his first name out there,” Mathews said, “so I figured I’d go with rank.”

Each soldier picked a fighter and agreed to a very specific set of terms: The loser had to get a tattoo of their unit’s sergeant major, in this case: A full profile of Command Sgt. Maj. Stephen Siglock.

Now, I don’t know about you, but those feel like pretty high stakes to me. Almost without exception, a battalion sergeant major is the “heavy” in the unit — a role that some take to with a bit too much enthusiasm. Just consider this: If you were ever to face nonjudicial punishment, then your sergeant major would be standing right there in the room as it was meted out. Do you really want to go into that with his or her face etched onto your body? Kudos to these soldiers for having the guts to take that bet on.

Unfortunately (or fortunately depending on how you look at it), the private first class picked Masvidal and the other soldier put his tattoo money on Usman.

“He lost the bet and the other guy was like ‘you don’t really have to do that, you know, we’re just kind of goofing around,’ said Mathews, adding that the soldier wasn’t backing down. “He’s like ‘no, I’m a man of my word. I’m going to get the tattoo.’”

So, shortly after the match in late April he went out, got a professional tattoo, and came back to the unit with it. Then, all too predictably, a photo of his fresh new ink began circulating online after it was posted on Facebook by U.S. Army W.T.F! Moments, a popular military and veterans social media page.

“I knew at some point someone was putting that on U.S. Army W.T.F! Moments,” Mathews said. “I almost wanted to do that myself, personally, but was like ‘no, no, no.'”

However, as soon as the tat started making the rounds on the internet, those in the unit — and probably at the battalion headquarters — started asking questions.

“At first when the photo went around, everyone was like ‘who was this? Who was this?’” Mathews said. “Obviously, we thought ‘hey, first PT formation, we’re going to find out, because that’s a hard thing to hide.'”

As for Siglock, the sergeant major whose face is permanently etched upon one of his soldier’s legs, he’s not only aware of it — how could he not be by this point? — he’s actually a fan.

“The command sergeant major feels the same actually,” Mathews said. “Thinks it’s pretty funny. He laughed about it when he saw it. [He] thinks it’s pretty well done as well — maybe the nose is a little off.”

While Siglock didn’t speak directly with Task & Purpose about the tattoo, he told Mathews that “It has actually been a really positive experience for me. I have had a lot of people reach out to me and have reconnected with a lot of old friends.”

As for the tattooed soldier, he “finds it very funny and he takes pride in it, like any other unit tattoo. He thinks it’s a well-done portrait,” Mathews said. “I think ultimately it shows soldiers having a good time and having pride in their unit and the leadership that they work for.”