The Next Great Military Techno Thriller Has Finally Arrived

The military techno thriller novel has had a tough time in the post-9/11 world; the Global War on Terror doesn’t... 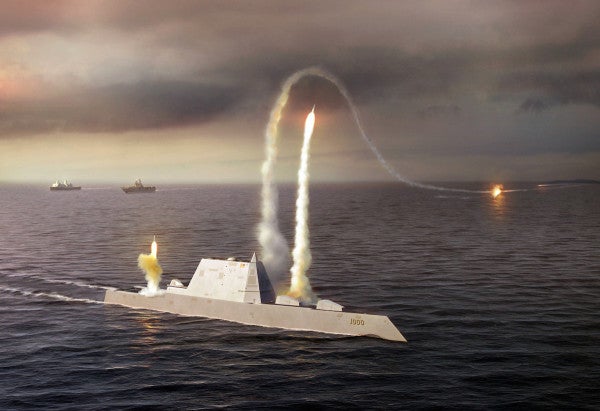 The military techno thriller novel has had a tough time in the post-9/11 world; the Global War on Terror doesn’t present the same opportunities for fictional explorations of bleeding edge technology or speculation about tactics and strategy that the Cold War did for authors like Tom Clancy or Larry Bond. But as the U.S. military hurtles towards an uncertain post-Afghanistan pivot to the Pacific and tensions rise in Eastern Europe, the scene is set for a techno-thriller comeback. “Ghost Fleet: A Novel of the Next World War,” a upcoming novel from Peter W. Singer and August Cole and published by Eamon Dolan Books, shows why that comeback is a good thing.

The back cover of “Ghost Fleet” compares the book to Clancy’s debut novel, “The Hunt For Red October,” but Clancy’s 1986 follow-up “Red Storm Rising” is the more apt comparison. “Red Storm Rising” was an exploration of a theoretical shooting war between NATO and the Warsaw Pact, and how each side’s weapon systems, doctrine, and personnel would perform. The book was as much an analysis and critique of the weapons and tactics of the day as it was a character-driven narrative. “Ghost Fleet” does the same, but looks past contemporary war to more futuristic battlefields. That battlefield is the Pacific and the future adversary is an aggressive China, ruled not by the communist party, but a hybrid between a capitalist technocracy and a military junta called the Directorate.

“Ghost Fleet” reveals its “Red Storm Rising” influences in its narrative as well; the novel features a sprawling cast of characters that create multiple viewpoints on both sides of the conflict. The inclusion of many non-military characters illuminates what impact a major 21st century conventional war would have on American society. It’s here where “Ghost Fleet” diverges from its Clancy roots and becomes more of a pointed critique of the current vision for America’s future on the battlefield. Through their fictional war, Singer and Cole aim to evaluate every aspect of America’s Pacific battleplan, its preparations against cyber attacks, and other future threats.

Almost every technology present in the book is currently receiving some sort of funding from the United States, and “Ghost Fleet” doesn’t hold back any damnations about America’s weapons programs; America is not prepared for Chinese cyber capabilities, lags behind in the development of autonomous systems, and the Littoral Combat Ship program is ultimately not seen as effective. But at least the LCSs got some shots off in this faux-World War III; anyone who’s a F-35 fan will be unhappy to see America’s most expensive aircraft program reduced to a non-factor.

Beyond peering into the future of military technology and strategy, Singer and Cole look to the everyday technology of the near future. Virtual and augmented reality, smart wearables, and the proliferation of chemical performance stimulants all help build the world of “Ghost Fleet” without getting bogged down in unnecessary background detail. The authors also deftly avoid any exact references to dates; letting the reader judge how near or far the book’s events really are.

The broad cast of characters lets “Ghost Fleet” be more varied in its perspective than “Red Storm Rising,” allowing it to tackle some the interactions of the between American civil and military society. What does a military derived from the post-Millennium generation look like? What is the military generation gap like when America’s older veterans are those who fought in Desert Storm? What is the role of American corporate power when America is in a full conventional war? Are there capabilities that private military forces have that America lacks? More than just speculation, these topics drive the narrative and keep “Ghost Fleet” interesting beyond the military minutiae.

It’s difficult to imagine two better writers than Singer and Cole to tackle the ins and outs of the military technology on display in “Ghost Fleet” — both are defense analysts who have written extensively on a plethora of topics such as unmanned systems, private military contracts, war in space, and the cyber battlefield. Their pedigree in defense think tanks lends an important credence to the military details. But the fact that they elevated “Ghost Fleet” beyond just a techno-thriller equipment catalog into a quick-paced, compelling novel makes it all the easier to recommend.

“Ghost Fleet” will be available on June 30.