Watch This Vietnam Veteran React To The Riots In Baltimore

Amid severe rioting in Baltimore Monday night over the death of 25-year-old black resident Freddie Gray in police custody, one... 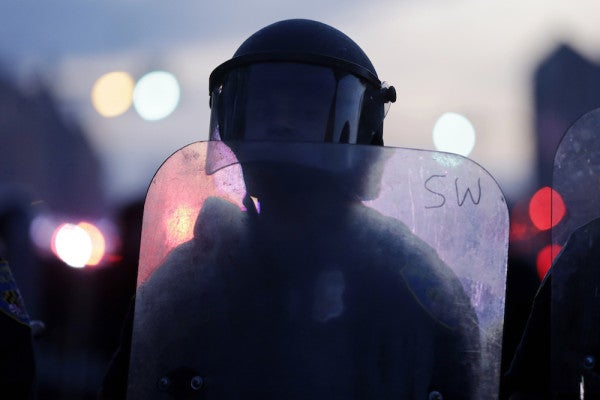 Amid severe rioting in Baltimore Monday night over the death of 25-year-old black resident Freddie Gray in police custody, one man boldly walked beyond police barriers to tell violent protesters to stop and go home. When CNN reporter Joe Johns approached the individual, standing stoically between police and rioters, he introduced himself as “just a soldier.”

For the first time since 1968, National Guard troops have been called into the city to help quell unrest, amid the injuries of 15 police officers, 200 arrests, and widespread looting and arson, reported CBS News. But this soldier’s uniform consisted of only a meager black coat with “Vietnam Veteran” stitching on the breast.

Speaking on the air, the man identified as Robert Valentine shared his thoughts about the violent response from some protesters from the perspective of a veteran who loves his country:

“I did 30 years, okay, came out a Master Sergeant. I’ve seen more than all this. I’ve been through the riots already. This right here is not relevant. They need to have their butts at home. They need to be in their home units with their families studying and doing something with their life. Not out here protesting about something that is not really about nothing. They do not respect this young man’s death. You know. Now, mama and daddy lost a child. That could be them. So I’m very pissed.”

In a city brimming with racial tension, this veteran stands out not just for standing up to violent protesters, but for how he identifies himself even amid all the chaos. “I’m an American,” Valentine told Johns. “I’m not black, white, red, yellow or nothing. I am American.”