In 2005, George W. Bush Gave The Right Response To A Gold Star Mother

On July 28, Khizr Khan stood with his wife on the stage of the Democratic National Convention and talked of... 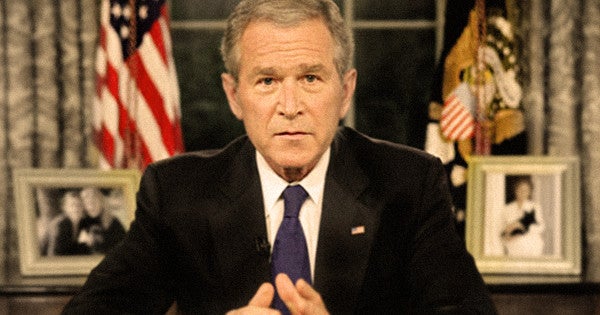 On July 28, Khizr Khan stood with his wife on the stage of the Democratic National Convention and talked of the loss of a child while rebuking Republican presidential hopeful Donald Trump for his views on immigrants.

“You have sacrificed nothing, and no one,” he said.

His son, Humayun, was a Muslim Army captain who died in combat in June 2004. He gave his life protecting fellow soldiers in Iraq, and for his valorous actions, he was posthumously awarded a Bronze Star and Purple Heart.

Twelve years later, with the backing of the Democratic Party, Khan took the opportunity to speak of his son’s patriotism, his love for America, and to reject Trump’s assertion that muslims and other minorities don’t deserve a home in the United States. He called it unconstitutional.

This was all done in response to Trump’s call for a “total and complete shutdown of Muslims entering the United States,” despite the fact that the ban is a clear violation of the U.S. Constitution.

But Trump’s response was nonetheless appalling.

“While I feel deeply for the loss of his son, Mr. Khan, who has never met me, has no right to stand in front of millions of people and claim I have never read the Constitution (which is false),” Trump said in a statement.

Something similar, however, has happened before to former President George W. Bush. Only, his response could not have been more different.

Cindy Sheehan, a Gold Star mother, lost her son Casey the same year that the Khans lost Humayun. He was an Army specialist killed in Iraq, who was also posthumously awarded the Bronze Star and a Purple Heart. Shortly after his death, Sheehan began protesting the Iraq War, and spoke out, directing her anger at then-President Bush.

In August 2005, she went to Bush's Prairie Chapel Ranch, near Crawford, Texas, to demand a meeting with him.

However, Bush accepted her comments — in fact, he even welcomed them as part of her constitutional rights. He met the media outside the ranch, and held an impromptu press conference to address the issue.

“I grieve for every death,” he said. “It breaks my heart to think about a family weeping over the loss of a loved one.”

When a reporter pressed Bush specifically about Sheehan, he replied earnestly.

“Part of my duty as the president is to meet those who have lost a loved one. I sympathise with Mrs. Sheehan,” Bush said. “She feels strongly about her position. She has every right in the world to say what she believes. This is America.”

And even though Sheehan felt that the solution was to pull out of Iraq, and Bush disagreed, he repeated that she had the right, as all Americans do, to voice their opinions about the War.

However, he added, “One opinion I’ve come away with universally is that we should everything we can to honor the fallen.”