Blast Drones Out Of The Sky With This Street-Legal Bazooka

We may earn revenue from the products available on this page and participate in affiliate programs.   Not long ago... 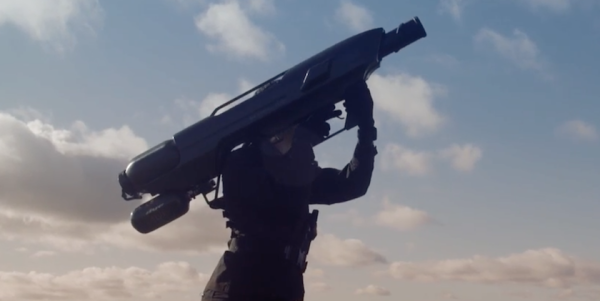 Not long ago the only things you’d see if you looked up at the sky were birds and airplanes. Maybe an occasional helicopter. Before that it was pterodactyls. Now what do you see? Drones, which have become so ubiquitous they’ve officially replaced the pigeon as the “rats of the sky.”

That’s about to change.

The Federal Aviation Administration recently announced that it was testing anti-drone technology after a study found there were 327 incidents of drones coming within 500 feet of manned aircraft between December 2013 and September 2015.

Meanwhile, in the Netherlands, police are joining forces with a company called Guard From Above that trains bald eagles to pluck these robotic rodents out of the air.

But can we really depend on the federal government or a bunch of dumb birds to protect us from the flying robot invasion? If your answer is a resounding no (as it should be) we suggest arming yourself with the SkyWall 100, a drone-neutralizing bazooka developed by the British company OpenWorks Engineering that will be available for civilian purchase later this year.

While other bazookas typically use explosive projectiles to destroy their targets, the SkyWall 100 administers justice with a softer touch. Instead of detonating, the projectile, which communicates with the bazooka via something called a SmartScope, deploys a net that grabs the drone mid-flight and then parachutes it safely back to Earth where it belongs.

What happens to the drone once it’s on the ground is up to you, but we recommend smashing it to pieces with a baseball bat and then selling the scrap metal for money, which you can then use to buy more projectiles for your SkyWall 100.

This is a war we cannot afford to lose.