We may earn revenue from the products available on this page and participate in affiliate programs.   Sometimes it seems... 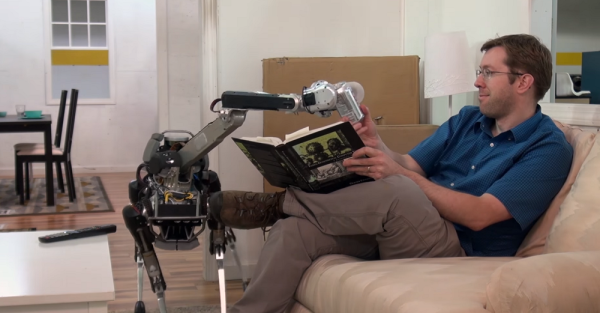 Sometimes it seems as if advancements in robotic technology don’t bear any real impact on the daily life of the everyman. Well, not anymore.

Introducing the SpotMini, a goofy-looking robot dog that can fetch a can of beer, do the dishes, and pick itself back up after slipping on a pile of banana peels (because, of course, you leave those things lying around everywhere). It’s like a butler, but with four legs and no emotions.

The SpotMini has a robotic arm on the top of its frame that it uses to manipulate items and pick itself up. The claw on the end also serves a cosmetic function, giving the robot an unmistakable doglike appearance. Without it, SpotMini would be a headless robo-dog, which sounds like something that belongs on the cover of an Iron Maiden album, and not in your home.

With SpotMini, Boston Dynamics, a subsidiary of Alphabet, a Google holding company, clearly sought to create something non-threatening, if not downright cute. The robot certainly looks more relatable than some of the other prototypes the company has come up with, like the robotic mule it designed for the Marine Corps, before the program was cancelled in December 2015. Case in point:

So if you’ve ever caught yourself wishing your dog was smart enough to bring you a cold one and tidy up around the house after a long day of work, but not smart enough to plot an insurrection, then keep an eye on SpotMini.

Check out the video by Boston Dynamics below.