This Combat Knife Has Seen Action In Iraq And Afghanistan 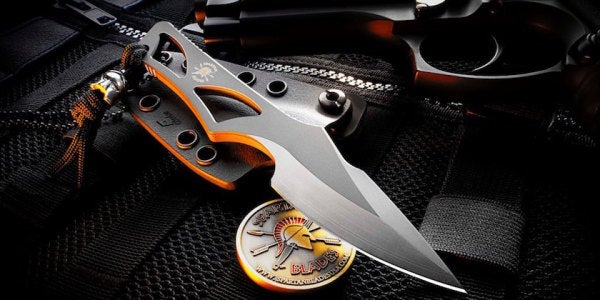 Several years ago, two retired Green Berets, Mark Carey and Curtis Iovito, decided to take a stab at knife manufacturing (pun INTENDED). As elite operators, Carey and Iovito knew plenty about weapons, but hardly anything about making them — a major obstacle, but one that, as men who’d spent their entire adult lives mastering difficult skill sets, they were better prepared than most to overcome.

And it didn’t take long. In 2008, Carey and Iovito began honing their craft under the mentorship of world-renowned bladesmiths Chris Reeve and Bill Harsey. That same year, they produced six prototypes for the Spartan Blade catalogue, all designed to be carried into combat. Then, to assess the quality of their product, Carey and Iovito turned first to their target clientele: Special Forces operators.

“We gave them to our buddies to test out in the field in Afghanistan and Iraq,” Carey told Task & Purpose. “We got feedback, and from there, Spartan Blades just continued to grow.”

Spartan Blades is based in Southern Pines, North Carolina, just a few miles down the road from Fort Bragg. The company’s motto is “Knives with Intent” — as in, these knives aren’t for show; although, they’ve become highly sought after by collectors around the world. The folks over at KnifeArt hooked us up with the model featured in the video below.

Spartan’s most popular model is the Enyo, a fixed drop point blade forged from Damascus steel that was originally designed for specialized units deployed to Iraq who needed a knife soldiers could carry discretely into situations where the rules of engagement mandated that weapons weren’t allowed.

Small, lightweight, and sharp enough to slash open a carotid or brachial artery, the Enyo is, from point to hilt, a combat weapon. In fact, Carey claims it’s drawn enemy blood on more than a dozen occasions in Iraq and Afghanistan. But the Enyo can also function as a utility knife. The dip at the base of the blade allows the handler to draw it precisely across flat surfaces so it can be used to do things like cut maps and make on-the-fly alterations to kits and uniforms.

The Enyo is meant to be worn in the waistband with body armor, and is designed so the handle doesn’t dig into your abdomen when you take a knee or enter or exit a vehicle. The Kydex sheath is MOLLE compatible and snug enough to hold the blade upside down. Even the lanyard, which is affixed with a pewter spartan helmet, serves a function, extending the length of the handle to accommodate the pinky finger without adding extra inches of steel.

The Enyo costs $150, so it’s a bit of an investment. (The model appearing in the video above features a fade pattern and costs $300.) But the knife was built to last, even in the most austere environments. According to Carey, the Enyo, like all of Spartan’s products, can keep an edge for the duration of a 12-month deployment without being sharpened once.

“Soldiers have a lot of equipment to take care of, and the knife is usually the last thing on the list,” Carey said. “They want it there and they want it to work when they grab it. So far, it’s worked out pretty well.”