They were a sisterhood of female combat soldiers, the “alphas of the alphas,” who initially served in direct combat with … Continued 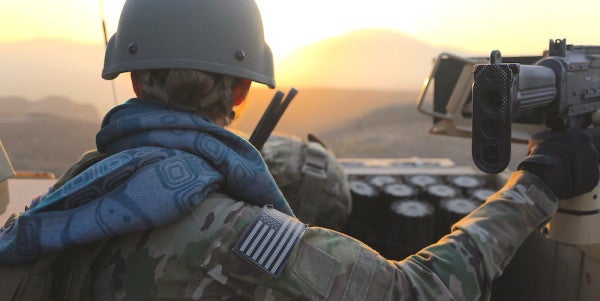 They were a sisterhood of female combat soldiers, the “alphas of the alphas,” who initially served in direct combat with Army Rangers and Green Berets two years before the prohibition against women in combat roles was lifted in 2013. Cultural support teams, women soldiers specially selected and trained to serve alongside special operations forces in direct combat, served on the battlefields of Afghanistan from 2011 until the close of combat operations in 2014. “Ashley's War: The Untold Story of a Team of Women Soldiers on the Special Ops Battlefield,” Gayle Tzemach Lemmon's new book profiling these teams, follows the first group of women to be selected for and deployed in support of U.S. Army special operations forces with the specific mission of accompanying operators in combat to engage with any women and children who might be on the objective.

The book most closely follows the path of 1st Lt. Ashley White, who was killed alongside two Army Rangers and teammates by an improvised explosive device during a night raid in October 2011. An accomplished athlete and student with dreams of becoming a physician’s assistant and starting a family with her husband, a fellow combat veteran, the National Guardswoman became the first cultural support team member to be killed in action.

“Ashley's War” celebrates the life of this remarkable young woman, as well as her sisters in arms, in their journeys to join the most elite forces in the Army. Lemmon notes two commonalities among these women: fierce love of country, and an often-quiet drive to be the absolute best at everything, embracing every challenge.

The cultural support teams emerged out of the conflicts in Iraq and Afghanistan when the military recognized that male soldiers were unable to engage with women — half of the population — due to highly conservative cultural norms in the Muslim countries, especially so in tribal Afghanistan. This meant that valuable intelligence was being lost — including highly critical information of force protection value. Simply put: Americans were being killed because nobody could talk to local women.

American special operations forces have historically employed scores of women as “enablers” — that is, not in billets whose specific mission is direct action. While the combat exclusion ban was still in place, this “support” role became the work-around to enable women to attach to units whose role was direct combat. Olson ordered the creation of cultural support teams in 2010, and by 2011, women were serving among Army Green Berets, Rangers, and Navy SEALs, earning their Combat Action Badges, and the respect of their male teammates.

Before arriving at assessment and selection, some future female service members had already been on multiple combat deployments. Many had been put in billets or leadership roles that were supposed to be male-only, but had earned the trust and respect of their senior leadership, who ignored the rules and saw only a good soldier with leadership potential. Several of the women came from fields that had sounded exciting on paper, but proved to be primarily office work, and wanted to serve in the field. A number of these women were infuriated that they were denied admission to combat arms specialties when men in their West Point or ROTC classes were sent to the infantry, artillery, and other combat jobs unwillingly.

Among their numbers, the women engaged in the cultural support teams counted an Ironman triathlete, an FBI interrogator, marathon runners, an NFL cheerleader, collegiate gymnasts, and a high school football player. White herself was a former gymnast who completed Crossfit workouts and ran several miles a day, and would go for hikes with rocks in her backpack. Only 5-foot, 3-inches, the petite, blonde 24-year-old soldier was an incredible athlete who could do over two dozen pull-ups.

In her book, Lemmon also highlights that despite these women's exceptional patriotism, athleticism, and drive, they were also intensely feminine. Shortly before training, White married her college sweetheart in a fairy tale wedding, playing the part of princess for a day. She would also bake fresh bread in the cultural support team office in her unit’s tactical operations center in Kandahar. Other team members were mothers and beauty queens.

It is this dichotomy of femininity and strength that is most remarkable about the cultural support team members, and Lemmon strives to articulate this salient fact throughout the book. That is, femininity and physical and emotional strength are not mutually exclusive, but rather irrevocably linked.

A few years ago, months before the combat exclusion ban was lifted, a friend, a combat veteran, said to me, “The fundamental reason we don't want women in combat is not truly because we fear that they can't do the job. There are many women who can, but because we are absolutely horrified by the idea of women coming home in body bags.”

White’s death threw the cultural support team program into an existential crisis. Would the program be discontinued because of her death? The answer was no, the program continued until the end of 2014 and conclusion of combat operations in Afghanistan. These women proved that they were indispensable in their roles, and above all, that women belonged in combat.

The use of women on cultural support teams became a “new normal” for SOF units in Afghanistan. As Lemmon points out in the conclusion of “Ashley’s War,” the question remains as to what will follow the precedence set by their success. These women were elite, highly trained, and ultimately experienced combat soldiers. Yet after their deployments, they had to return to their old jobs. However, these servicewomen not only proved the necessity of having women “on the X” with SOF units, but that women can succeed as combat soldiers in the most austere environments, and be accepted by their male counterparts. They only need to be given the opportunity.