For the tacticool aficionado with a trust fund. 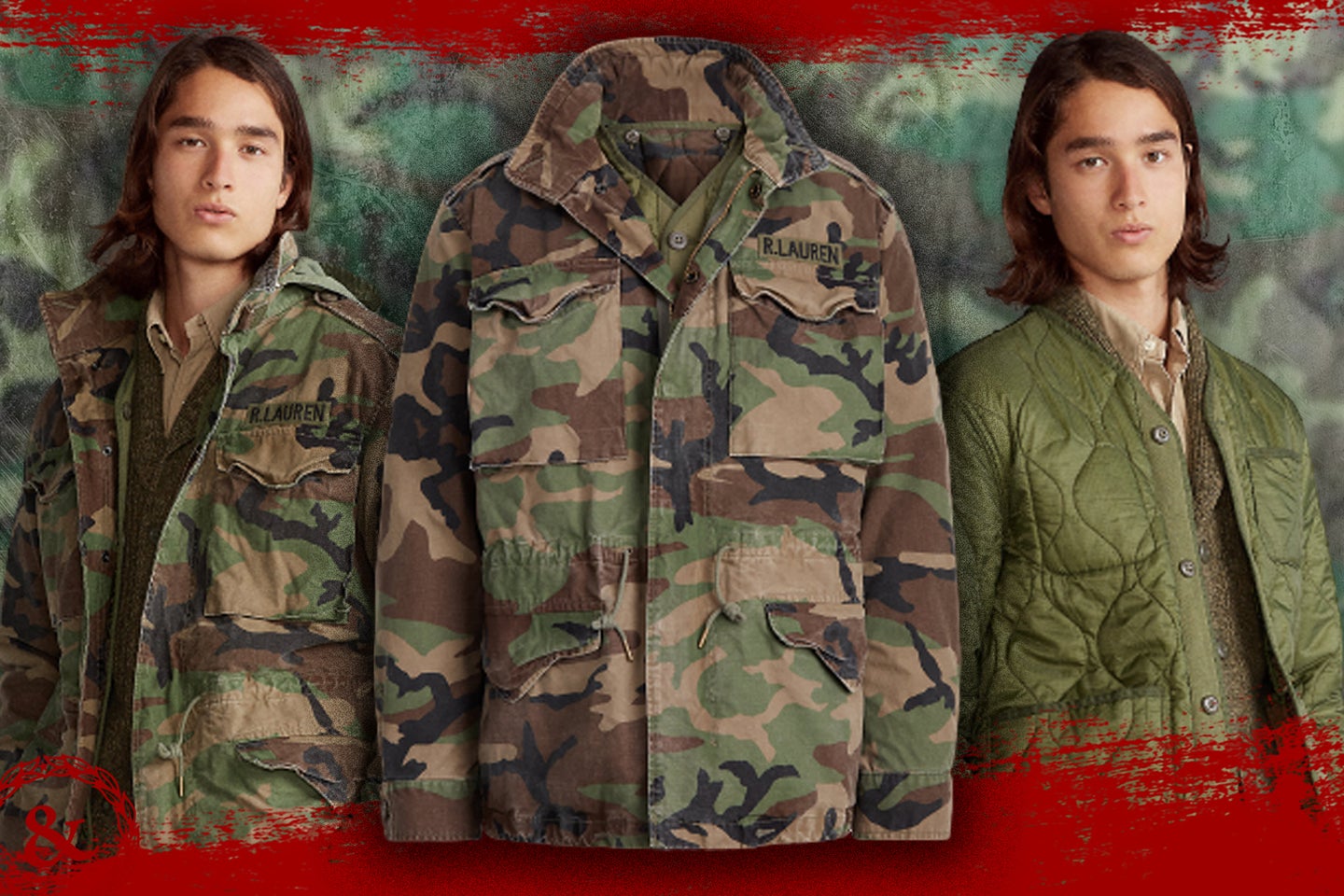 Ralph Lauren, the king of “thank me for my almost service” swag is at it again, this time with a pricey new jacket that’s best described as a high caliber fashion fail.

The Field Jacket & Reversible Liner comes with a “stowaway hood with embroidered eyelets and a built-in brim,” a smattering of pockets and a rip-off of the military’s beloved poncho-liner styled as a sweater. At $498 it’s also outrageously overpriced, and practically screams: “I never wanted to join the military — I don’t do mud — but wearing camo makes me seem edgy.”

There’s a lot to unpack here, but let’s roll up our sleeves and give it a go.

For starters, Ralph Lauren’s “jacket” appears to just be an expensive knock-off of existing military gear. Stylistically, it bears a resemblance to the U.S. Army’s Battle Dress Uniform top, which saw widespread use from the 1980s on into the early 2000s before its retirement in ’08. Though, as a reader pointed out after publication, Ralph Lauren’s coat may have been modeled after the M65 Field Jacket, which includes a hood as well as an inner lining garment made from the same fabric used in poncho liners.

It’s also wildly overpriced. An actual BDU blouse can be bought for a pittance — anywhere between $20 from online retailers, to $32 from the Army-Navy store (surplus M65s seem to go for roughly $90 online). Though if you want a real BDU top or M65 jacket top, you could always prowl the pawnshops that dot the landscape outside of military bases, where you’re sure to find one that smells like JP-8, CLP, and Copenhagen.

But hey, if you really want to join Ralph Lauren’s Rangers, then you need to go all in. Fortunately, they’ve got you covered with their Classic Tapered Fit Cargo Pant, which is basically a $138 pair of BDU skinny trousers with some random dongles and a high cuff at the ankle.

As for the poncho liner sweater, I’d be impressed if it didn’t already exist in the form of the M65 liner, or if actual military personnel hadn’t made their own better versions of it. Like this jacket that was made by a GI during the Vietnam War, and came embroidered with the words: “When I die I’ll go to heaven because I’ve spent my time in hell.”

However, if you’ve got hundreds of dollars to blow on both the trousers and blouse and really want to look like you’re a member of Operational Detachment Abercrombie and Fitch, then be my guest.

Apparel companies co-opting the military’s style is nothing new, but in recent years there’s been a surge in products catering to those with incredibly deep pockets — and in all likelihood, only a tangential connection to the military, at best.

This faux military service catalog includes Marine Corps Dress Blue knock-offs, an armory’s worth of combat kicks, enough MOLLE to store the world’s supply of chem lights, and even $30 reflective-belts.

Related: Behold! A vintage woobie jacket from the Vietnam War

Seeing as we’re on the topic of shamelessly making a buck on the military aesthetic, Ralph Lauren’s latest foray into tacticool clothing gives me an idea. What if veterans decided to do this in reverse and started selling their old silkies and skivvy shirts on eBay at a markup?

I mean, just think of the easy money! All you have to do is list your old undies as “military-grade” and “field-tested” which as we all know is just code for “old and shitty,” then toss them online with a ridiculous price tag and watch those greenbacks roll in.

UPDATE: This article has been updated to note that Ralph Lauren’s Field Jacket was likely modelled after the M65 Field Jacket.