I’ve written a lot about civilian businesses hawking overpriced tacticool swag over the years, from mil-spec sneakers and kicks to... 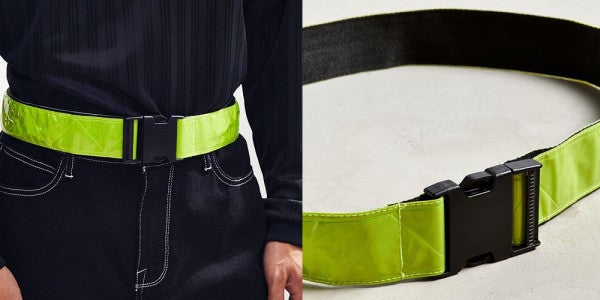 I’ve written a lot about civilian businesses hawking overpriced tacticool swag over the years, from mil-spec sneakers and kicks to dress blue knockoffs and buffalo jackets to a pinstripe vest that’s more pocket and magazine pouch than article of clothing. But I never thought I’d see the day when the one piece of military gear most likely to get you an ass-chewing for not wearing, would go for $30 at a trendy clothing outlet.

Thanks to Stars and Stripes’ Chad Garland, I know that nightmare has become reality:

The Reflective Physical Training Belt, made by the military surplus store Rothco, is now available at Urban Outfitters for $30 — though as Garland points out, this doesn’t account for the additional $5 standard shipping cost, or the fact that you can find cheaper reflective belts online, or at your base PX.

For those who served in the post-9/11 era, we know this little strip of neon yellow, green, or orange awful by other names: reflective belt, PT belt, glow belt, “belt, high visibility,” or, most commonly, as “that stupid piece of crap I have to wear so I don’t get screamed at by an overzealous SNCO during PT.”

Related: The Reflective Belt: An Icon Of The Global War On Terror »

As Angry Staff Officer previously pointed out for Task & Purpose, the reflective belt entered the military in the 1990s as a way to minimize the risk of accidents and injuries among troops working out after hours. But as the Global War on Terror ramped up, it brought with it more than a decade of asinine rules. When, where, how, and what color of reflective belt to wear became just another regulation — and one that seemed to change depending on who was in charge. In time, wearing a reflective belt, or getting chewed out over one, simply became a fact of military life.

Now, I don’t expect the typical civilian shopper to be aware of any of this, or the seething rage this piece of gear inspires. But if Urban Outfitters wants to cash in on the military vibe, why not make it authentic? Personally, I hope each belt comes with a downloadable smartphone app that screams at you for being “out of regs” if you step outside without your Reflective Physical Training Belt.

H/t to Chad Garland for not only spotlighting this PT belt on Urban Outfitters, but for pointing out that you can buy it on base, or online elsewhere for a fraction of the price. (Though really, why the hell would you?)