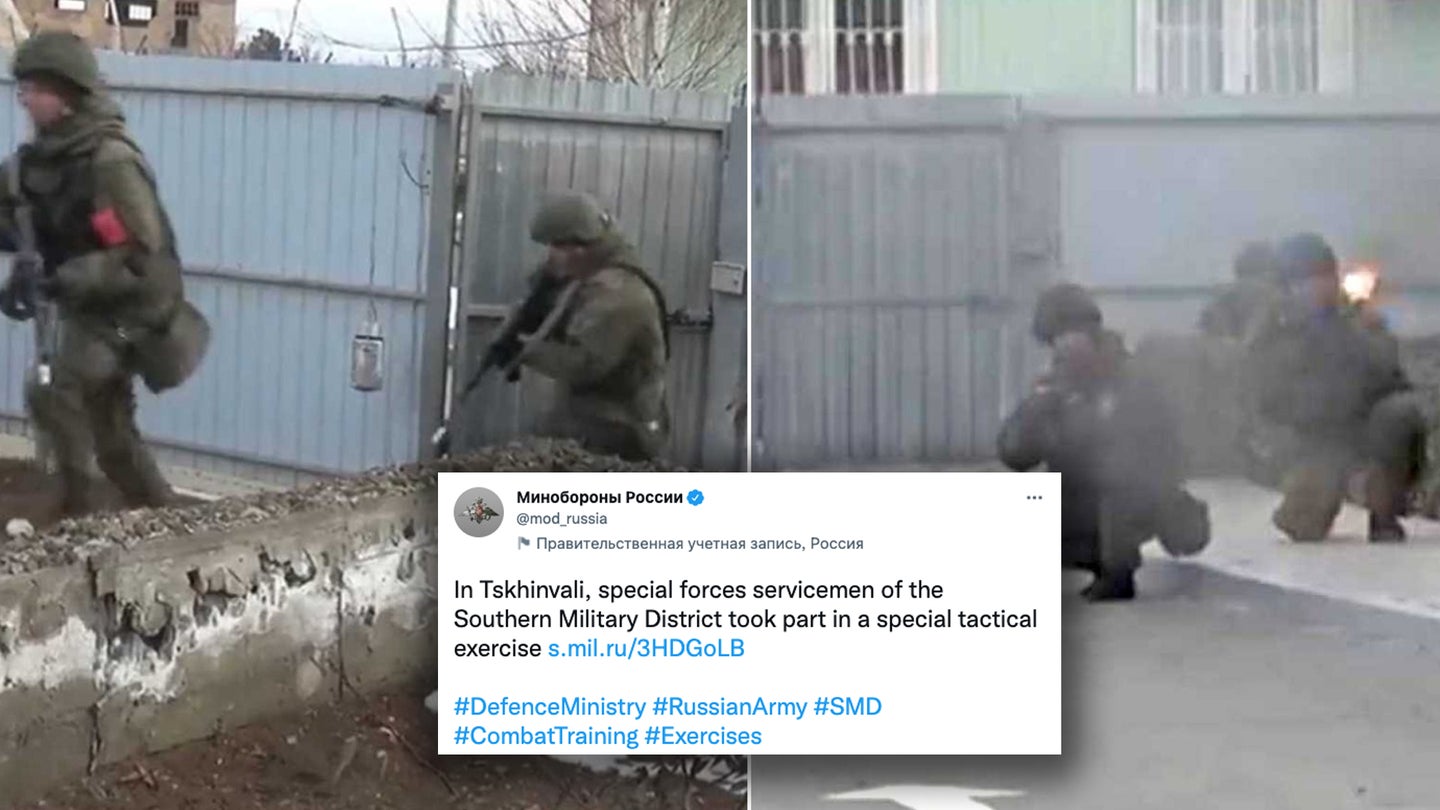 The eyes of the world are on Eastern Europe as Russia menaces the Ukrainian border, poised to escalate its ongoing 8-year invasion there amid speculation that NATO ally states may increase military support by sending actual troops into the country. Yet despite fears that the Russian military buildup on the Ukrainian border may spark the next big war, there are legions of naysayers who crow in breathless admiration of Russia’s military strength for one simple reason: Russia is allegedly going to run NATO’s shit because while the U.S. military was busy making commercials featuring two gay moms, goofing off in the barracks making TikTok videos, or issuing maternity flight suits, Russians were supposedly doing manly shit like push-ups, backflipping and throwing sharpened entrenching tools, and legalizing domestic violence.

Where does all this misplaced adoration come from? After all, the Russians have no fifth-generation fighter jets to speak of, their main battle tanks are either piston-driven 1970s antiques, flimsy export T-90s, or the pipe dream that is the T-14 Armata, and their single aircraft carrier is a coal-burning bathtub that specializes in breaking down and bolting Su-33s into the ocean. Russian artillery is apparently world-class for range and destructive capabilities, and their infantry must be a badass band of carnivorous apex predators forged of pure Stalinium, right?

Apparently not. Early on Tuesday, the Russian Ministry of Defense posted a video, and an associated press release, to their official social media that featured a clip of alleged Russian “special forces” troops training in Georgia, apparently practicing Military Operations in Urban Terrain, known more commonly as “MOUT.”

The video drew first the attention, then the amusement, of U.S. service members and veterans on the internet, myself included, for obvious reasons. I’m no expert in MOUT, and  I’ve never gone to a specialized school for it, but I know what the Marine Corps teaches every non-infantry Marine and was able to spot several issues with the tactics of the Russians in the video. When you couple that with the fact that nearly every other American service member past or present with internet access had something to say about it too, that means this must be some pretty terrible stuff. Here’s the bulk of what caught both my eye and those of fellow service members and veterans online:

Moving slowly through a choke point!

Trying to fit a number of people through a narrow hole is a great way to ensure that they come in one by one, only to get cut down, one by one. In fact, it’s American machine gun doctrine to place machine guns with a good line of sight on choke points like bridges, canyons, and city streets. In this clip, Russian troops are using a small gate in a flimsy fence, moving through slowly, and then proceeding to stand in the open while hip-firing their rifles. Even without taking into account the fact that a well-trained machine gun crew would immediately start sending rounds through the non-bulletproof corrugated metal the moment they realized there were troops on the other side, simply running through a gate without first checking to see if there are enemies prepared to ambush is something that doesn’t stand up to common sense scrutiny.

Anyone who has any trigger time on a shoulder-fired weapon system has probably discovered that you should probably use the sights on the weapon to ensure your round goes on target. It’s in the name, “shoulder-fired.” Somehow that wasn’t explained to the soldiers in the clip, because the majority of the troops in this video are firing, often while moving, as if they’re extras in the Arnold Schwarzenegger classic “Commando.” You can’t deliver effective fire when you can’t even aim your weapon.

“Five men is a juicy opportunity, one man is a waste of ammo!” said Sgt. 1st Class Horvath in the 1998 World War II classic “Saving Private Ryan.” It doesn’t mean that your enemy won’t shoot at one soldier, but it does mean that when they do they won’t wipe out an entire squad in a few short bursts, and will likely prioritize larger groups as targets first. Bunching up in the open, freezing, and firing is a guaranteed way to ensure that your enemy focuses their attention, and their fire, on your position.

“Masking fires” is when you run into the line of fire of the person who is covering your advance, giving them the choice of shooting you in your back or lifting their fire. It’s something that nearly every soldier and every Marine learns in their initial entry training. Beyond that, it’s common sense to not run out in front of a firing machine gun, but that seems to have escaped the Russian troops in the video. On two separate occasions, the folks in this video run in front of a firing PKM machine gun, which fires a powerful 7.62x54R cartridge capable of incredible damage to the human body, even through the gaps in the Russian body armor. Had they been firing live rounds rather than blanks, they would have smoked several of their teammates.

Throwing a grenade into an elevated opening!

Don’t do this. This is just asking for a grenade to miss the opening, fall back onto your head, and kill or maim you. On top of that, throwing it and just standing out in the open staring at where you threw it is the equivalent of wearing a “shoot me” sign.

Firing 1-2 round bursts out of a belt-fed machine gun!

All in all, the Russian tactics look so bad that I refuse to believe that this video is not some sort of bizarre, elaborate psyop trick to make NATO think they’re far worse than they are. I’ve seen privates in MCT maneuver more effectively than this, and the tactics in this video make the infamous 10th Mountain CQB video from last year look like perfectly polished and rehearsed DEVGRU hype reels. So much for those push-ups.

With that being said, here are some choice reactions to the video from military members on Twitter: