It’s nearly Christmas when it hits you: You never did get the operator in your family that perfect necklace of... 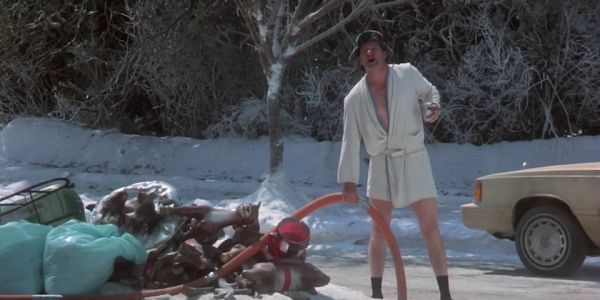 It’s nearly Christmas when it hits you: You never did get the operator in your family that perfect necklace of ISIS ears to go with the gold plated Iraqi AK-47 they liberated from one of Saddam’s palaces in 2005. What do you buy the Army Ranger who has everything? Is there something in particular the MP in your life would really love? What does the infantryman want under the Infan-Tree?

Sure, you’ve got the care package deal figured out, but now that the nation’s foreign wars seem to be winding down for the moment, chances are your trooper might actually make it home for the holidays. A carton of beef jerky and a Listerine bottle filled with green vodka just isn’t going to hack it anymore.

Not to worry. There’s still a little bit of time left. This quick guide will help you find the perfect gift for the veteran in your life.

The M2 machine gun is one of the most recognizable crew-served weapons one could dream of strapping to the top of a Humvee. Shooting up to 1,200 rounds a minute and able to punch through armor, this baby is perfect for liberating former Soviet republics. Indeed, for any troop who’s ever ventured outside the wire, the sight of a freshly cleaned spinning death machine like the M2 is enough to bring a tear to the eye.

That’s why various companies have started making bottle openers from .50 cal rounds. You can hold that spent brass in your hand, crack a cold one and raise it up to honor the M2. Then pour one out for all the walls, vehicles, and people who’ve met one from the wrong end.

Those green ammunition boxes are the most useful storage solution ever devised by man. Honestly, I find it insane that we don’t store everything in ammo cans. First off, they are air and water-tight. They come in a wide variety of shapes and sizes, suitable for any caliber of ammo, or however much dried quinoa you need to store. Versatility? You bet. You can put anything in one of these suckers — from a few pounds of Gummy Worms to a few ounces of Afghan Kush. They have a large, easy-to-use latching system. And they’re real good for sitting on. Kick ’em around, dent ’em, scratch ’em up. No worries. They take just ten minutes to repaint. For the full effect, you want your can beaten up anyway — how better to lend your Star Wars Lego collection that extra dash of wartime authenticity?

A while ago, someone got the great idea to make 550-cord bracelets and market them as “survival” bracelets. I can’t think of any situation where I’d need just 10 feet of 550, unless I broke a boot lace or was looking to garrote someone. If your giftee is fully committed to the troop life, he or she will already have a bug-out bag filled with rat-fucked MREs, decommissioned uniforms and steel canteens he or she paid way too much for at an Army surplus store, just in case of emergency. There’s no room in that bag for friendship bracelets. Instead, pick up a 1000 ft. spool and let your prepper soldier decide exactly how much to take. (The correct answer: 1000 feet. And if you don’t take every inch, you’re stealing valor.)

Chances are your vet already has one of those high speed baseball caps with the Velcro flag on it, but there’s a problem: You can only wear so many Velcro flag patches at a time. That’s where this tactical beer koozie comes in. It boasts a nice big swatch of Velcro for you to slap an extra flag onto, as well as a strip of PALS/MOLLE, so you can attach your favorite beer (or soda) to the outside of your body armor. Perfect for the next family reunion.

DISCLAIMER: If you put anything other than American beer in this coozie, you are legally required to remove the Stars and Stripes and replace it with a hammer and sickle. And no, Budweiser is not American.

Literally anything with MOLLE

Modular Lightweight Load-carrying Equipment is one of the most versatile load-bearing solutions given by God to humankind. It’s just loops. Loops that you can slip MOLLE compatible things through. To carry.

You’ll find that many bags that refer to themselves as “tactical” are just backpacks with MOLLE all over them. Fair enough. A mere $15 markup is well worth it for the opportunity to terrify random civilians by studding my all-black backpack with multicam magazine holders. Best of all, rather than filling them with ammo, I mostly carry Twizzlers — enough for just about any contingency.

Chances are your veteran reminisces about the good old days of deployment when every day was all about hanging with buds, guzzling energy drinks and loading up a fresh dip. There’s nothing quite like the mix of epic boredom, a constant stream of nicotine and whatever cocktail of chemicals Rip-Its contain. I never had the guts to look.

No matter what you choose, the thing to really remember is that veterans are people too, and we like many of the same things everyone else does — like reconstituted meat products, high explosives and explicit pornography of questionable provenance. And you rarely go wrong with booze.