Ecstasy Is So Effective In Treating Vets’ PTSD, It’s Just Been Designated A ‘Breakthrough Therapy’

The U.S. Food and Drug Administration has designated MDMA as a “breakthrough therapy” for the treatment of post-traumatic stress disorder,... 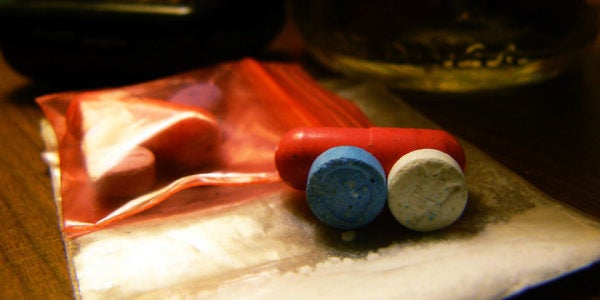 The U.S. Food and Drug Administration has designated MDMA as a “breakthrough therapy” for the treatment of post-traumatic stress disorder, a significant milestone in the decades-long effort to turn the notorious illegal party drug — better known as ecstasy or “Molly” — into a prescription medication, Washington Post reports.

Paxil and Zoloft are currently the only medications approved for the treatment of PTSD. As the Post notes, both drugs have proven largely ineffective in treating the disorder in veterans.

“If you’re a combat veteran with multiple tours of duty, the chance of a good response to these drugs is 1 in 3, maybe lower,” John Krystal, chairman of psychiatry at Yale University and a director at the VA’s National Center for Psychiatry, told the Post. “That’s why there’s so much frustration and interest in finding something that works better.”

Remarkably, the FDA’s decision to designate MDMA as a “breakthrough therapy” marks the first time the rare designation has been granted to a psychiatric treatment, as it is reserved only for drugs that work alone or “in combination with one or more other drugs to treat a serious or life threatening disease or condition,” according to the FDA website. The drug must also demonstrate “substantial improvement over existing therapies.”

The effort to examine the medical applications of MDMA has been spearheaded by the Multidisciplinary Association for Psychedelic Studies, or MAPS, a nonprofit organization founded in 1986 with the stated goal of developing “medical, legal, and cultural contexts for people to benefit from the careful uses of psychedelics and marijuana.” Its founder, Rick Doblin, is widely regarded as a pioneer among advocates of psychedelic drug use.

The new designation could open the door for MDMA as a prescribed treatment for U.S. military veterans. MAPS sponsored the Phase 2 clinical trials of MDMA-assisted psychotherapy, which began more than a decade ago, and many veterans of the wars in Iraq and Afghanistan enrolled in the trials. Almost all of them had seen combat, according to MAPS psychiatrist Dr. Michael Mithoefer, who spoke with Task & Purpose in December.

“There’s a lot of sleep disturbance, a lot of anxiety, and a lot of rage,” Mithoefer told Task & Purpose of the veterans who participated in the trials. “For some, the most troubling symptom was this rage that would come out towards their wives or their family members. It was really interfering with their lives and relationships. Most of them were not able to work before they started this study. Some had repeated suicide attempts.”

The Phase 2 trials were conducted as double-blind studies, meaning that neither the patients nor the psychiatrists guiding the therapy sessions knew whether actual MDMA or a placebo was being administered. Patients were given a total of three doses over a period of several months, while therapy continued between sessions. (“There are no take-home doses,” Mithoefer explained.) By the end of one study, two-thirds of patients no longer met the criteria for PTSD. A follow-up study showed that 88% of those patients were still PTSD-free more than three years after their last dose of MDMA.

In November 2016, the FDA greenlit large-scale, Phase 3 clinical trials to further investigate MDMA’s potential benefits — the final step before its approval as a prescription drug is possible. Two MAPS-sponsored Phase 3 trials of MDMA-assisted psychotherapy are scheduled to start sometime in 2018, and enrollment will begin in the spring. The trials will focus exclusively on patients with severe PTSD.

The “breakthrough therapy” designation means that the FDA will work closely with MAPS during the Phase 3 clinical trials to expedite the development and review of MDMA-psychotherapy. MAPS has raised or pledged half of the $25 million required to conduct the Phase 3 trials, and still needs to raise $12.5 million, according to a MAPS press release. If all goes according to plan, MAPS says MDMA could be available as a prescription drug in the U.S. as soon as 2021.

When it was first introduced to the psychiatric community in the 1970s, MDMA was embraced by thousands of psychiatrists as a drug that could possibly help treat anxiety disorders, including PTSD. However, before formal trials in the U.S. could get underway, the drug began surfacing on college campuses and in dance clubs around the country. MDMA’s popularity as a party drug ultimately led federal officials to ban it, listing it as a Schedule 1 controlled substance in 1985, and progress on the medical front came to a halt.

The party-drug stigma persists to this day, in large part thanks to its association with electronic dance music festivals, where fatal MDMA overdoses occasionally make headlines. “It’s a feel-good drug, and we know people are prone to abuse it,” Dr. Charles R. Marmar, the head of psychiatry at New York University’s Langone School of Medicine, told The New York Times last year after the FDA approved the Phase 3 clinical trials. Marmar added that prolonged use can lead to serious brain damage.

But MAPS maintains that MDMA psychotherapy bears little resemblance to recreational MDMA use. The drug’s euphoric effect is not the end goal; rather, the euphoria is intended to act as a sort of truth serum that helps break down internal barriers preventing people with PTSD from identifying and addressing the underlying causes of their suffering. Proponents of the treatment are also quick to point out that doses administered in the clinical setting contain only MDMA, and not the other, potentially harmful substances often found in street versions of the drug.

“We’re not just doing a drug study,” Mithoefer said in December. “We’re studying MDMA-assisted psychotherapy.” Adding, “The intention is to heal the PTSD in a very safe, legal setting. That tends to be much more likely to foster therapeutic change than if someone is taking it at a party.”