Getting Cheated On Is A Serious Hazard To Your Health, Says Science

Here comes Jody, on his way to steal your girl, clog your arteries, and plasticize your liver. Ever had that... 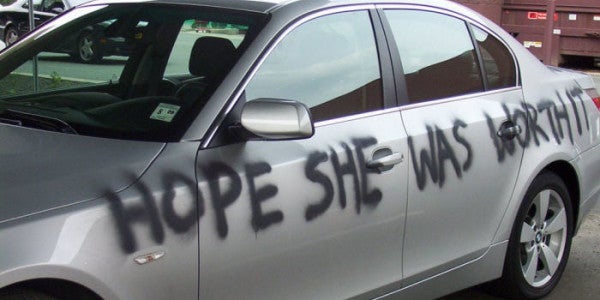 Here comes Jody, on his way to steal your girl, clog your arteries, and plasticize your liver.

Ever had that sinking feeling downrange, when the care packages and emails dry up, that your significant other is doin’ the do while you’re embracing the suck? Well, guess what, buttercup: Crying into your dopp kit over boo’s infidelities could wreck your PFT score, bodily functions, and longevity on this mortal coil.

Related: A Brief History Of Jody, The Original ‘Mr Steal Your Girl’ »

That’s science, buddy, according to a new study in the Journal of Social and Personal Relationships, coauthored by doctoral student M. Rosie Shrout of the University of Nevada, Reno, and flagged recently by Eric Dolan of PsyPost. Dolan explains:

For their study, the researchers surveyed 232 college students who had been cheated on within the past three months…

“As we expected, people who experienced more emotional and psychological distress after being cheated on engaged in more risky behaviors,” Shrout told PsyPost. “They were more likely to eat less or not eat at all, use alcohol or marijuana more often, have sex under the influence of drugs or alcohol, or over-exercise. Being cheated on seems to not only have mental health consequences, but also increases risky behaviors.”

Shocker, right? But here are three more freaky facts for you:

So if you’re gonna get dropped like a leaky just-microwaved Hot Pocket, be an asshole about it. It sucks for everyone around you, but apparently it’s good for your health. Snowflake.