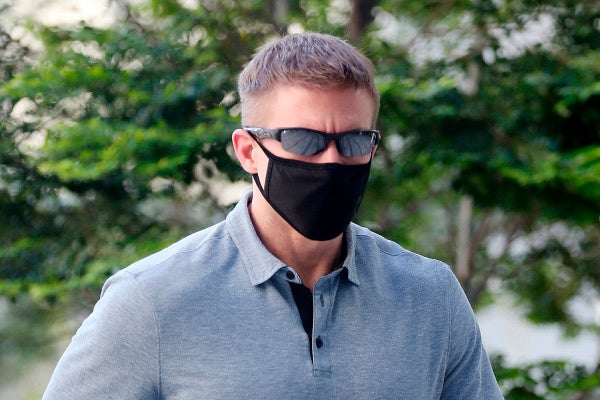 An instructor pilot assigned to the Alaska Air National Guard was sentenced to four weeks in a Singapore jail on Wednesday for violating the country's COVID-19 stay-at-home orders.

Brian Dugan Yeargan, a 44-year-old FedEx pilot from Eagle River, Alaska, arrived in Singapore from Australia on April 3 and was immediately served with a mandatory stay-at-home notice for a period of 14 days, according to the government of Singapore.

After just two days, Yeargan left the location of his quarantine, took a train to a busy commercial area, and purchased multiple personal items over the span of three hours, the government alleged.

Yeargan's excursion took place just days after Singapore announced a “circuit breaker” curbing social and economic activity in an effort to slow the spread of COVID-19.

Just two weeks later, Singapore had the highest number of positive COVID-19 in all of Southeast Asia.

Here's how Yeargan's jaunt around Singapore went down, according to the Anchorage Daily News:

During court proceedings, a prosecutor told the judge Yeargan walked to the airport station, took a train to the busy City Hall station, and walked about 30 minutes to a shopping mall, media reports said.

Yeargan recalled there were about 1,000 people at the station and 10 to 20 people at each shop he visited, according to an account in Channel News Asia. He bought a thermometer and a few boxes of face masks at four stores; at that point, it was difficult finding such supplies in Alaska.

His lawyer said he wore a mask on the trip.

As he walked to another train station, someone from FedEx called and told Yeargan to go back to his room, reporters covering the proceedings wrote. He got a taxi right away.

Yeager pleaded guilty to one count of breaching the stay-at-home order, according to the Anchorage Daily News, telling the presiding judge that he never received a physical copy of the notice.

“I’d like to humbly offer my apologies and say I have the highest regard for the Singapore people and its laws,” Yeargen reportedly told the court, per Channel News Asia.

Yeargan has a long history with the U.S. military. According to his LinkedIn profile, he served in the Army for just two years, from 1994 to 1996. His father told the Anchorage Daily News that his son was a former Army Ranger, although Army Human Resources Command could not immediately confirm the nature of his service.

After several years as a flight instructor with Take Flight Alaska, Yeargan enlisted in the Air Force in 2002, becoming a Cessna T-37B instructor pilot at Vance Air Force Base. He later became the Director of Wing Airlift Operations at McChord Air Force Base and a C-17A Instructor Aircraft Commander at Elmendorf Air Force Base, according to his LinkedIn profile.

After leaving the Air Force in 2012, Yeargan worked as a pilot for Alaska Airlines before joining FedEx in 2017.

“FedEx adheres to all regulations and guidelines from government authorities related to the containment of COVID-19, and ensures that it takes the necessary steps to maintain the high standards of behavior expected of our employees to protect the health and safety of our team members and the communities in which we serve,” FedEx spokeswoman Davina Cole told the Anchorage Daily News.

Yeargan has served as a C-17A instructor pilot for the Alaska Air National Guard since he left active-duty. The AANG did not immediately respond to request for comment.