He used 37 radio frequencies to coordinate 21 aircraft, during a five hour battle — all while flying his own aircraft and providing close air support. 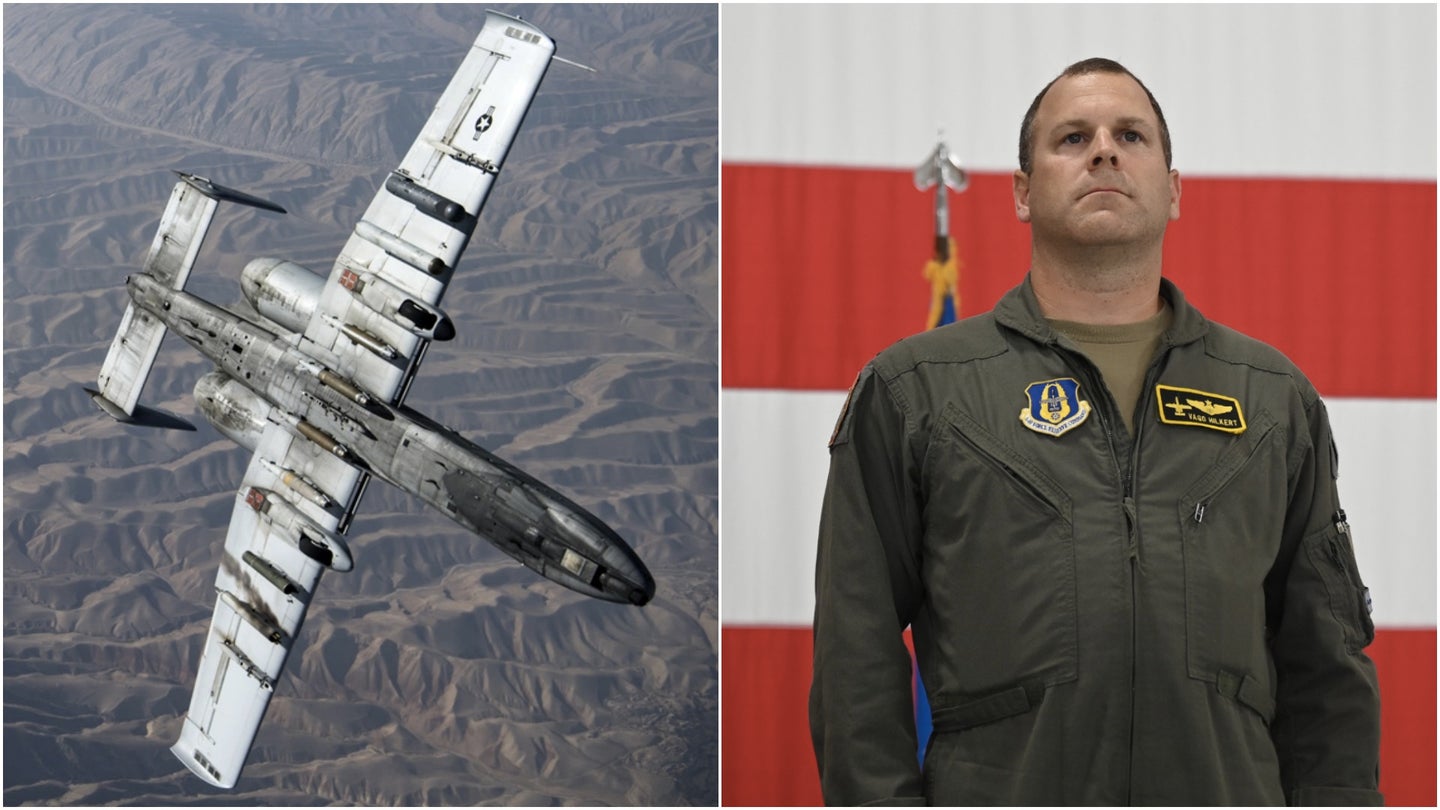 If you have difficulty walking and chewing gum at the same time, imagine coordinating 21 heavily-armed aircraft across 37 different radio frequencies in the middle of the night during a brutal firefight where dozens of friendly ground troops are in danger of being overrun. Oh, and by the way, you have to do all this while flying your own 25,000-pound aircraft through dark, rough terrain.

It sounds impossible, but Air Force Maj. Mike “Vago” Hilkert pulled it off while flying an A-10 Thunderbolt II attack plane over an intense rescue mission in Afghanistan on April 23, 2011. Ten years later, Hilkert was awarded the Distinguished Flying Cross on October 2 at Whiteman Air Force Base, Missouri. The DFC is one of the branch’s highest awards, one of several awarded to airmen who fought in what an Air Force officer called “one of the most intense combat rescue missions” of America’s 20-year long war in Afghanistan.

“For the context of this mission, that this Distinguished Flying Cross is being awarded for, the other medals that have been awarded already to members of the armed forces include four Silver Stars – two of them to helicopter pilots, two of them to pararescue jumpers – and three Distinguished Flying Crosses with valor,” said Lt. Col. Rick Mitchell, the 442d Operations Group deputy commander, in an Oct. 28 press release.”

It all started in the early hours of April 23, 2011, when the 83rd Expeditionary Rescue Squadron, based at Bagram Airfield, sent two Air Force Pave Hawk helicopters, call signs Pedro 83 and 84, to respond to an Army OH-58D Kiowa helicopter crash in Kapisa Province in northeast Afghanistan. Pedro 83 carried three pararescuemen, highly-trained airmen who dive, climb, jump or drop into combat zones or remote areas to rescue downed pilots or other service members, while Pedro 84 carried two. The rescuers immediately came under fire from unnamed local enemy fighters.

The Pave Hawks started taking hits as Pedro 83 lowered its three pararescue jumpers onto a ridge a few hundred feet uphill from the crash site. There, the PJs found one of the Army helicopter pilots, who said the other pilot was unconscious and still in the downed Kiowa. Meanwhile, Pedro 84 dropped its two PJs as close to the crash as possible. There, the two PJs, Staff Sgts. Zachary Kline and Bill Cenna, found that the pilot had died, and they prepared to hoist him out.

“We were going to do everything in our power to get him back,” Kline told his alma mater, Alaska Pacific University, about the fallen second pilot. “If I had to clip in and hold him, I would have. There was no way he wasn’t coming back.”

The enemy had other ideas: right after dropping Kline and Cenna to the deck, Pedro 84’s flight engineer was shot in the leg, and the Pave Hawk had to fly back to Bagram to get him medical attention. Enemy fire also forced Pedro 83 to cut its hoist cable and do “a daring one-wheel hover” just to get its three PJs and the surviving pilot back aboard, the press release said.

That left Kline and Cenna stuck on the ground with the fallen Kiowa pilot. While an AH-64 Apache attack helicopter provided air cover, the situation was deteriorating. At one point, Kline and Cenna had to sprint from a rock outcropping where they were taking cover to a nearby ravine after the downed Kiowa helicopter exploded.

“I had noticed during my initial scan that there was still a rocket pod with rockets” in the Kiowa, Kline said. “That was my concern – that it was going to be like the Fourth of July … I have molten metal on my [body armor] kit from where the helicopter exploded.”

But the cavalry was almost there. Capt. Rustin “Trombone” Traynham and then-Capt. Hilkert, both of the 74th Expeditionary Rescue Squadron, were off supporting other ground forces when a call for help came over the Guard frequency.

“You need to understand that in a combat zone, using Guard is sacred – a last resort,” said Mitchell. “A true sign that things are bad, and someone needs help.”

As Kline and Cenna waited in the ravine, Traynham and Hilkert joined up with Lt. Col David “Seymour” Haworth to form Sandy 1 flight, a call sign used since the Vietnam War by aircraft running close air support for search-and-rescue missions. When the A-10s arrived on the scene, they searched for the PJs while Hilkert set up airspace restrictions and communications relays to the Air Support Operations Center, the Combined Air Operations Center and Joint Personnel Recovery Center. They also shot rockets into the valley to give Kline and Cenna some breathing room, but it didn’t last long.

A half-hour after the A-10s arrived, the PJs were pinned by close range heavy machine gun fire. With Jedi-like situational awareness, Hilkert found the threat while he was hooking up to an aerial refueling tanker to get more gas. For mere mortals, aerial refueling takes an extraordinary amount of concentration, but Hilkert did it while marking targets a mere 50 meters away from Kline and Cenna’s positions. With the targets marked, Hilkert’s wingmen opened up with their 30mm cannons, “saving Kline’s and Cenna’s lives,” the press release said.

Later that morning, a 32-man Army quick reaction force landed at two locations on the battlefield and was immediately attacked. One soldier was killed, several more were wounded, and the rest would need air support to get out of there alive. Hilkert rose to the challenge.

“While locating enemy positions, Hilkert simultaneously monitored the location of one half of the QRF with his binoculars, and the other with his targeting pod,” the press release said. “He kept the rest of the aircraft apprised of their positions to allow the Apache helicopters to strike without hitting friendlies. Additionally, he coordinated for a tanker overhead and assigned intelligence, surveillance, and reconnaissance assets to search for enemy positions in the surrounding area.”

In all, he used 37 radio frequencies to coordinate 21 aircraft, an incredible feat while flying your own aircraft over a firefight. The guys on the ground took notice.

“There were a lot of close calls. It was a mix of skill and luck that we’re still alive,” Cenna said in a 2013 article. “As aircraft were flying over, the brass [from the rounds they were firing] was landing right next to us. It was raining brass.”

It may surprise some readers to hear that A-10 pilots also serve as impromptu airborne air traffic controllers, but it happens with some regularity. Three years after this mission, Air Force Lt. Col. John “Karl” Marks had to use every trick in the book to keep crowded airspace in line while saving an Army Special Forces team from a Taliban attack in Afghanistan’s Kunar Valley.

“That mission was unique just in the magnitude of the amount of things I had to use that I’d learned over many years of training,” said Marks, who, like Hilkert, is currently a member of the 303rd Fighter Squadron. “My wingman afterwards said he was just trying to hang on, like ‘I don’t know how you did that.’”

The same praise could be applied to Hilkert that day in 2011. While a four-ship of Pave Hawk and Apache helicopters moved in to evacuate the wounded quick reaction force soldiers, the A-10 pilot routinely used his airplane to draw enemy fire away from the helicopters. Keep in mind that Hilkert was doing this after nearly 10 hours in the cockpit already.

“Reflecting back on it, I can only imagine how Vago must have felt after likely consuming 3,000-plus calories of seafood and beef, and then carrying 10 Rip-Its in his flight suit out of the chow hall, back to the expeditionary fighter squadron, and then going and flying a 10-and-a-half hour sortie,” Mitchell said.

But Hilkert would not see the mission all the way through: at some point during the rescue, four day-shift A-10s came in to replace the original Sandy 1 flight. Pedro 84 then managed to hoist up the fallen Kiowa pilot with a dramatic 180-foot hoist: which is a much higher height than usual. Kline and Cenna followed the soldier into the Pave Hawk, finally ending the intense mission.

“It’s bittersweet,” Hilkert said about receiving the DFC. “I’m honored to be amongst a group of heroes that did their best with a bad situation. Several people lost their lives during this mission, so it wasn’t all high-fives when we got home. We flew back to Kandahar in silence.”

High-fives or no, Hilkert and his buddies continued a long tradition of A-10s saving the day for ground troops at their most desperate hour.

“What they did that night is truly amazing,” said Brig. Gen. Mike Schultz, the 442d Fighter Wing commander, who was the director of operations on shift that night for the 74th Expeditionary Fighter Squadron. “Truly outstanding. And those guys deserve to stand with any single Sandy that has ever been or ever will be because of the actions they did that night.”