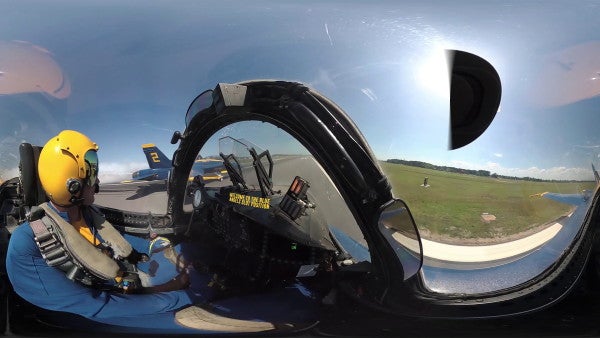 The Navy confirmed on Thursday that the canopy of Blue Angel 3, flown by Lt. James Cox, “made momentary contact” with the underside of the outer wing of Blue Angel 1, piloted by Blue Angel commander Capt. Eric Doyle, Navy spokeswoman Lt. Michelle Tucker told the News Journal.

The aircraft were practicing the Diamond 360 maneuver at the time of the incident, Tucker said. Nobody was injured in the incident.

Doyle called for an immediate safety standdown in the aftermath of the incident, which is standard protocol, Tucker
told Mllitary.com.

Although an initial damage assessment the two F/A-18 Super Hornet jets revealed just a “minimal scratch” on the canopy of Blue Angel 3,
according to the News Journal, the two aircraft will not participate in the squadron's upcoming performance at the Chicago Air and Water Show this weekend

“Capt. Doyle is confident in the abilities of his pilots,” Tucker
told Military.com in a statement. “The team trains diligently to operate in the safest possible manner, and they select only the best naval aviators and support personnel to fill their ranks.”