The Civil War’s Latest Casualty: This Reenactor Who Shot Himself With A Minie Ball 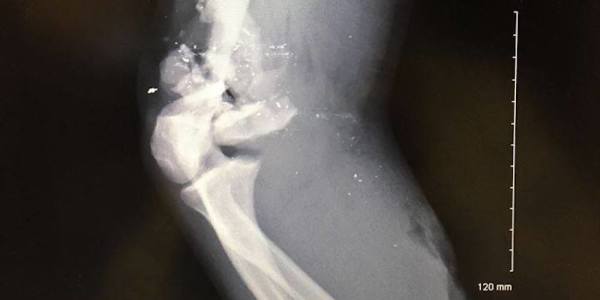 A member of the Society for Military History passes along this x-ray. It shows where a .58 caliber Minie ball hit a guy just above the elbow.

The story is that a Civil War reenactor was out hunting with his replica weapon. He slipped and shot himself in the arm. He applied a tourniquet and walked out of the woods.

A x-ray of the elbow of a Civil War reenactor with a .58 caliber Minie ball embedded withinDavid Welch/Society of Military History

David Welch, the member of the society, comments: “ I thought people might appreciate this rare glimpse into the damage that Civil War weapons could bring on the soldiers' bodies. As you can see from the images, if it were not for modern medicine and many titanium screws and plates, he would have lost his arm — amputation that would have been necessary above the elbow.”

The .58 caliber Minie ball removed from the elbow of a Civil War reenactorDavid Welch/Society of Military History

Thanks to Mr. Welch for obtaining permission for me to use the x-ray photo here.