Dunford: ISIS And Al-Qaeda Will Rise Again If We Get Complacent 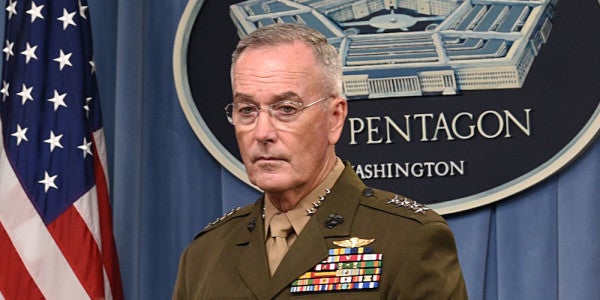 The security threat from violent extremist groups has not been eliminated despite a recent shift in Washington's focus to what it sees as growing threats from China, Russia, and Iran, the top U.S. military officer has warned.

General Joseph Dunford, chairman of the Joint Chiefs of Staff, told a conference of more than 80 international defense chiefs in Washington on October 16 that any easing of military pressure on al-Qaeda and ISIS will only give them time to reconstitute.

The number and severity of terrorist attacks in the West by those groups has declined in recent years as has the territory they control in Iraq, Syria, Afghanistan, and other host countries.

But Dunford said the underlying social and political conditions that have spawned allegiance to such groups has not changed, and the groups are adapting to their defeats on the battleground by using the Internet and other technologies to inspire attacks from remote hiding locations.

“Little progress has been made in addressing the underlying conditions that lead to violent extremism,” he said, without elaborating.

“Perhaps the greatest challenge facing us today is the danger of complacency,” he said. “A misreading of our progress to date and a misunderstanding of the character of the threat may cause political leaders to lose focus on violent extremism while they turn to other pressing challenges.”

He said governments must continue to work together to improve military, intelligence, and law enforcement cooperation to counter extremism, while also finding ways to curb extremists' use of cyberspace to recruit followers and inspire them to attack.

Dunford also issued a call for assistance in dealing with a large number of foreign fighters for ISIS that have been detained by U.S.-allied forces in Syria — a group he said could become a source of future threats.

There are now about 700 detainees from more than 40 countries, but only a few dozen have been returned to their home countries, he said.

Related: Trump Boasts That ‘ISIS Is Defeated.’ The Pentagon Says: Not Quite Yet »

“The progress in returning these fighters home for prosecution has been delayed by political considerations and inconsistent legal frameworks,” he said. “We need to find a way to address this challenge and prevent these detainees from becoming the leaders of tomorrow's extremist organizations.”

Defense Secretary James Mattis has also urged reluctant allies to take responsibility for captured citizens. So far, however, there has been little progress.

Dunford said that none of the defense chiefs he met with on October 16 committed to doing something about the problem.

Brett McGurk, the special U.S. presidential envoy for the global coalition to defeat IS, said the coalition, for now, is making sure the foreign fighters are housed in a way that does not allow them to commingle and fuel future threats.

Dunford's call to keep counterterrorism at the forefront comes as Washington and other Western governments this year have turned their attention to what they see as Russia's increasing aggression, China's expanding military, the nuclear threat from North Korea, and Iran's involvement in Middle Eastern conflicts, among other priorities.

A new U.S. national defense strategy unveiled in January elevated great power competition — mainly countering China and Russia — to the top of the U.S. military's priorities, in the process downgrading the threat from terrorism.