Americans were promised an ‘orderly and safe’ withdrawal from Afghanistan. US troops say it was anything but 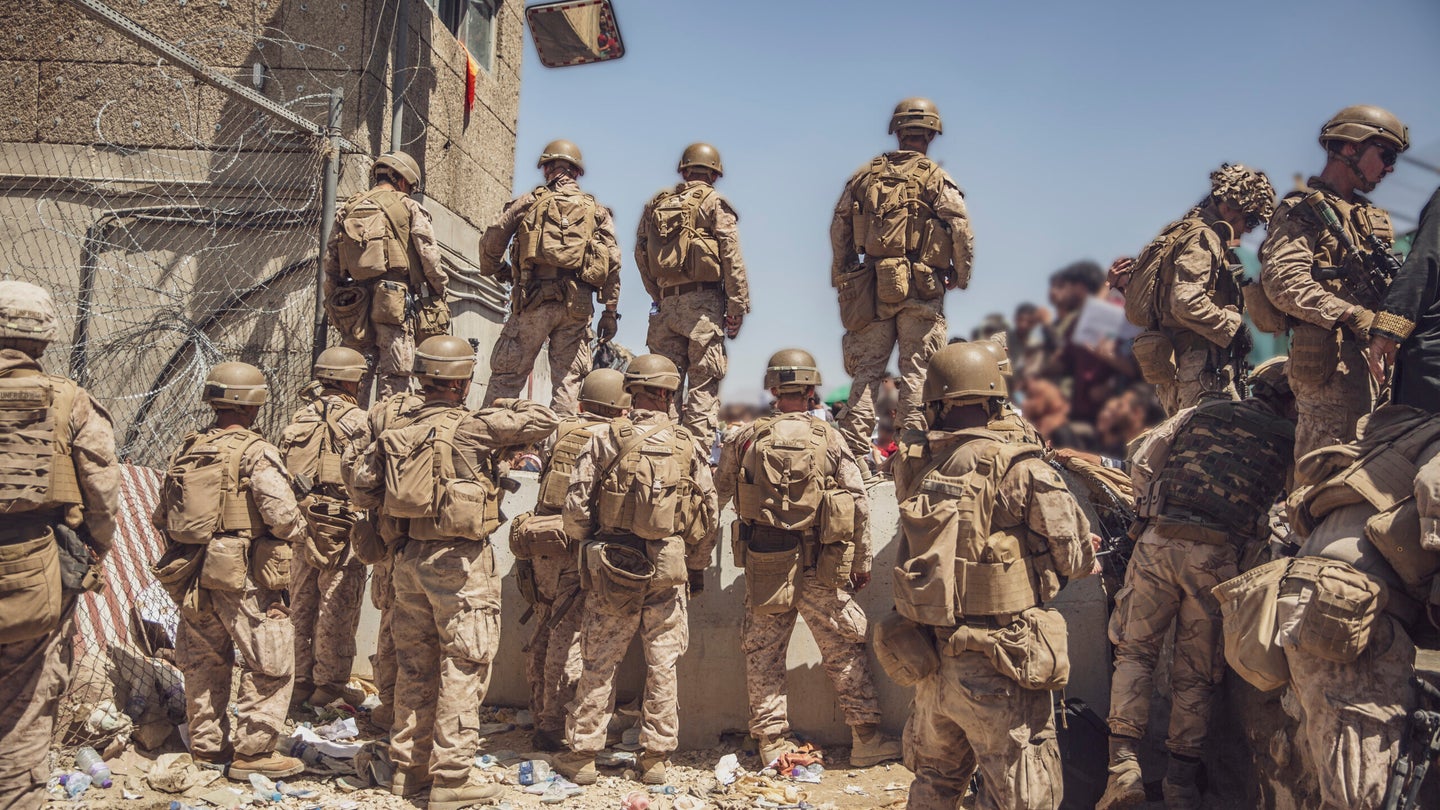 President Joe Biden assured the nation in April that the nearly 20-year-old Afghanistan war would come to an end with ​​“an orderly and safe drawdown of U.S. personnel,” but when Kabul fell just four months later, U.S. troops rushed to the capital to save as many Americans and Afghans as possible from the sweeping advance of the Taliban.

When the U.S. government decided to hand over Bagram Airfield to the Afghan security forces in July, that left Hamid Karzai International Airport as the only escape route for American civilians as well as Afghans who had worked with the American government and their families.

From a security standpoint, the airport was “not very good” as the primary location to launch the massive evacuation, a member of the 24th Marine Expeditionary Unit told investigators, adding that those security concerns could have been addressed had the evacuation started earlier.

But the first Afghan interpreters being flown out of Afghanistan did not arrive in the United States until late July and the Pentagon announced it was deploying more troops to Kabul just two days before the capital city fell to the Taliban.

For the U.S. troops guarding Hamid Karzai International Airport, one truth was inescapable: They had been dropped into a dangerous, chaotic environment that put them at high risk, and their government was abandoning most of the Afghans who had fought alongside the United States for the past two decades. They did their best to rescue those who were lucky enough to have the right paperwork and get past Taliban security checkpoints while knowing that terrorists would not pass up the opportunity to attack such a large concentration of American service members and civilians.

That is exactly what happened when a suicide bomber killed 13 service members and as many as 170 Afghans at the airport’s Abbey Gate on Aug. 26. Several Marines later provided investigators with visceral accounts of the chaos at Abbey Gate in the hours leading up to the attack. They recalled how Marines had to struggle to hold back the surging crowd while keeping a sharp eye for possible suicide bombers.

The Marines’ names were redacted from the U.S. Central Command investigation into the attack. The investigation was first reported on by Dan Lamothe and Alex Horton of the Washington Post.

“The crowd there was crushing women and children up against the barricade, crushing them against it hard enough to hurt at a minimum and possibly kill people,” said one of the Marines, who was asked to set up a loudspeaker at the scene to implore people to stop. He was ordered to be so loud “as to be painful enough to make them stop that way.”

On the day of the attack, a psychological operations team at Abbey Gate had been playing a message over a loudspeaker telling Afghans to go home if they did not have the appropriate paperwork to get into the airport, but to no avail, the Marine said as part of the investigation, which has been posted online.  Even when a local Afghan man implored the crowd to “stop pushing” and said, “You are hurting women and children,” the mass of humanity continued to surge forward.

The U.S. troops at Abbey Gate also knew to look for anyone who might be wearing a suicide vest, the Marine said. Over the course of three hours, Marines spotted more than 10 people who aroused suspicion because they wore bulky clothing, wore bags, or gave the crowd a wide berth as if they knew something was about to happen.

“However, even with the best spotting, once someone got into the main press of the crowd (closer to the final wadi bridge, the close packed barricade on our side of the wadi, or the end of the wadi itself, from which Marines were pulling out folks with appropriate paperwork) there was simply no way to keep track of them,” the Marine said. “The crowd was too dense, too rowdy, and all clambering to get in.”

The overall investigation, nearly 2,000 pages in length, included other candid interviews with the troops on the ground, who understood just how vulnerable they were at Abbey Gate and yet their superiors decided to keep the gate open.

“If you had been there, you would have seen that an attack was coming,”  said 82nd Airborne Division Command Sgt. Maj. David R. Pitt. “It wasn’t imminent, but it was a high probability.”

But the situation that Marines were put in, and where they were put, prevented them from taking certain precautions that been standard fare during the last 20 years of war in Afghanistan. At Abbey Gate, for example, the Marines did not place additional barriers because they had to be close enough to the crowd to identify and pull people out, Lt. Gen. Ronald Clark, commander of United States Army Central, told reporters on Feb. 4.

“They had to have access to the crowd and they had to have close personal contact with those that they were trying to move to approach a location to get processed,” Clark said at a Pentagon news briefing.

It also meant that U.S. troops became caught up in the bedlam. Another Marine, who was assigned to a force protection team, was at Abbey Gate that day looking for a man with an American passport. The scene was so chaotic that members of the 2nd Battalion, 1st Marine Regiment were “hand to hand fighting the crowd to push them off the barrier and stop civilians from getting trampled,” he said afterward.

“In the chaotic crowd, I picked out a 1 to 2-year-old girl in a red dress with blue eyes and her mother desperate to escape being trampled or crushed,” the Marine said.

He kept his eyes on the girl, but she repeatedly disappeared into the mass of people, lost in the sea of humanity. So he waded in after her. As he did, he handed off his can of OC spray to a Marine captain who was fighting with the crowd.

Things quickly got worse, he recounted to investigators:

“A Marine pulled the pin and detonated a flash-bang right in front of me on accident, blowing off pieces of his hand,” he said. “I looked down to check to see if I was okay and if I could still hear. The 2/1 Marines carried the injured Marine on their back to safety. I couldn’t leave the little girl in the red dress and the mother, so I went back to the barrier to see if they were still there. They were still in the crowd and were able to make their way to the 2/1 jersey barrier. The Marines pulled the mother and girl over and handed the girl to me, who I carried in my arms. The mother followed behind [REDACTED] panicking.”

The girl’s mother wanted to go back into the crowd to find her husband, but she and the child were taken to the airport’s passenger terminal. But there was no letup for the U.S. troops.

The Marine later took part in a rescue of a woman and eight members of her family who were unable to get past a Taliban checkpoint. Thankfully, the woman had a purple umbrella, making her easy to pick out from the crowd, at which point they got the family to the passenger terminal and returned to the gate to search for the man with the U.S. passport.

At 5:36 p.m., a suicide bomber detonated 20 pounds of military-grade explosives. The device used ball bearings as shrapnel to kill and wound the troops and civilians at Abbey Gate.

When he reached the gate, the Marine saw bodies on the ground, he told investigators. Grabbing a wounded Afghan girl, he put her on his back and ran to the triage point.

“I set her down behind cover of a vehicle,” he said. “A mother and her two daughters were in shock standing next to where I sat down the girl. I ran up to them and turned them around, directing them towards the inner Abby Gate controlled by 2/1.”

Then the Marine loaded one of his wounded comrades into a truck and they all drove to safety. All three were in a lot of pain, but the only thing anyone could do was talk to them so they would stay awake. The Marine rubbed the sternum of one of the wounded girls as she slipped in and out of consciousness.

They drove as fast as they could, screaming at Marines to get out of their way, and dropped the wounded off at a hospital.

The statements don’t mention what happened to the injured children, to the Afghan man who had urged the crowd to stop pushing, or to the little girl in the red dress and her mother.

Their lives were impacted by a series of catastrophic events beyond their control, like those of the 13 American service members killed at Abbey Gate. It was all part of the terrible finale to a war whose end was anything but safe and orderly.