In The Midst Of Present-Day Political Fighting, Remember How This Nation Started

It has been a standard trope for at least the last decade that the country has never been more divided... 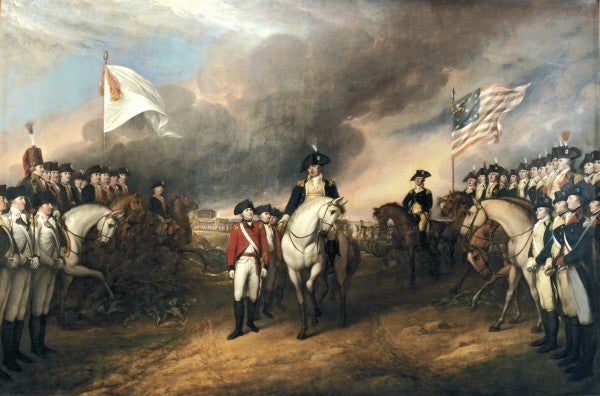 It has been a standard trope for at least the last decade that the country has never been more divided against itself. A recent Pew poll showed Republicans and Democrats more ideologically divided than ever before. Government shutdowns and legislative gridlock seem to inspire the notion that we are splitting apart as a nation, and that our differences will ultimately put our best days behind us.

It is hard to argue that our nation’s political scene has grown ever more bitter and partisan in recent times, but to say it is as bad or worse than any point in our history is at best ingenuous and at worst a farce. For examples, we can look to the opening period of our history, from 1776 to the election of 1800.

A shiny halo exists around the American Revolution in many people’s minds, as a time when 13 disparate colonies united as one and defeated the greatest power on Earth with little more than patriotic zeal and French gunpowder. The fact was, however, that divisions between the colonies almost killed the revolution before it could get off the ground, and continued to bedevil it until the war’s end. This was followed by 17 years of gridlock and strife that nearly tore the country apart in its cradle.

Supply and manpower problems during the revolution

In his book “Washington: A Life,” historian Ron Chernow wrote,

Seldom in history has a general been handicapped by such constantly crippling conditions … [Washington] repeatedly had to exhort Congress and the thirteen states to remedy desperate shortages of men, shoes, shirts, blankets, and gunpowder. This meant dealing with selfish, apathetic states and bureaucratic incompetence in Congress. He labored under a terrible strain that would have destroyed a lesser man.

In order to defeat the British Empire, the colonies had to marshal every resource they could muster. This however, was never achieved. Even in the face of execution for treason, Congress could not act decisively on supply matters, running from crisis to crisis with temporary expedients. Gen. George Washington was routinely forced to plead with individual states and localities to supply what was supposedly a national army, and was routinely met apathy and outright derision.

While Washington’s army was often starving, local farmers regularly sold their produce to the British, since hyperinflation had made the national currency worthless. A coordinated taxation and supply system across the colonies proved impossible due to state and congressional intransigence.

Shipments of food would routinely arrive so late and spoiled that it was unusable, and Washington often couldn't even pay the teamsters. Basic items like gunpowder were in such short supply that during the Boston Campaign, Washington complained, “We are obliged to submit to an almost daily cannonade without returning a shot from our scarcity of powder.”

Even on the verge of decisive victory at Yorktown, the Continental Army was on the brink of total collapse. Only with a huge emergency donation of 6,000,000 livres from the French did the army hold together long enough to end the war. None of this would have been necessary if Congress had been able to unite and do what was needed to fund the army. Instead, its members and the states more often stuck by their own narrow, petty interests and fears of centralized power, and the revolution nearly failed because of it.

This was to have far-reaching consequences. Many regular officers held bitter memories of the extremes that the army was forced into due to congressional incompetence, and they feared that the future held nothing but more of the same. This led to the Newburgh Conspiracy in 1783, the closest the nation ever came to a military coup. Only quick intervention by Washington among the men who admired him most stopped it in its tracks.

If we think our partisan politics are playing hardball, they are a pale shadow compared to the backbiting, accusations, and borderline treasonous actions that took place in the run up to the election of 1800.

Despite the founding fathers’ public aversion to political parties, John Adams and Thomas Jefferson found themselves as the heads of two deeply divided parties. The Federalists under Adams demanded war with France due to naval disputes, while Jefferson’s Democratic-Republicans were staunchly pro-French and saw Adams’ goals for a strong navy and good relations with Britain to be a betrayal to the revolution.

The deep personal rivalry between the two former friends was exacerbated by Jefferson actively undermining Adams first term despite being his vice president. Both sides deployed partisan newspapers to flay each other in the most outrageous terms. One newspaper warned if Jefferson was president, “Murder, robbery, rape, adultery, and incest will be openly taught and practiced, the air will be rent with the cries of the distressed, the soil will be soaked with blood, and the nation black with crimes.”

Jefferson’s pet papers responded that Adams was in secret negotiations to marry his son to a daughter of King George III and start an American dynasty. The more outrageous versions had Washington himself in full-dress uniform holding his sword to Adams’ throat until he renounced the scheme. It was partisan falsehoods such as these that led to the detested Alien and Sedition Acts, which outlawed criticism of the federal government.

Jefferson won the election narrowly, and ended up serving two terms with partisan politics almost as bad as the kind he had inflicted on Adams, with similar whipsawing public opinion over relations with Britain and France. Without a doubt, the election of 1800 was the most bruising ever to take place in American history

Whenever somebody bemoans the state of the union, and how America is no longer united as it once was, it is worth remembering that our current troubles pale in significance compared to what the nation has endured before. We have suffered revolution, our capital being burned to the ground, and a civil war that left nearly a million dead and half the country in ruins. This July 4th lets agree that our disagreements, however important they seem at the time, are just another tempest in a very old tea pot.