Carrying the weight: The undue burdens that female troops endure every day

In the fight against sexism, we have to acknowledge the additional burdens women carry. 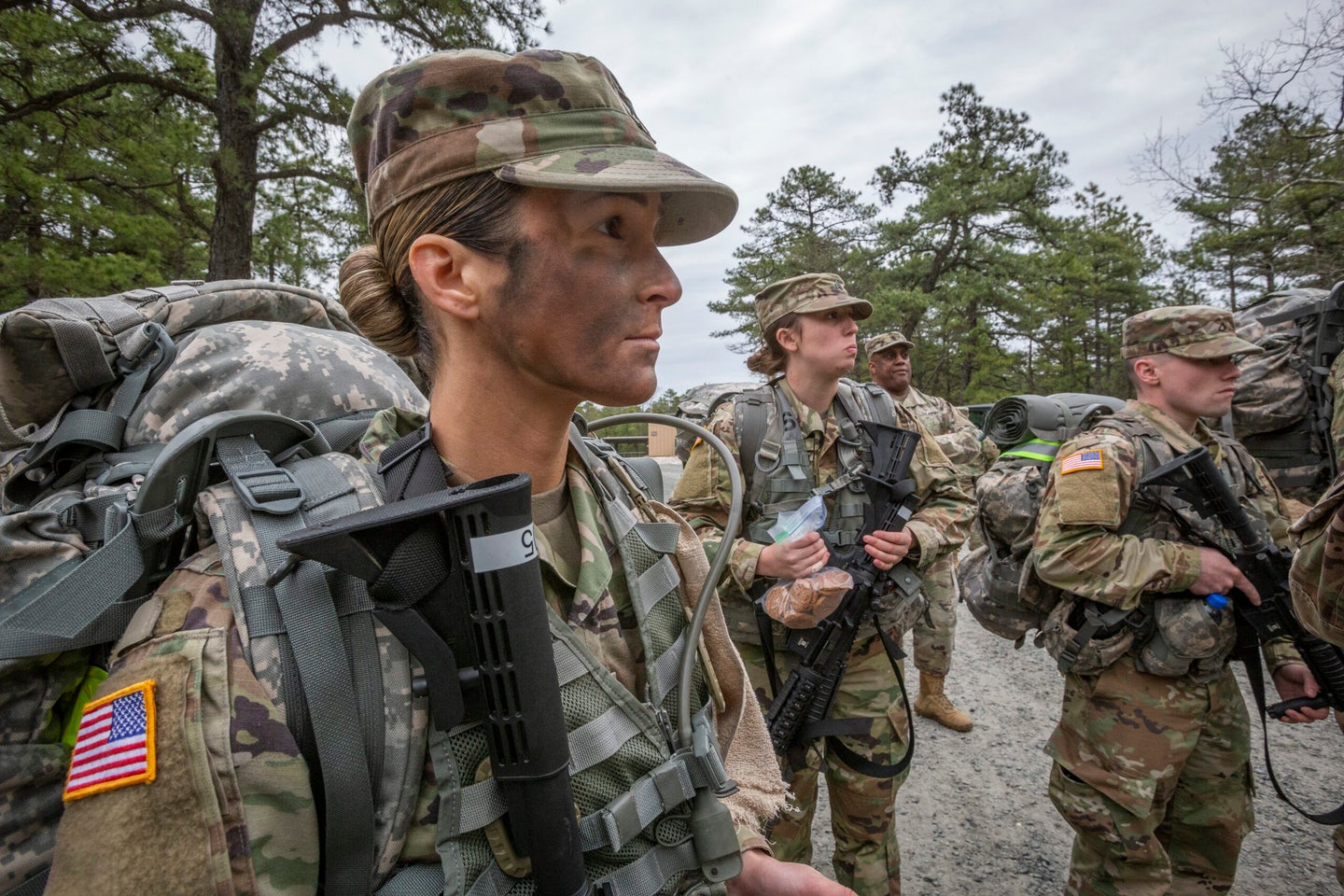 Across the Army, from Ranger School to Air Assault to Basic Training and countless other events, the 12-mile ruck march is everywhere. I’ve done numerous 12 milers, and none of them have been particularly enjoyable. The standard Army weight, 35 pounds without water, is just heavy enough to be cumbersome after three hours. Add 15-20 pounds of water, and the load becomes painful. Back when I went to Ranger School, I was apprehensive for the 12-mile ruck march after standing on my feet all week. The ruck itself weighed between 35-40 pounds, and I carried 9 quarts (about 19 pounds) of water on top of that. At about the 8-mile mark, I felt someone catching up to me on my left side. As I looked over, I saw something which didn’t immediately register to my tired brain; someone had their rucksack front-loaded, or on their chest, arms wrapped around it in a big bear hug. As they got closer, I asked what was going on.

“My straps broke at mile four,” she said, “and I didn’t want to waste time fixing it.” That’s all I managed to hear before she ran ahead of me.

I think about that woman from time to time. I never saw her again, but it was impressive that she completed the ruck march at all, and humbling that she did it faster than me. I know that she had to work much harder for the same result. And even though the Army thinks of itself as a meritocracy in which outcomes are correlated with effort, I think this one woman’s experience would resonate in places far beyond Fort Benning, Georgia. The Army often places undue burdens on women and then acts surprised when they are disproportionately affected by its policies. Each one of these institutional slights adds weight to the minds of women in our Armed Forces, weight their male counterparts don’t have to carry.

For instance, in Europe, one of the only American OBGYNs is located at Landstuhl Regional Medical Center in western Germany. I was stationed about four hours away from there, and many other Soldiers are stationed much farther. If a Soldier or family member needs to visit an OBGYN, her choices are either to miss an entire day of work and spend 100 dollars on gas or to visit a German physician. Obviously, someone might prefer a physician who speaks her language for a personal medical appointment. For patients with medical emergencies, or even for a routine exam, the Army provides them with two bad options and forces them to choose. The weight placed on women faced with this decision might not seem like much, yet it adds to the weight they carry with them from day to day. That standard 35-pound rucksack might weigh 38 pounds now.

There are many other Army policies that continue to add weight to these metaphorical rucksacks. Another example: single mothers are essentially forced to leave the Army if they are stationed in Europe, since they rarely are able to designate a guardian for their child in the event they deploy. Currently, merely having a child is not grounds for compassionate reassignment to another duty station, where a Soldier might rely on her parents or other family members to care for her child, and so she is forced to resign. The man who fathered the child is not faced with the same situation. 38 pounds is now 40.

These are just two situations that are commonplace in the Army that disproportionately affect women, but the culture that male Soldiers perpetuate can truly be back-breaking. Many Soldiers might not realize how damaging a daily diet of microaggressions can be; I know many men I have talked to certainly do not. But when my friend was asked in a meeting if the “curtains matched the drapes,” she was handed a burden for which she never asked. Same for the woman whose sexual harassment report was swept under the rug by her battalion commander. Ditto for the one who wasn’t given access to a female restroom for months, or the one who was asked out on a date in her final counseling with her commander, or the one who was told her skirt was unprofessional at her promotion board. And I don’t even have to mention the female officers who stress about what civilian clothes to wear on post that won’t draw looks, the female Soldiers who don’t feel safe in the barracks, the female NCOs whose authority isn’t respected. The service members who are blamed for being pregnant or called “aggressive” in meetings. 40 pounds. 42 pounds. 44 pounds. 46 pounds.

Or the woman sexually assaulted by her S3. 48 pounds. The women who watch their assailants walk free. 50 pounds. The woman who was killed in her unit’s Arms Room. The burden gets heavier and heavier.

Once viewed in this light, many supposed successes become much less legitimate. If someone completed the 12-miler at Ranger School with a 15-pound ruck, he would be dropped from the course, yet men can be promoted to higher and higher ranks while dealing with much less than their female counterparts. If a man has a figurative 15 or 20-pound advantage every time he competes for an opportunity, then the system looks less like a meritocracy and more like exploitation. So, men, we must ask ourselves, what advantages have we received that others have not? What do we enjoy at the expense of someone else? Is the Army truly a meritocracy, and are we truly the most meritorious, or are we just permitted the freedom to work towards our goals unencumbered by misogyny, prejudice, and, at the most extreme, the specter of violence?

To its credit, the Army has slowly started to realize its responsibility to equalize this load. Secretary Austin established an Independent Review Committee to investigate the culture in the military related to sexual assault and sexism, and Congress just came to an agreement to move sexual assault cases outside of the military chain of command. The Army recently changed its regulations concerning the appearance and wear of the military uniform, allowing women more flexibility in hairstyles, the opportunity to wear earrings in uniform, and to (modestly) paint their nails. Reports revealed that some female Soldiers must spend up to ten times more money on uniform items than men, a fact that women have long understood but most men have never even considered. Sergeant Major of the Army Grinston, the Army’s highest enlisted leader, now turns to social media to shut down sexism. There was even an outpouring of support for pregnant Soldiers from leaders across the military in response to a statement from Tucker Carlson.

Yet the Army still has a long way to go to make things more fair and equitable for all of its service members. Lip service that claims to support pregnant women, for example, is meaningless when pregnant women still face discriminatory policies. Committees and studies are important, but they are ultimately useless unless they provide meaningful and timely policy change. Men who make or overlook sexist comments contribute to a culture that demands more of women than it does of men. And as long as a portion of the force is overloaded and ignored, the military will never be the meritocracy the American people need it to be.

Robert Moser is currently a platoon leader in the 75th Ranger Regiment.