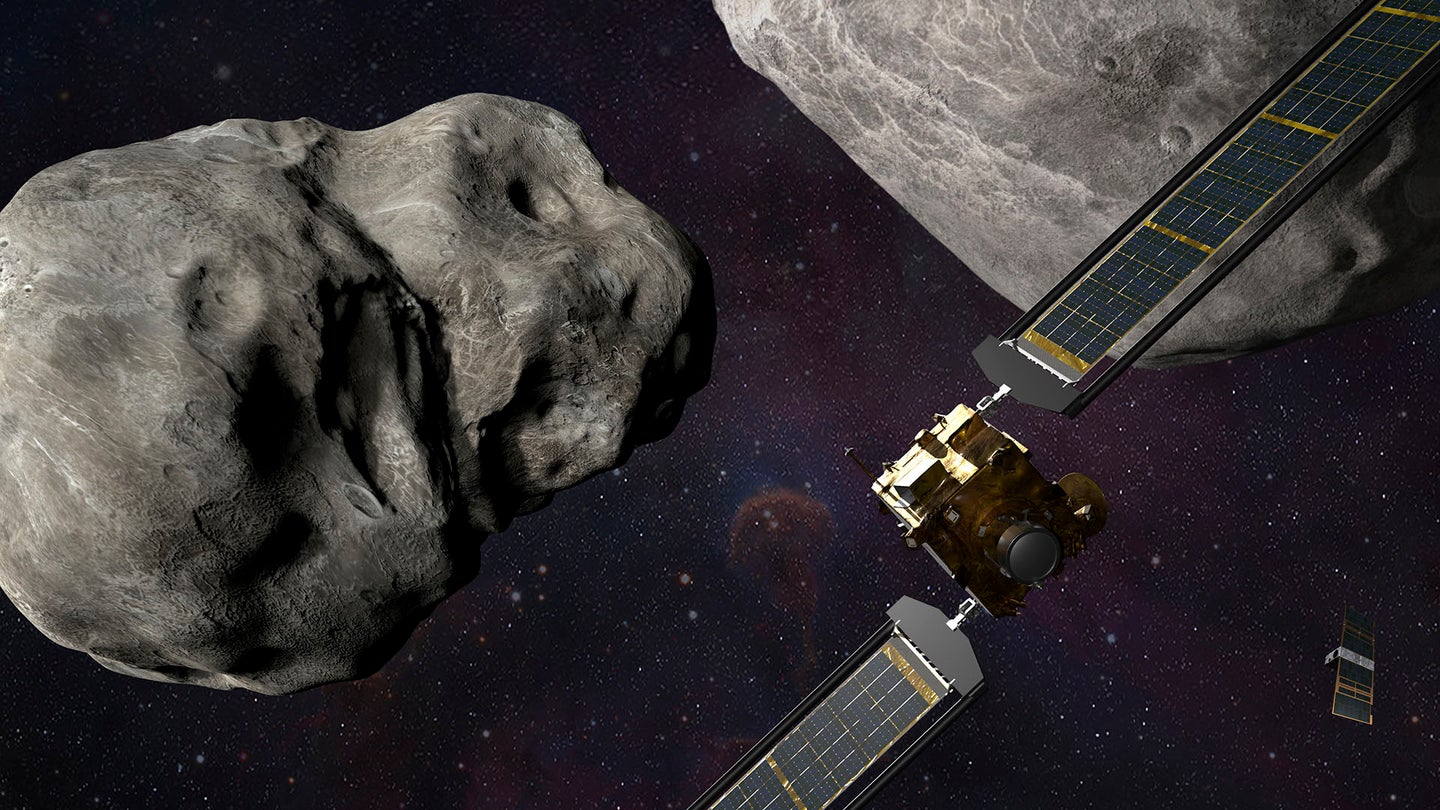 If Hollywood has taught us nothing else, it’s that we could always count on the A-listers to save us from a gigantic asteroid or meteor headed towards Earth.

Millions of moviegoers rejoiced when Bruce Willis bravely sacrificed himself to destroy a meteor the size of Texas in Armageddon. And the dozens of people who saw Deep Impact that same year were probably also moved when Robert Duvall helped destroy a much smaller and less impressive comet (did the good guys in that movie outrun a frickin tsunami traveling at the speed of sound?).

But in real life, a relatively anonymous group of planetary defenders working at NASA are the ones responsible for saving the world from wayward celestial bodies.

On Monday, NASA’s Double Asteroid Redirection Test — or DART — spacecraft plowed into an asteroid as part of an evaluation to see if NASA can eventually find a way to change the orbit of meteors, comets, or other potentially hazardous objects that are on a collision course with our planet.

The asteroid that the DART craft collided with is not a danger to Earth. The Associated Press went as far as to describe the space rock as “harmless” — a term once used by The Hitchhiker’s Guide to the Galaxy in reference to Earth. It will likely take months to determine whether the impact had enough power to change the asteroid’s trajectory.

“Planetary Defense is a globally unifying effort that affects everyone living on Earth,” Thomas Zurbuchen, associate administrator for the Science Mission Directorate at NASA Headquarters, said in a news release on Monday. “Now we know we can aim a spacecraft with the precision needed to impact even a small body in space. Just a small change in its speed is all we need to make a significant difference in the path an asteroid travels.”

The DART mission is part of NASA’s planetary defense strategy, which is managed by the Planetary Defense Coordination Office. That office is in charge of detecting potentially hazardous objects, which are defined as celestial objects that are projected to travel within 4.7 million miles of Earth’s orbit and are greater than 500 feet in size.

The office also studies ways to mitigate such impacts and plays a lead role in coordinating how the U.S. government would plan to respond to an impact threat.

“They want the data on all human-made objects in space (satellites and space junk) and we want the data on all natural objects in space —- asteroids and comets,” Johnson told Task & Purpose on Tuesday. “As is the case for all naturally caused disasters, U.S. military forces would support the response efforts of U.S. civilian agencies, and also any efforts to mitigate those disasters.”

Unlike what has worked in the movies, blasting an asteroid or other dangerous celestial body to smithereens using nuclear weapons is not the default response for dealing with potentially hazardous objects, he said.

“Not unless we don’t find them headed toward Earth until the last few weeks,” Johnson said. “Our real strategy is to find any significant threat to Earth years, and possibly decades, before the potential impact. It is entirely possible to do this with the space imaging technology we have today. It just needs to be applied with the right space-based telescope. That way we can use more benign and less controversial ways, like demonstrated with DART, to nudge them into safe orbits many years before they are a threat to us here on Earth.”

At the moment, there are no known asteroids that have a chance of striking Earth within the next 100 years, according to NASA.

“The highest risk of impact for a known asteroid is a 1 in 714 chance of impact by an asteroid designated 2009 FD in 2185, meaning that the possibility that it could impact then is less than 0.2 percent,” according to NASA’s website on planetary defense.

But there are also a whole lot of near-Earth objects, which have the potential of threatening Earth one day. Near-Earth objects are asteroids or comets that are projected to travel within 30 million miles of Earth’s orbit, and they are at least 30-50 meters in size, meaning they could cause widespread damage if they hit us.

“At the start of 2019, the number of discovered near-Earth asteroids totaled more than 19,000,” according to NASA. “An average of 30 new discoveries are added each week. The 15,000 milestone, reached on October 13, 2016, marked a 50 percent increase in the number of known near-Earth asteroids since 2013, when discoveries reached 10,000 in August of that year. More than 95 percent of these objects were discovered by NASA-funded surveys (primarily using ground-based telescopes) since 1998, when NASA initially established its Near-Earth Object Observations Program and began tracking and cataloging them.”