You can thank the Army for National Donut Day 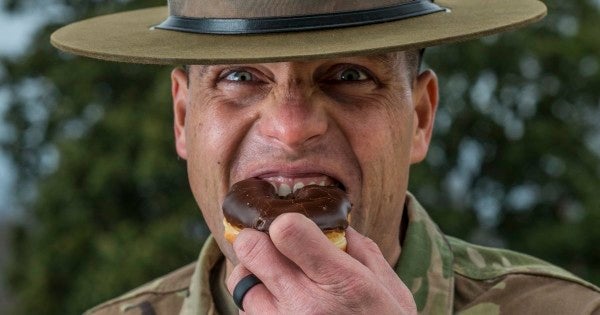 National Doughnut Day began in 1938 when the Chicago Salvation Army set out to honor a group of women known as “doughnut lassies.”

The lassies got their start in 1917 when Helen Purviance, an ensign in the Salvation Army, traveled to France to work with the 1st Army Division during World War I. She partnered up with another officer, Ensign Margaret Sheldon, and together they rolled crullers by hand to give to homesick soldiers.

According to book called “American Women in World War I,” Sheldon said she made at least 300 doughnuts in the course of one day. According to the Salvation Army, the sweet, doughy treat became so popular that eventually the lassies made anywhere from 2,500 to 9,000 doughnuts a day.

The yearning for doughnuts among soldiers persisted long after the war ended. Tales of treat made their way back to America, and in 1920, the first doughnut machine was invented in New York City by a man named Adolph Levitt.

The Salvation Army's impact was so great that the lassies reprised their role in serving donuts during World War II as well.

And doughnut fervor has yet to subside, as national chains like Honeydew, Dunkin' Donuts, and Krispy Kreme continue pushing out millions of delicious pastries in countless varieties year after year.

These chains even honor the lassies by offering free doughnuts nationwide on the first Friday every June.

See the history of the Salvation Army donut girls here:

See the history of the Salvation Army donut girls here.