Rejoice! The Pentagon Is Finally Ridding Itself Of The Horrendous Defense Travel System

The Department of Defense is finally going to replace the dreaded Defense Travel System service members currently use to book... 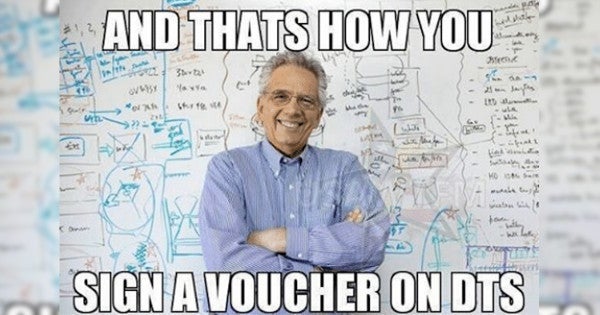 The Department of Defense is finally going to replace the dreaded Defense Travel System service members currently use to book travel and file for reimbursement of expenses.

DoD announced on August 16 that it had awarded a $9.3 million contract to SAP Concur to develop a travel system prototype “that will replace the aging and inefficient” DTS, according to a press release.

That’s a charitable way of putting it; just ask a service member who has used the system or take a look at the various joke memes that describe its inefficiency and you’ll really get a taste.

One meme, for example, shows a wife looking at her husband at a computer that reads, “Hasn’t come to bed in three days. Says he’s waiting for DTS to load.” Others feature a teacher in front of a chalkboard filled with writing, which sarcastically proclaims “that’s how you sign a voucher on DTS.”

While good news that DTS will get an upgrade, it won’t come any time soon. The release says the prototype is expected within two years. It did not mention when a final version would be due.

“We have a responsibility to ensure our resources are used in the most efficient and effective manner, and given this specific project has such a wide-ranging and deep impact – reforms with results like these are crucial,” said Pentagon Chief Management Officer John H. Gibson.