Today, Justice Was Done For Some American Heroes

President Barack Obama today awarded the nation’s highest award for valor, the Medal of Honor, to 24 veterans that were... 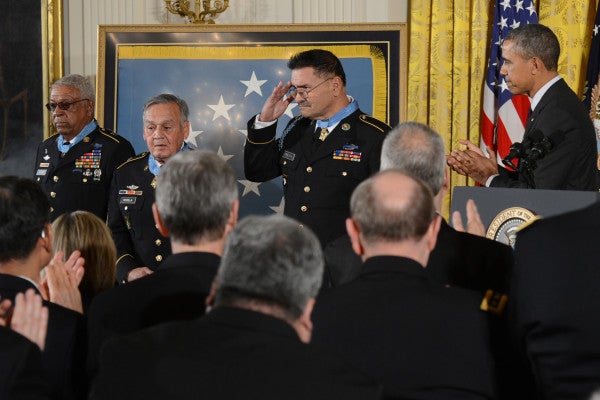 President Barack Obama today awarded the nation’s highest award for valor, the Medal of Honor, to 24 veterans that were determined by an independent panel to be deserving of the award, but were previously deprived due to prejudice.

Only three of them were on hand at the White House to receive the awards from the president, the others having perished during their act of gallantry, or died before the government could properly recognize their deeds.

Congress called for a review of records of Jewish American and Hispanic American troops from World War II, the Korean War and the Vietnam War to ensure those who had previously been awarded the Distinguished Service Cross were not unjustly deprived of the Medal of Honor.

But the investigation uncovered other men who it was determined should have received the award as well.

In all, 24 men were awarded the Medal of Honor today, but just three were alive to see it in person.

Here’s to these American heroes, who served and fought gallantly, but were victims to the history and politics of their respective eras, for finally getting the recognition they deserve.