Why hundreds of Americans are parachuting over Indonesia this month

It's the largest edition yet of the annual Garuda Shield exercise. 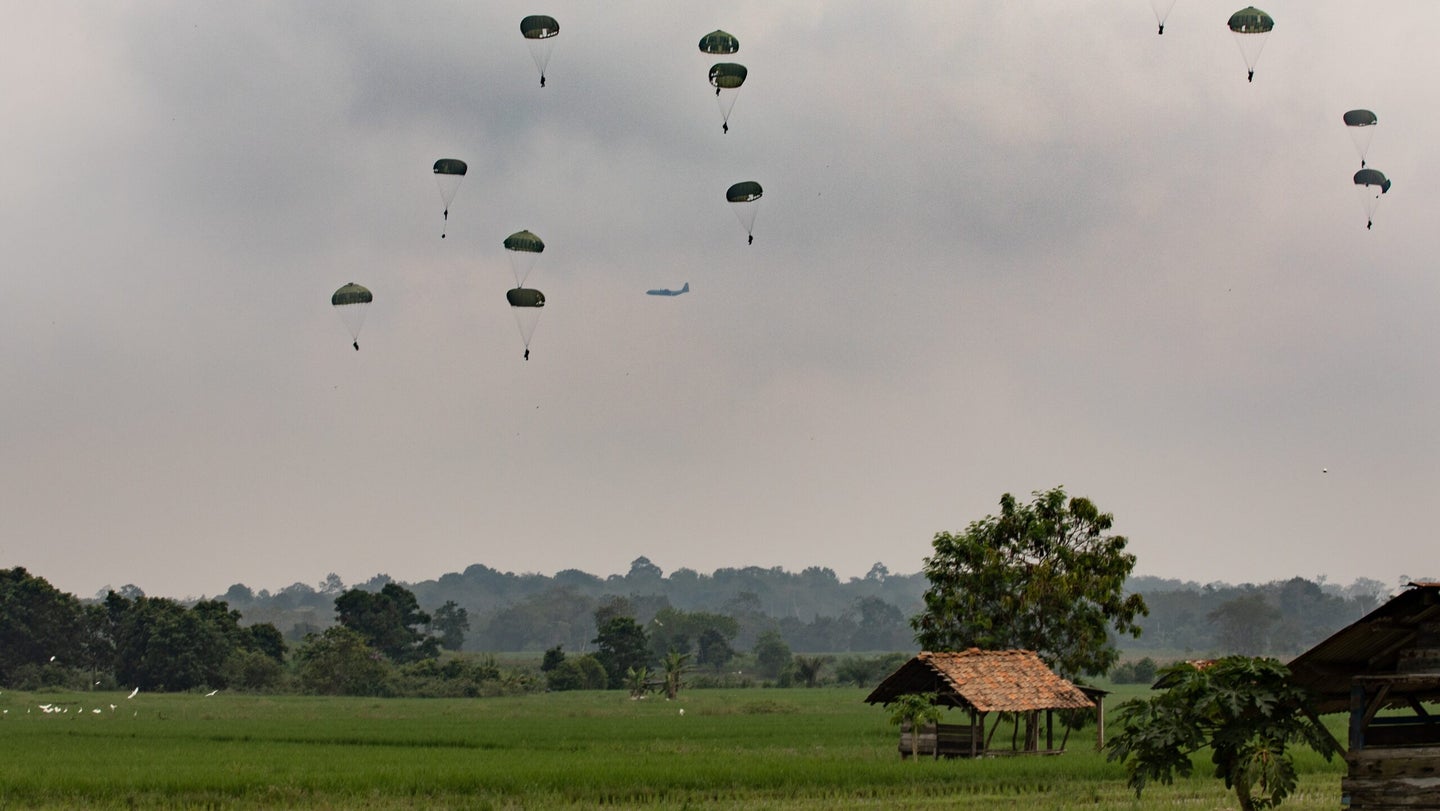 The United States and allied nations recently wrapped up the Rim of the Pacific joint naval exercise, but there is another multinational military training operation happening in the Pacific theater. U.S. Indo-Pacific Command forces are currently in Indonesia marching, training and jumping out of planes for the 2022 edition of the Garuda Shield operation. With soldiers from 14 nations participating or observing, it’s also the largest edition of the exercise since 2009.

The two-week exercise was held. It’s traditionally been a joint Indonesian-American operation, joined by various other nations over the years. Although not as attention grabbing as RIMPAC – with it featuring 26 nations and involving blowing up multiple ships – the 2022 Garuda Shield features thousands of soldiers; 2,000 of the participating soldiers are American, with another 2,000 from Indonesia. Other participating countries include Japan, Australia and Singapore, with other nations also sending observers. Many of the operations have been joint exercises by the U.S., Tentara Nasional Indonesia (the Indonesian military) and the Japanese Self-Defense Force; one of the firsts this year was a combined airborne jump and deployment over the Indonesian island of Sumatra. Due to the scale of the participating partners, the U.S. is calling this year’s exercise “Super Garuda Shield,” although not every partner is using that term.

Observer nations include South Korea, New Zealand, Malaysia and – although not in the Pacific – the United Kingdom and France.

Like the larger naval exercise, this was done in part as a show of strength and coordination against Chinese interests in the Pacific region. The operation was held while tensions escalated between China and Taiwan, which Beijing sees as part of its territory. A visit by Speaker of the House Nancy Pelosi to the island saw China speed up a planned military exercise, firing missiles over the island on Aug. 5. The U.S. has been working to strengthen ties and military preparedness with nations near China, such as Japan, over recent years. As with RIMPAC, participating countries did not explicitly name China as what the exercise was focused on, but Gen. Charles Flynn, head general of U.S. Army Pacific, hinted at it when Garuda Shield kicked off.

“Together as a multinational force, Garuda Shield is an important expression of our teamwork, our interoperability and our unity as a group of nations that seek to have a free and open Indo-Pacific and maintain a rules-based order,” Flynn said at the time.

Garuda Shield comprised a series of different operations. Along with the airborne jump, there were coordinated training exercises focused on urban warfare, airfield seizure and air defense. Although predominantly infantry focused, the exercise also features a naval component, with elements of the U.S. 7th Fleet participating. Those include destroyers, littoral combat ships and other vessels, for maritime as well as amphibious joint exercises. They lack the size and explosive demonstrations that RIMPAC had, but show a more combined-arms coordination.

The super-sized exercise wraps up on Sunday, Aug. 14.