The origins of the challenge coin have been lost to antiquity. It’s really anyone’s guess as to how these trinkets … Continued 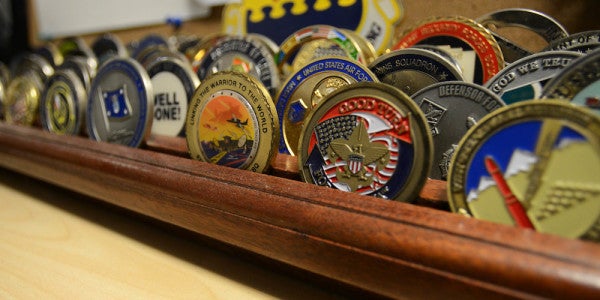 The origins of the challenge coin have been lost to antiquity. It’s really anyone’s guess as to how these trinkets came about.

But what isn’t a guess is that the number of coins being presented today IS TOO DAMN HIGH. Just like with real money, if you make too much of it, the value goes way down. The inflation rate for challenge coins is worse than Reichsmark in Weimar Germany, and we all know how great that worked out.

Some time ago, if you got a challenge coin from a commanding officer, people thought of it as something of a score. That was before coins became like Beanie Baby collectibles for the moto set. Grown men put them in display cases, apparently under the delusion that someone, anyone, gives a shit about their hobby. Just like Beanie Babies, no one cares which ones you have or how you got them.

That’s especially true now that everyone from cops to cabinet secretaries has coins. There are few things less cherished than coins from a civilian agency. Civilian coins are a tradition with about as much history and intellectual integrity as Milli Vanilli. “Oh, tell me about the fabled battle history of the Environmental Protection Agency, Mr. Secretary.”

A standard coin is now less valuable than a POG from an overseas PX. That’s why so many of them have started to incorporate customized shapes and functions, usually a bottle opener. You know what also works really well as a bottle opener? A bottle opener.

The other track is to make the coin exceptionally weighty and huge. Making an otherwise perfectly ordinary item ludicrously huge is, as in most things, compensating for other shortcomings. Witness the cavalcade of faux-gold monstrosities that are the challenge coins of the Trump administration.

It’s time to get a damn handle on the coin situation. There is no Federal Reserve to control the supply, so grassroots action needs to happen.

The history of the challenge coins dates back to World War II, when an American pilot was shot down and captured in Germany. His identity was proven and life saved when he revealed a bronze medallion, with his flying squadron emblem.

Since the military is what originally set the stage for “peak coin,” the military has to be the institution that kills it.

First, senior leaders need to get the hell over themselves. Unless you’re a general or an admiral, you don’t need a personal coin, and even then, think really hard about it. If you’re a civilian and your title doesn’t start with “Secretary of” and end with “Defense” or the name of a military branch, then just sit your ass down.

Second, if you are one of those senior leaders, don’t hand your coins out every time you come in contact with the common folk, like drunks at Mardi Gras throwing beads at topless women. A coin as an informal attaboy for something not quite award-worthy is a great thing. Giving them to every pilot or MRAP driver who drops your fat ass off at a FOB is just patronizing. Save them for something memorable. The recipient will probably still throw it in the trash, but at least try to keep up appearances and set the tone for subordinates.

Third, as a now civilian who sometimes works with the military, I’ve realized that corporations need to choose different trinkets than coins to hand out. Coins seem cool, but corporate coins are really only a pale imitation of a legitimate military tradition. Patches, t-shirts, branded condoms… Anything other than coins is a better corporate giveaway.

“If you’re a civilian and your title doesn’t start with 'Secretary of' and end with 'Defense' or the name of a military branch, then just sit your ass down.”

Any of those — perhaps especially the condoms — will get far better name recognition down the road than coins whose only purpose is to pad out peoples’ absurdly overdone coin display cases. Take those coins and give them to your children, cats, some US Presidents, or anyone else obsessed with worthless shiny objects.

Fourth, bring coins back to basics. Officers and NCOs should be going to their clubs with their actual unit coins and challenging people to produce theirs. That is the foundation and only real value of the coin tradition. Buying drinks for each other can help build group and unit cohesion. That’s the reason everyone is here in the first place. It’s what coins are for.

Lastly, I don’t endorse hazing. But, if anyone answers a challenge at a bar with a coin bought at the PX, all bets are off. I don’t even know what the business model is for selling coins that say “Second Lieutenant” or “Lance Corporal” on them, but I do know that both are clueless, lonely, and really, really sad.

Somewhere between apathy and obsession is the right attitude in any endeavor. Coins are no different. Save them for when they’re actually worth it, and everyone will be better off.