The Man-Portable Rocket Launcher That Could Destroy A City Block

Davy Crockett was a renowned frontier hero steeped in myth and legend, much of it probably based on tales invented... 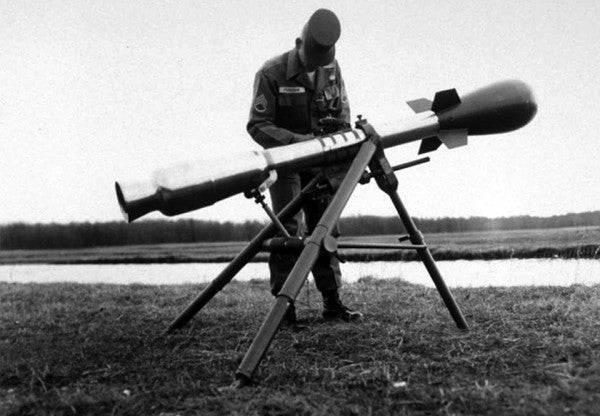 Davy Crockett was a renowned frontier hero steeped in myth and legend, much of it probably based on tales invented by himself. Supposedly Crockett was such a crack shot he could split a bullet on an axe blade using a musket.

The Cold War weapon that bore his name was many things, but dead accuracy wasn’t one of them. The M28/29 Davy Crockett Weapon System was a man-portable recoilless rifle that could fire a 76-pound W54 nuclear warhead up to two and half miles, and provided the terrible power of fission in a system that could be carried and operated by three men.

The simmering tensions between NATO and the Soviet Union led to huge numbers of nuclear weapons being built, enough to destroy most of the planet 20 times over. By 1967, the United States had a nuclear stockpile of 31,255 warheads, spread out among many types of weapons systems. It included thousands of so-called tactical nuclear weapons that were meant for general battlefield use, like the W48 155mm nuclear artillery shell or the AIR-2 Genie air-to-air missile.

Developed in the 1950s, the Davy Crockett was envisioned for use at the Fulda Gap, considered a prime invasion route for Soviet army divisions driving into West Germany and widely anticipated as where the first big battles of World War III would be fought.

Faced with overwhelming numbers of Soviet tanks, it was hoped weapons like the Crockett and the W48 shell could devastate large armored formations and keep the Soviet Union bottled up in the Fulda Gap. This even included nuclear landmines such as the Special Atomic Demolition Munition, which could also be used by Special Forces parachuting behind enemy lines to destroy key infrastructure.

By nuclear standards, the W54 warhead used by the Davy Crockett was tiny, with an explosive yield of .01-.02 kilotons, or the equivalent of 10 to 20 tons of TNT. By comparison, the bomb that was dropped on Hiroshima had a yield of 15 kilotons, or 15,000 tons of TNT, nearly a thousand times more powerful.

But though a shrimp compared to most nukes, the warhead still carried plenty of bang. The largest conventional bomb fielded by the U.S. military, the GBU-43/B Massive Ordnance Air Blast, or MOAB, weighs 22,600 pounds and has a blast yield of 11 tons of TNT. The Crockett could deliver double that with a bomb .3% of the mass.

The blast was powerful enough to collapse buildings and cause third-degree burns hundreds of feet away, but the real lethality of the weapon lay in its radiation effects, which could be fatal over a quarter of a mile away. Residual fallout would contaminate the area and make it dangerous for any exposed personnel to pass through, making it a potent barrier weapon.

But the Davy Crockett had a number of problems that seem obvious in retrospect. The weapon was highly inaccurate, often hundreds of feet off target, and its limited range made it highly probable that users could be exposed to radioactive fallout. Though designed primarily to engage Soviet tank formations, the slow setup and inaccuracy of the weapon made targeting fast-moving tanks problematic.

The fact that mass use of the weapon could contaminate huge areas of land for years to come also made it dubious as a defensive weapon, since it would effectively deny territory to either side. It would also create a huge risk of escalation that could lead to a world-destroying nuclear exchange between the United States and the Soviet Union.

With its many deficiencies in mind, and perhaps a glimpse of sanity among military planners, it was phased out of use by 1971 and not replaced.

The United States nuclear stockpile has declined from its horrifying height in 1967 to a little over 70,000 today. A little over 2,000 of those are actually deployed, with the rest being held in reserve or awaiting dismantlement.

We may be past the days where the military fielded nuclear weapons on the scale seen in Western Germany during the Cold War, and the nuclear forces of the U.S. are aging and suffering from a long period of neglect from the Pentagon. But it is worth remembering that nuclear weapons were once so prevalent it was thought necessary to turn them into an infantry weapon.