CGSC: A Howl Of Pain From The Lower Circle Of Online Distance Learning Hell 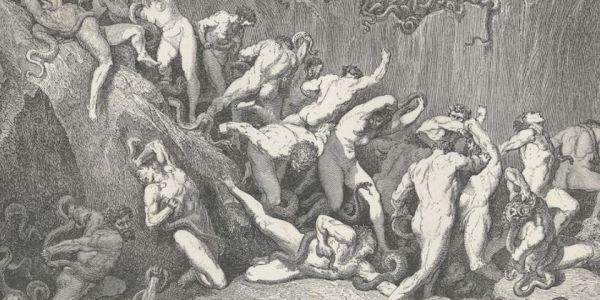 Upfront, I commend Maj. Jamie Schwandt on his courage and candor. I am neither as brave or foolish as he is as to reveal my identity. For Maj. Tom McIlwaine, I disagree that the Army needs unthinking worker bees. The Army needs inquisitive, thoughtful, creative leaders who can follow and do as they’re told. The two are not mutually exclusive.

It’s a long story, but please bear with me.

The issues I had completing ILE-CC DL started before I was ever enrolled in the program. AR 350-1 states that you can complete a non-resident sister-service program in lieu of ILE-CC if you get approval through DA G-3/5/7. So yes, this part isn’t really a knock on CGSC per se (we’ll get to that) but I think it’s still valuable to air this laundry.

Related: An Officer Grades The Army Staff College And Its Leadership »

The Army has two main ways to complete ILE-CC DL – online, a combination of two-week TDYs and drill weekends, or a combination thereof. The Marine Corps has a weekend version, a weeknight version, and an online version. The Navy has a weeknight version, an online version, and a DVD version. The Air Force has two online versions, one that offers a master's degree and one that doesn't. All those services also have their resident versions. Between those four services, that's over a dozen ways to complete the same requirement. This is the kind of thing that drives me up the wall when I see the DoD complain for more money in front of Congress.

Anyway, I decide I want to do the USMC weeknight version. It's 8 months a year for two years, basically like an evening college class. I know that modality will work well for me educationally. It's physically located between where I work and live and I've had generally positive training experiences with the USMC in the past. I write the USMC regional coordinator, he's totally on board, zero issues. I find someone at DA G-3/5/7. AR 350-1 says I need to submit a 4187 – so what information do you want on it? Who exactly do you want me to route it to / through? Do you want or need any attachments?

The first mid-level GS-12 civilian tells me that I shouldn't even be thinking about this because as a reservist, I need to go to an Army school to get more Army time with Army material. That's cool and all, man, but you're not a decision maker, this is supposed to be JOINT professional military education, whoever wrote AR 350-1 didn't seem to have that same concern, and I have 10 active Army years at this point, so if I need to put that justification on the 4187 or in the packet, let me know.

Related: In Defense Of CGSC: It Produces The Worker Bees Every Army Needs »

Between the stonewalling and a new boss who was hot to trot for ILE-DL, I decide to just eat it and do ILE-DL. I go to enroll … but I can't. Because even though I was DA select for O-4, I wasn't in an O-4 slot. The USMC, USN, and USAF didn't care when I asked them if I could attend their programs, I meet their eligibility, but the Army has an issue. So now I have to wait.

So, to recap: I found an equivalent program via a sister-service that was authorized by regulation, was willing to enroll me, that I wanted to take, when I wanted to take it, in a modality I would get the most out of–and I was being actively impeded by the Army from doing so.

Anyway, I finally enroll in the program. Doing so is needlessly difficult. I can't just enroll in all three phases, I have to go one at a time so I'm going to have to game it out or there's going to be a lull between phases. I have to fill out some ancillary documentation to get “admitted” for their accreditation or whatever. Fine. But wait, now there's some pre-requisite block of instruction I have to finish that wasn't previously advertised! And there are books, which I get to buy myself! This just keeps getting better and better.

Before I start, I ask my “advisor” what grade you need to be top 20% of the class and on the commandant's list. If I remember correctly, it was 99.85%. If 20% of your students are getting essentially perfect grades, that's a red flag that something's fishy. I finally get into the coursework and it becomes apparent how this is happening: there are tests and quizzes on Blackboard. You can take them three times each and only the highest score is recorded. You can see previous test results, the question bank is fairly limited, and all of the questions are highly google-able. So no wonder everyone's acing this thing. It's still not entirely clear to me how they actually tabulated your grades (contradictory guidance) but, for example, for phase 1 (of three phases) these nonsense tests are at least 37.5% of your grade.

Related: Are We Seeing The End Of History At The Army Command And General Staff College? »

The coursework is all self-guided. There's zero input, zero discussion with peers, and the only feedback you get are the comments (usually anonymous) that you get back on your graded work.

I submit my first assignment and get my (anonymous) feedback. It's riddled with misspellings and grammatical errors: “Ends or end state is a specific point in time and space. For example (twto words which did not appear in your paper) a functioning national government in Afghanistan.”

First, using the phrase “for example” was not a requirement, that's a bizarre complaint, and for what it's worth I did use “as an example” at one point. The context we're discussing here is a national strategy. Personally? I think that “ends” and “end state” are two wildly different things that don't even really bear mention in the same sentence except to talk about how they're not the same thing. Furthermore, I disagree that a functional government in Afghanistan is an end. It's a way. A national security “end” is the safety and security of the American people at home and abroad. A functional Afghan government is one way to achieve that, but it's certainly not the only way.

Now, you can disagree with that all you want. Either way, it would be an interesting and illuminating conversation to have, but I can't. Because this is DL, there's zero interaction with anyone else besides this anonymous maniac, and that's why this isn't graduate education. Graduate education is all about the seminar, the discussion, the give and take. There's none of it here.

“We live in the tactical world. While it is nice to know the strategy behind going on a foot patrol in Afghanistan, it does not affect day to day living there.”

Sort of ad hominem, kind of puzzling. Maybe too much ink has been spilled about the “tactical corporal,” but this line of thinking seems pretty antithetical to what this course is supposed to be accomplishing.

“While the news medial may consider Abu Ghraib as affecting the War in Iraq it really had little consequences other than to those who committed the crime. It had no strategic consequences.”

Very ad hominem — Abu Ghraib was nowhere in my paper or the course material. An odd broadside against “the news medial ” and, again, while maybe there's a discussion to be had here, this isn't really being posed as a thought experiment or contrary view, but more as guidance to “think small.”

Related: An Alternative Perspective of CGSC: A Letter To The Incoming Class of 2019 »

At the risk of making a mountain out of a molehill, this is the type of thinking that’s gotten us into bad spots all around the world. A fundamental misunderstanding of ends, ways, and means. A dogged desire to stick your head in the sand and insist that nothing strategic is going on here.

Anyway, I complain about the grading, but due to the grade, there's no re-grading available. Fine. Next paper comes up. Grading comes back.

“For example (two words which did not appear in your paper) […] In this case, you could have used either a real world example, like how the US should deal with North Korea”

So, while this is anonymous, clearly I've drawn the same guy out of whatever grading cesspool. And he’s just copy and pasting his favorite complaint. And not to quibble, but my paper literally includes the sentence “For example, the potential response of the Chinese government in the event of a South Korean intervention is an “unknown” worthy of discussion in any potential Korean war planning.”

At this point, I give up. When I started this whole ILE quest, I had nothing but free time. I had my chosen way to tackle this program picked out and teed up. Now I have a toddler, I'm on TDY for a functional area credentialing course, I'm in a master's program, I'm also in another optional PME program, I have work, and I'm writing these papers and getting nothing but nonsense and gibberish back.

“Babsfritchie” is a “meets course standards” graduate of the U.S. Army Command and General Staff College’s Intermediate Level Education – Common Core via Distance Learning who did not enjoy the experience. This article represents his own views, which are not necessarily those of the Defense Department.