UNSUNG HEROES: 12 Green Berets Who Took On Hundreds In This Epic Afghan Battle

The Shok Valley in Afghanistan’s Nuristan province is so impenetrable that during their nearly 10 year occupation of the country,... 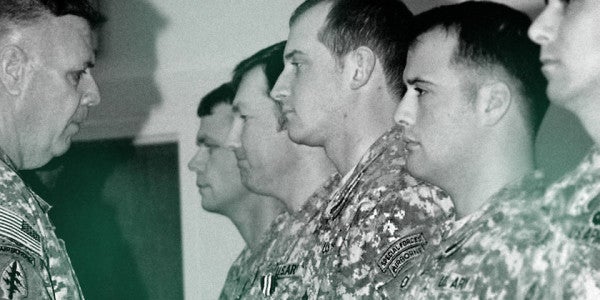 The Shok Valley in Afghanistan’s Nuristan province is so impenetrable that during their nearly 10 year occupation of the country, the Soviets never entered it once. And for the first seven years of Operation Enduring Freedom, no Coalition troops did either. So when, on the morning of April 6, 2008, a 12-man team of U.S. Special Forces operators with ODA 3336, 3rd Special Forces group jumped from a helicopter into the Shok Valley, they became the first members of a foreign military to step foot on the treacherous home turf of Hezb-e-Islami Gulbuddin, the notorious militant group that had controlled the valley for decades.

The firefight that erupted in the Shok Valley that day is one of the most harrowing battles ever waged by American operators during the war in Afghanistan. By the time the dust settled, four of the 12 Special Forces soldiers were critically wounded and 10 had earned Silver Stars for actions that left more than 150 insurgents dead in their wake. Eight years on, the Battle of Shok Valley, which was fought at an altitude of 10,000 feet above sea level, still ranks as the most award-producing battles involving U.S. operators of the Global War on Terror. And not a single American was killed.

Special operations units prefer to operate at night. This particular mission, however, began at daybreak. Unable to touch down on mountain’s jagged surface, the helicopter carrying ODA 3336 hovered while, one by one, the Green Berets leapt into an icy stream from a height of about 10 feet. Joined by a small group of Afghan commandos, their mission was to capture or kill several members of HIG, including the group’s commander. But the militants were prepared for a big fight. In fact, it was later concluded that HIG had been stockpiling weapons and ammunition for a moment just like this since the Soviet-Afghan war.

As the Americans took in their surroundings, they realized that the remote mountainside was alive with insurgent activity. And while the original plan was to fight their way down the mountain, instead of up it, they also realized that the helicopter had dropped them off about 1,000 feet below a village fortified with a series of fighting positions, including mud compounds bored with portholes for snipers.

“The buildings in the village are built one on top of the other, on top of a slope thousands of feet in the air,” Capt. Kyle Walton, the detachment commander, later told an Army reporter. “So we started the climb. The insurgents waited until the lead element was within a couple hundred meters of the compound before they initiated contact.”

The commandos were completely surrounded. Bullets began whipping in from virtually every direction, and with deadly accuracy. One immediately struck and killed the interpreter standing next to Walton. Another struck Staff Sgt. Dillon Behr, a communications sergeant, in the hip. Meanwhile, the lead assault force, which included Staff Sgt. David Sanders and about 10 other commandos, reached the village, where they, too, came under heavy fire. As reports of casualties came over the radio, Walton decided to call in close-air support.

“I called back to Sanders and asked if he was too close,” Walton recalled. “He said, ‘Bring it anyway.’ Bombs started exploding everywhere. When I called to see if he was still alive, all I could hear him saying was, ‘Hit them again.’”

Over the course of the firefight, the Green Berets called in a total of 70 danger-close air strikes. Several commandos were wounded by the shrapnel and debris that showered the mountainside with each explosion. But the insurgents were dug in so deeply that the air strikes did little to quell the attack. Rocket-propelled grenades, small arms, and machine-gun fire continued to rain down on the operators and their Afghan counterparts. The pilots circling above reported observing 200 armed insurgents closing in on their position.

The commandos fought back with a barrage of rifle fire, rockets, and grenades, but continued to sustain casualties. One soldier’s leg was nearly amputated by a round that struck him just below the right knee. “I literally grabbed my boot and put it in my crotch, then got the boot laces and tied it to my thigh, so it would not flop around,” Staff Sgt. John Wayne Walding later told The Washington Post. “There was about two inches of meat holding my leg on.” Another round grazed the helmet of the team’s medic. Master Sgt. Scott Ford, the team sergeant, was shot twice — once through the shoulder and once in the chest (the round didn’t penetrate his body armor). With nowhere else to go, a triage area was set up on the side of a cliff.

“We were pinned down,” Walton said “When the fire became so intense, we moved out onto a ledge against the cliff to protect our wounded. What turned the battle was Seth and his element.”

Staff Sgt. Seth E. Howard was the team weapon sergeant and a trained sniper. When the firefight began, he was further down the mountain and he and his element had to fight their way up. As Ford, who was bleeding profusely, began evacuating the most critically wounded soldiers, Howard took up position to cover their movement. By that point, the insurgents were so close the Americans could hear their voices, and the wounded had to be “leap frogged” down the mountainside between airstrikes. Meanwhile, Howard stayed behind, picking off insurgents.

“Seth was crazy enough to stay up there and cover us while we made the climb down,” Walton recalled.

Howard had less than a magazine of ammunition left when he joined his team en route to the stream where the operation had begun seven hours earlier. Many of the commandos had to jump off a 20-foot cliff on their way down. A MEDEVAC helicopter arrived but was only able to hover long enough to drop off a flight medic before being shot off the landing zone. On the second evacuation attempt, the bird landed in the middle of the stream, forcing the commandos to make a mad dash with the casualties through the icy water. “We should not have lived,” Walding told the Washington Post on the day he and nine other members of ODA 336 were awarded the Silver Star, the military’s third-highest award for valor.

“Our goal is never to get into a fight, we’d rather sit down and drink some chai,” Walton told the Army reporter. “We were hoping this mission would be the same, but we got into a big fight, and some of us got hit while trying to save each other. That’s what we do.”