"The VKS is simply never meant to fight the way Western air forces do.” 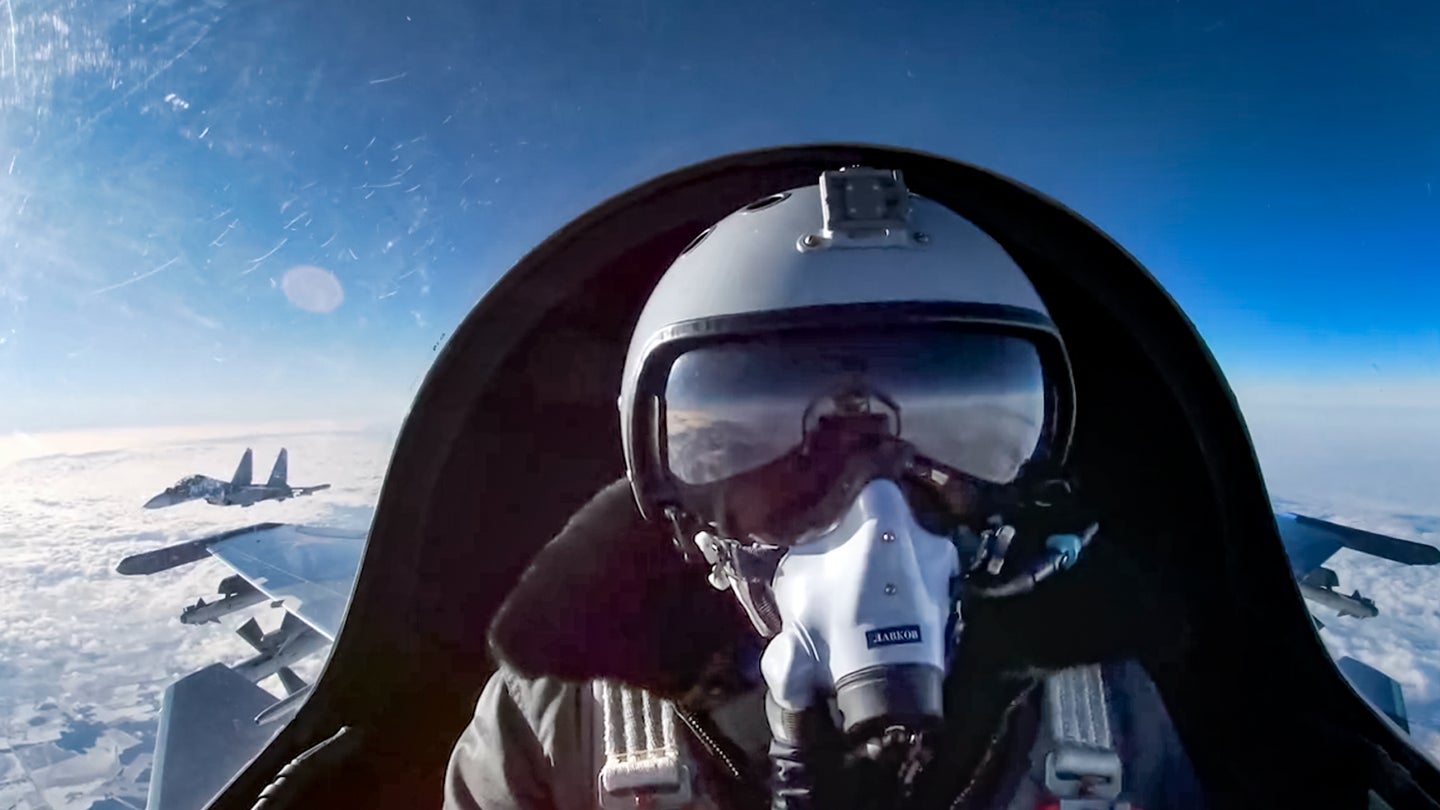 As the Ukraine-Russia war drags on, military aviation experts are noticing that anti-aircraft missiles like the Stinger and Igla are not the only threats Russian pilots face in the skies over Ukraine. In fact, a dangerous combination of doctrine, training and equipment is partly to blame for the heavy losses the VKS, the acronym for Russia’s air force, have sustained in the three-week-old war.

“Russia has not modified its ground-attack tactics and is conducting many of its attacks at low altitude, which puts Russian planes in the lethal envelope” of shoulder-fired man-portable air defense systems (MANPADs), wrote the Atlantic Council in an assessment on Wednesday, the same day low-flying Russian air tactics were covered by Forbes.

“Taken together, these factors have prevented Russia from establishing air superiority and fully supporting a ground invasion force,” the think tank added.

The exact total of Russian and Ukrainian aircraft lost so far is unclear. On the Russian side, at least 32 helicopters and 13 fixed-wing aircraft have been damaged or destroyed, though the Ukrainian Ministry of Defense claims to have killed 81 planes and 95 helicopters. Ukraine meanwhile is down to just 56 combat aircraft, after starting the war with 98, according to Flight Global’s 2022 World Air Forces directory. For context, the U.S. lost 27 fixed-wing aircraft and five helicopters in combat across five or so weeks during the 1991 invasion of Iraq in Desert Storm.

“Russia has still failed to establish air superiority and is suffering huge aircraft losses as a result,” wrote the Atlantic Council, which estimated that it was “highly unlikely” that either side would establish air superiority over Kyiv, Ukraine’s capital, or that Russia would be able to block Ukraine’s supply lines with air or missile attacks. Many outlets including Task & Purpose have written about Russia’s failure to achieve air supremacy, the term for making an enemy air force incapable of resistance, despite its combat air force being 15 times the size of Ukraine’s. But recent experts pointed out that may be intentional, as a result of Russian air doctrine.

To many American readers, not achieving air supremacy runs counter to the justified belief that air supremacy is vital to winning a conventional war like it was in World War II and Desert Storm. However, several Russian military experts say that the Russian air force does not have the same doctrine or guiding principles as their American counterparts.

“[T]he VKS is no ‘USAF East,’” wrote Austrian aerial warfare analyst and historian Tom Cooper in an essay for Aviation Geek Club on Friday. “The VKS is simply never meant to fight the way Western air forces do.”

Air forces come in all kinds of flavors. For example, in 2018, analysts at RAND noted how China’s People’s Liberation Army Air Force was moving away from its traditional focus of defending Chinese territory and towards a “strategic air force,” which can project power overseas independent of army or navy forces. The U.S. Air Force, with its global reach, deep pockets and robust industrial base, is capable of striving for similar goals. However, the smaller, poorer and less technologically sophisticated VKS, despite recent modernization efforts, does not have the same capability enjoyed by the U.S. Air Force, experts say.

In fact, senior Russian military leadership “considers the VKS for something like ‘extended range artillery,’” meaning it’s focused on providing close air support well within 100 miles of the front lines, Cooper wrote, not deep into enemy territory as the U.S. Air Force is trained to do.

“For this reason, the VKS has a purely supportive role, through and through: it is meant to — and equipped to — establish air superiority only over the frontlines, and then support ground or naval forces,” Cooper explained.

U.S. Army observers drew similar conclusions about Russian airpower and found that the strategy went way back to World War II. Unlike the Luftwaffe or the Royal Air Force, the Red Army Air Force was not an independent air arm, but was an auxiliary to the Red Army, wrote Dr. Lester Grau and Charles Bartles in a 2016 report on Russian ground forces for the U.S. Army. Though today the Russian air force, space force and strategic missile units are all part of the independent VKS, the service is still considered “a lesser branch” of the Russian military, and “has struggled” to keep control of its units away from the army, Grau and Bartles wrote.

All this goes to show that the VKS prioritizes tactical, close air support missions over strategic missions far from the frontlines. That’s all well and good, but Russian pilots are put at greater risk while trying to achieve this mission because of the technology they work with. While the U.S. Air Force has used precision-guided munitions to great effect since at least Desert Storm, the Russian air force has nowhere near the same quantity of so-called ‘smart’ bombs. Instead, Russian pilots must use unguided ‘dumb’ bombs. But to use them accurately, pilots have to fly low and slow, which makes them vulnerable to attack from the ground.

“This, combined with the lack of targeting pods to spot and identify battlefield targets from a safe distance, means that the VKS fixed-wing pilots’ capacity to provide close air support for their forces is limited,” wrote airpower expert Justin Bronk in a Feb. 28 essay for the United Kingdom defense think tank, Royal United Services Institute.

Cooper wrote that the lack of PGMs in Russia stems from the country losing many manufacturing contracts in the wake of its 2014 invasion of Ukraine. Now, VKS pilots must carry so-called dumb bombs at low altitudes and slow speeds to hit frontline targets, a perfect scenario for MANPADS-toting Ukrainian troops looking for a kill.

“The bulk of [Russian] aircraft losses are believed to be from surface-to-air missiles (SAMs), including from the mobile, long-range S-300 (aka SA-10) and [MANPADS] such as the Stinger missile supplied by the United States,” wrote the Atlantic Council. “Russia has not made the elimination of mobile SAMs a priority, nor has it pressed for the complete destruction of Ukrainian fighter aircraft.”

To make matters worse for the survivability of Russian pilots, VKS aviators have nowhere near the training or experience expected of most NATO pilots, Bronk said. Most VKS pilots get 100 hours or less of flying a year, which is about half flown by most NATO pilots, he wrote. They also don’t have the same advanced simulators for keeping sharp on the ground, and they rarely practice large air operations like those put on by the U.S. Air Force’s Red Flag exercise.

“In Western air forces … pilots are rigorously trained to fly complex sorties in appalling weather, at low level and against live and simulated ground and aerial threats,” Bronk explained. Jet pilots must also be able to hit targets within five to ten seconds of a scheduled time so that a complex strike package involving a large number of other aircraft can succeed.

Bronk’s analysis shows that even if VKS wanted to change its strategy and achieve total air supremacy over, its pilots may simply lack the skills to do so.

Russian pilots are not the only ones afraid of surface-to-air missiles. One Department of Defense official said on Friday that Ukrainian troops “are not using their fixed-wing fighter aircraft very much,” out of fear of Russian SAMs, Defense One reported.

It almost sounds like the World War I trenches, but in the air: where each side is reluctant to commit combat aircraft en masse for fear of being destroyed by the other side’s formidable air defenses. The airspace may get even more dangerous, as U.S. President Joe Biden promised on Wednesday to send hundreds of shoulder-fired surface-to-air missiles, thousands of anti-armor missiles and drones to Ukraine. Of course, like everything else in war, the situation could change any minute.

“VKS may suddenly start mounting large-scale complex air operations comparable to those routinely conducted by NATO states,” Bronk wrote. “If it does not, however, it will have profound implications for its potential combat power against Ukrainian forces in the coming weeks, and its value as a conventional deterrence tool against Western countries.”