After a long weekend day drinking, floundering in swimming holes, and inner-tubing in rivers — in between visiting the sights... 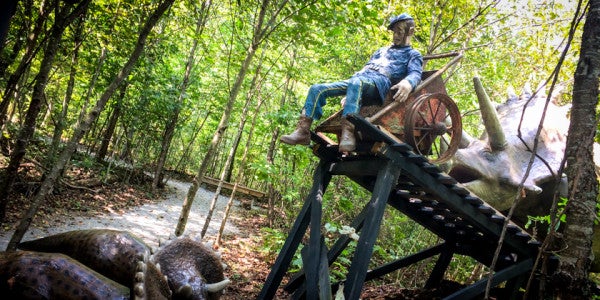 After a long weekend day drinking, floundering in swimming holes, and inner-tubing in rivers — in between visiting the sights from which the city of Natural Bridge, Virginia takes it name — I decided to make a pit stop at Dinosaur Kingdom II in late August to learn about that one time the Union Army tried to harness dino-power to win the Civil War.

The premise of Dinosaur Kingdom II is what you might get if Jurassic Park was a two-hour Nickelodeon special drawn in the style of Ren & Stimpy and set during the Civil War. Designed by Mark Cline, a local artist and celebrity who also runs Lexington’s Ghost Tour, the alt-history parody park is remarkably affordable, uncrowded this late in the summer, and an utterly rewarding mindfuck.

For the low, low price of $10 for adults (and $6 for kids), entering the park means stumbling back in time to an alternate 1864 when, according to the tourist destination’s website, “them wacky Yankees is at it again! Tryin’ to use living dinosaurs as weapons of mass destruction against the South. But ole Dixie has more than a few tricks still left up her sleeve.”

As you make your way through the park, there’s a Ken Burns’esque documentary playing in a ramshackle theater, and in it Cline describes the Union’s failed attempt to reawaken a menagerie of dinosaurs they discovered frozen in a cavern. The plan? To use the prehistoric reptiles as beasts of burden, and, unsurprisingly, as devastating tools of war. Those dastardly Yankees!

Too bad there wasn’t a 19th Century Ian Malcolm to warn the Union troops that “life, uh, finds a way.”

“The Yankee troops wanted to use these dinosaurs as weapons of mass destruction against the South. It kind of backfired on them,” Cline told VICE News in July. “And this is the story that was left out of most of the history books. So I’m trying to bring the story to light to make sure that history is told the way it’s supposed to be.”

Related: Fly Swatters Are For Suckers. Take The Little Bastards Out With The ‘Bug-A-Salt’ Instead »

And one of the ways history is supposed to be told, according to Cline, involves Stonewall Jackson tricked-out with a steampunk bionic arm doing battle with some misbegotten hell-beast in a graveyard.

I have no idea what’s going on here and I’m perfectly fine with that.

The park also includes pterodactyl named Squak who was sent to steal a draft of the Gettysburg Address from a flummoxed Abe Lincoln. The latter is not just a real exhibit in Dinosaur Kingdom II — it’s also a scene from a comic based on the theme park, written and illustrated by Cline. The comic even includes a detailed breakdown of how Stonewall Jackson’s mechanical arm works. (Spoiler: There’s a crew of miniaturized Confederate soldiers inside. I’m completely serious.)

A panel from Mark Cline’s Dinosaur Kingdom II comic book, and yes those are tiny Confederate soldiers, and a horse, inside Stonewall Jackson’s bionic arm.

Okay, so Dinosaur Kingdom II may not be entirely accurate, but who cares? It has dinos squaring off against Union troops armed with muskets; bizarre slime creatures; a cowboy corralling a herd of brontosauruses; and informational panels at each exhibit with, well, let’s call them alternative history facts. If nothing else, it’s a fun way to spend an afternoon, especially if you begin the morning with the hair of the dog.