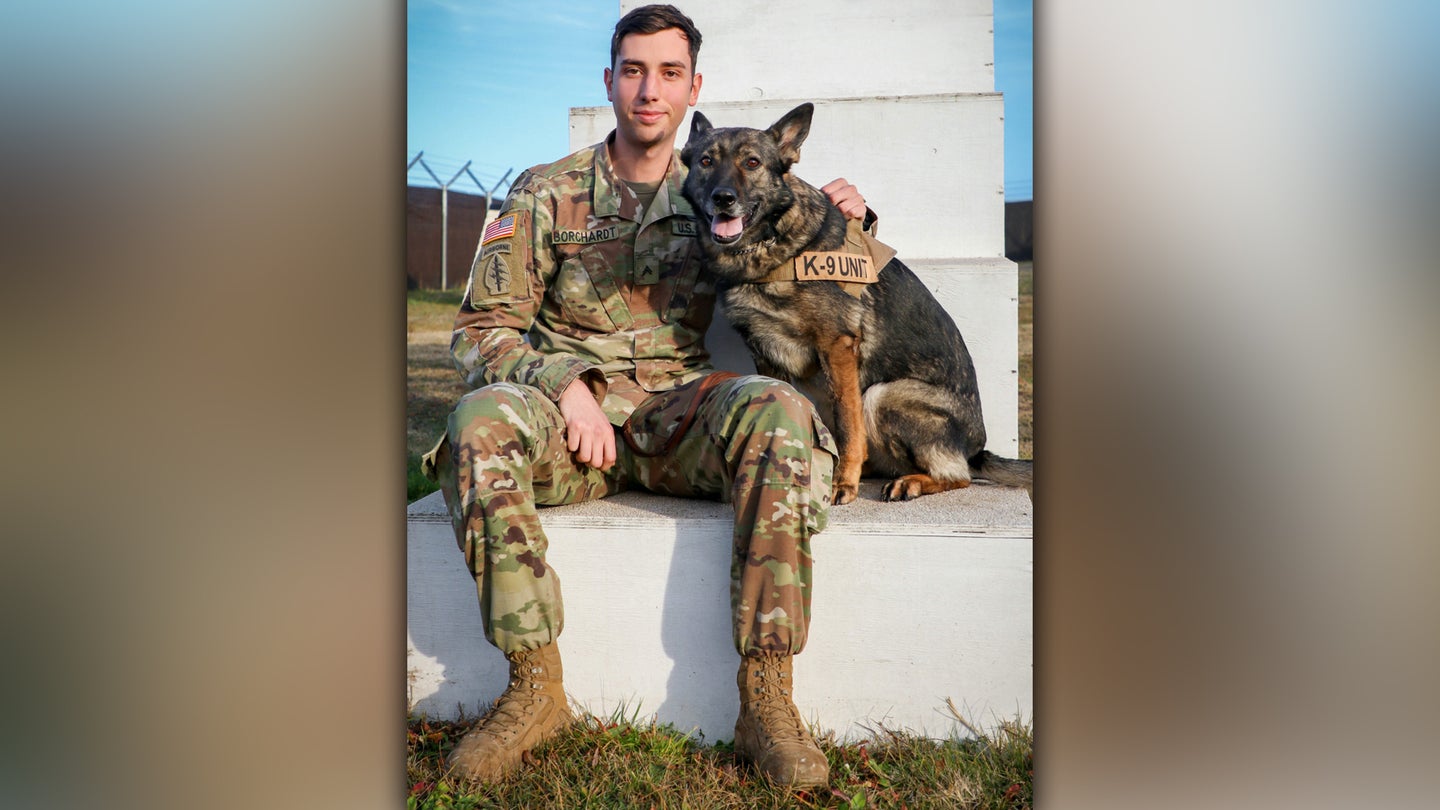 Some friendships are built to last, and one of them is between Cpl. Dustin Borchardt and his military working dog, Pearl. The two have been together for six years, an unusually long time compared to most handler-MWD relationships, Borchardt explained. But their friendship wasn’t always so stable.

“We showed up to Fort Campbell at the same time,” Borchardt said in a recent press release about first meeting Pearl. “I was absolutely terrified. She was less than a year old, jumping all over the place. I was fresh out of training, and I had no idea what I was doing.”

But soon the two got on the same wavelength. Over the year and a half they trained together, Pearl’s hyper puppy stage faded while Borchardt grew more confident in their abilities. They learned the skills of explosives detection, bite techniques and force protection.

Borchardt still remembers their first mission together: pulling guard duty at Trump Tower in New York City for then president-elect Donald Trump, where they stayed in a hotel room together for three weeks. After that, Borchardt and Pearl served on several secret service missions before deploying to Afghanistan with the 1st and 10th Special Forces Groups.

“Pearl had 30-plus confirmed finds ranging from homemade to military grade explosives, and multiple unconfirmed,” Borchardt said. “We were able to get everybody back home safe. We did our job and nobody got hurt.”

The soldier said Pearl saved his life multiple times in Afghanistan. The two has since been assigned to the 100th Military Police Detachment based in Stuttgart, Germany. Usually, military working dogs are assigned to one base for most of their lives, while handlers rotate between duty stations. But this pair is unique in that they’ve stayed together through multiple assignments. It’s gotten to the point where they can read each other’s body language.

“I just look at her and she knows what she needs to do,” Borchardt said. “I’ve picked up on her little mannerisms when she’s found something or when she’s excited. Flicks her ears, wags her tail.”

If Borchardt taps his chest, Pearl leaps up to plant her two front paws on him for a quick embrace as he pets her ears. As they walk, she matches his pace. At night, Borchardt often wakes up to Pearl laying on his chest like she’s still that growing puppy he met six years ago.

Borchardt isn’t the only one happy to have Pearl around. At Camp Bondsteel, Kosovo, where the two support a NATO-led peacekeeping mission, other soldiers stop to give her plenty of pets. Borchardt said Pearl loves the attention.

“Knowing there’s an explosive trained dog here helping keep everything safe is a big morale booster,” he said. “She’s definitely spoiled by the people on camp.”

After years of secret service and combat missions, the pair now spends most of their time searching vehicle traffic coming into Camp Bondsteel, Borchardt explained. They also sometimes go out with explosive ordnance disposal units and help with route and helicopter landing zone clearance missions.

“If there’s a special event, before COVID-19, we’d be involved with searching the event and providing security,” the soldier said.

But Borchardt has his eyes on a different mission someday in the future. When Pearl is too old to work, his plan is to adopt her and help her transition to the “couch potato life.”

“She’s the best dog in the world,” Borchardt said. “She’s got my back and I’ve got hers. It’s been a really amazing experience working with her, and I’ve loved every minute of it.”

Related: We salute ‘The Dude’ for being ‘the coolest military working dog ever’